The world's two leading university men's distance running systems each held some of their fall seasons' major events this weekend.  In the U.S.A.'s NCAA, 36 university teams lined up at the Wisconsin adidas Invitational 8 km cross-country meet, with other top teams competing at the Pre-Nats meet later in the weekend.  In Japan's KGRR, the 11th through 58th ranked university teams in the Kanto Region were at the Hakone Ekiden Yosenkai 20 km road race, with the top 10 teams in the region scattered elsewhere on the track and road.

It's not really fair to compare cross-country to road racing and even less so to compare 8 km to 20 km, but how do the results from Wisconsin and the Yosenkai look in relation to each other despite the inequalities?  Click to enlarge the tables below to find out.

In NCAA cross-country, teams run 7 men with the top 5 placers scoring. Team scores are based on placing instead of time, creating some irregularities where teams with a faster average finishing time can place lower than slower teams.  Winner Syracuse's 5 scorers averaged 3:00.6/km for the 8 km course, with 7th-place UCLA averaging 3:02.3/km and 10th-place Florida State averaging 3:02.9/km.

In other words, although NCAA teams were at a relative disadvantage in running on a cross-country course, the average pace of Kanagawa's top 10 men over 20 km was faster than UCLA's top 5 men over 8 km, while the top 5 schools at the Yosenkai all averaged faster than 10th-place Florida State with teams twice as big running 2.5 times as far.  Reducing the variables by one and looking at just the top 5 scorers on the Yosenkai teams and reordering both races' results by average pace produces a better, if still not perfect, comparison.

Yamanashi Gakuin's 5 fastest men averaged nearly a second per km faster than Wisconsin Invitational winner Syracuse's 5 scorers.  The second-fastest Yosenkai team, Koku Gakuin, was also faster than Wisconsin Invitational runner-up Iona, and likewise all the way down the top 10 each of the KGRR teams' top 5 scorers averaged faster over 20 km on the roads than the equivalent NCAA team's 5 scorers did over 8 km cross-country. 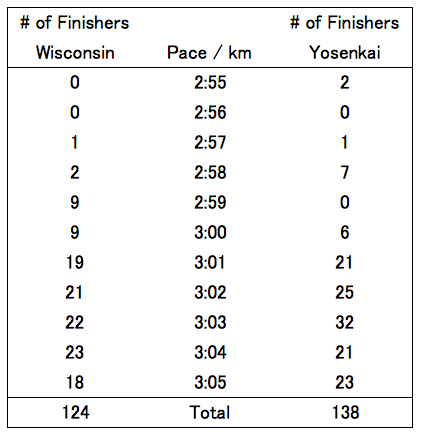 The main objection here is bound to be that cross-country is far tougher than road racing.  The Wisconsin 8 km course features at least 10 sharp turns and a series of hills with a maximum elevation difference of roughly 30 m and a net climb of around 5 m, all run on soft surfaces.  The Yosenkai 20 km road course does feature a large proportion of flat and straight sections but also includes at least 19 sharp turns and 2 more 180-degree turns, with small hills over the final 5 km and a net climb of around 10 m.  The Wisconsin course was no doubt harder, but the key question is whether the difficulty of the course was enough of an issue to offset the fact that Yosenkai competitors had to run 2.5x farther than their U.S. counterparts.

This doesn't seem likely as a sole explanation for the consistent pattern of slower performances at Wisconsin seen in the second table above, especially considering the unseasonably hot and sunny conditions at this year's Yosenkai.  To put it differently, if the Yosenkai teams were to run 8 km cross-country in a week or two, could they perform similarly to how they did over 20 km on the roads?  That seems reasonable.  If the Wisconsin Invitational teams ran 20 km on the roads in a week or two, could they replicate their performances over the much longer distance?  That seems much less achievable.  Taken together with the fastest-ever winning time by a Japanese man at this year's Yosenkai and its world record-setting depth both this year and last, overall the results seem to point to increasing success in long-distance development in the KGRR relative to the NCAA where, as Race Results Weekly's David Monti documented last year, considerable success has come in middle distances.

The question of whether what's happening in the KGRR is too much too young is a good one that will see its definitive answer 6 years from now in Tokyo.  In the meantime, the question could be better put this way: if you are a high schooler looking at colleges and dreaming of being internationally competitive as a miler, which system is more likely to get you there?  If your dream is to be internationally competitive as a marathoner which system will give you a better chance?

Metts said…
Very interesting article. As with your past analysis of US/Japan it should get some notice over at the other sites. Perhaps an econometric/statistical model can be developed that holds constant different sets of variables and attempts to measure the different university systems along with race distances and results.
October 20, 2014 at 9:07 PM

Christian said…
I read your Yosenkai coverage and watched some of the videos with wonderful memories, thank you!

Brett Larner said…
Nice to hear from you, Christian. In a more rigorous comparison that would be true, of course. Since coaches in the KGRR need larger teams than in the NCAA it goes without saying that they have bigger rosters to work with and that you'd expect sound coaching methods to produce a larger number of people performing at a higher level. A better comparison would be looking at the proportion of the total rosters from teams in each system reaching that kind of level, but that was beyond the scale of this post.

On the other hand, the difference in rank order between the 5-man and 10-man numbers for the KGRR results does show that in many cases the quality drops off somewhat after the top 5, so although it's not perfect there is still a rough comparison to be made. I hope to do a more accurate one later. Collaborators welcome.
October 21, 2014 at 6:40 AM

André Roukema said…
This is by far the best and most enjoyable apples and pears comparison I have read in a long time. Thanks!
October 22, 2014 at 3:55 AM

Anonymous said…
The Wisconsin race this year was held in windy conditions and, as a result, was relatively slow until almost 5km. It would be more appropriate to use the marks from other years when the competitors ran hard from the start. Also, the course was softer and the grass deeper this year. On the other hand, the course is probably 15 seconds short of 8km, or about 2 sec/km (unless they added a bit by moving the curve out at either (or both) of the bottom of the course or the curve before the 4km mark (first loop) and final straight (second loop). Someone not from Wisconsin commented on this; I have no idea if they are right.
October 22, 2014 at 12:19 PM

John Downes said…
Brett really good article. I think Japanese system way ahead as running 20k as compared to 8k. I know xc but even so. Well done. Keep up the good work. John.
October 23, 2014 at 12:56 AM

Anonymous said…
Great article comparing two very unique systems. Any chance you could ever get some sort of access to any of these Ekiden teams and maybe produce a "how they train" series? Just a suggestion, keep up the good work!
October 23, 2014 at 1:05 AM

Anna said…
As always, a thought provoking analysis.
One huge difference I experienced as a runner in Japanese middle school was the level of commitment that was demanded of us when we signed up for the sport. Quitting or doing a half ass job was considered embarrassing. If you weren't motivated, too bad, you had to work through it. That was part of the training.
I think in terms of a team sport, the Ekiden brings out the cohesiveness of a team sport better than XC. I know it's not strictly speaking part of the "system," but I'm sure the culture of accountability, responsibility, and maybe even "sense of duty" that emerges out of the interaction between Japanese culture and characteristics of the Ekiden have something to do with the depth of Japanese runners.
It would be interesting to extend the comparison to the HS level as a means to examine whether there is a case for too much too soon.
October 25, 2014 at 7:44 PM