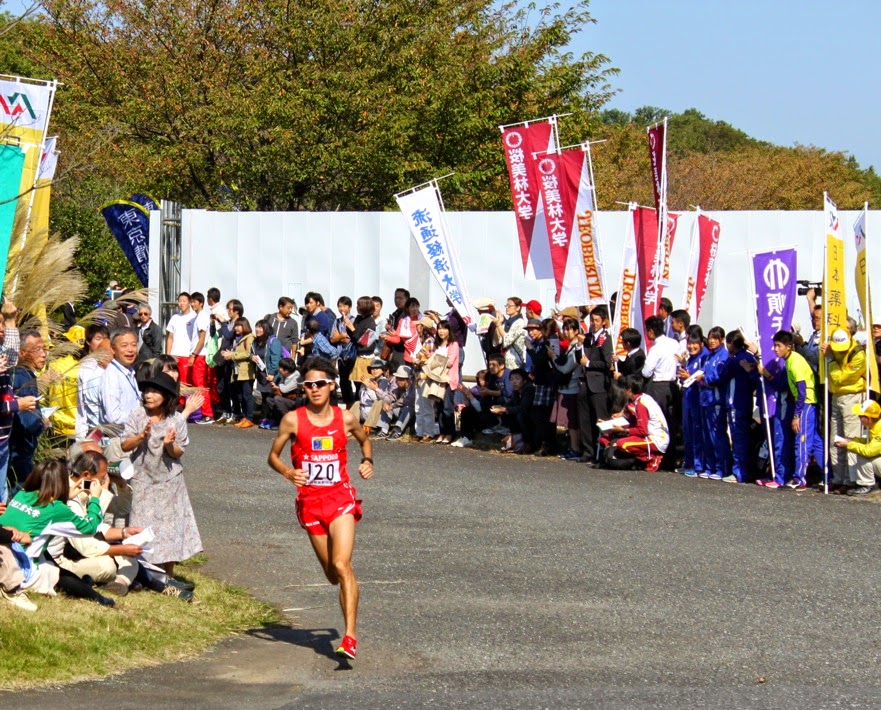 The qualifying race for the second tier of schools trying to make it into the Hakone Ekiden, Japan's most prestigious race, the Yosenkai is the world's biggest and most competitive 20 km.  Kenyan Omwamba won last year in 57:57, with Murayama 4th overall in 59:17.  This time Omwamba took things out fast enough, leading a front group including Hironori Tsuetaki (Chuo Gakuin Univ.) and first-year Kenyans Stanley Siteki (Tokyo Kokusai Univ.) and Lazarus Motanya (Obirin Univ.) through a 2:50 km as Murayama sat a stride or two back at the front of the 2nd pack. 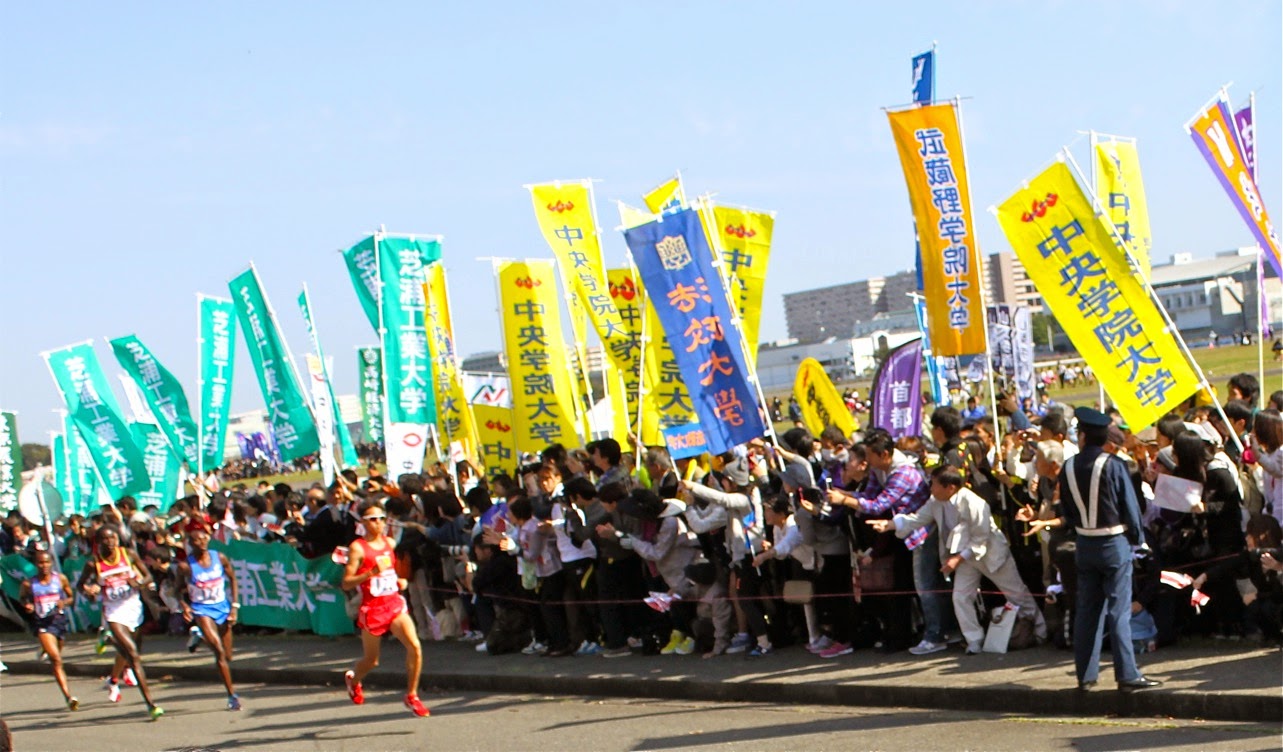 Just before 5 km Murayama took off, crossing the timing line 1st in 14:30 with Omwamba just behind and opening a steadily growing gap over the others.  Just before 6 km Omwamba briefly caught up and Murayama gestured for him to run next to him.  Omwamba shook his head, both laughed, and when Murayama surged again it was all but over.  Murayama, this year's Kanto Region 10000 m champion, 5th behind four African pros in a PB 13:34.57 late last month in the Incheon Asian Games 5000 m and the twin brother of #1-ranked Japanese collegiate Kenta Murayama (Komazawa Univ.), covered the next 5 km in 14:15, one hour-flat marathon pace, to hit 10 km in 28:45 just off his 28:42.09 track best.

Considering what was at stake, not just his own failure but his entire team's chances of qualifying for the legendary Hakone Ekiden, it was an incredibly risky move.  As temperatures continued to climb under cloudless skies he slowed but still pulled away from Omwamba, hitting 15 km on sub-58 pace in 43:26 with Omwamba 17 seconds back and the rest of the field almost another minute further behind.  A 57-minute time slipped away in the final 5 km, but Murayama was free and clear as he crossed the finish line in 58:26, the fastest time ever by a Japanese man at the Yosenkai by 14 seconds and the first Japanese win in five years.  A PB by nearly a minute, equivalent to a 1:01:38 half marathon.

And what was most notable was the way Murayama did, taking a huge risk in a critically important race, fearlessly attacking the best Kenyan on the college circuit and having the faith in himself to go it alone with none of the usual sit-behind-whatever-foreigner-is-in-the-race-and-try-to-hang-on Japanese mentality, the polar opposite of the kind of running seen from Japan's top pros around the world this fall in Berlin, Chicago, the Great North Run, Philadelphia and elsewhere.  And his twin Kenta is the same way.  Let's hope they don't have it crushed out of them when they head to the Asahi Kasei corporate team after graduating next spring. 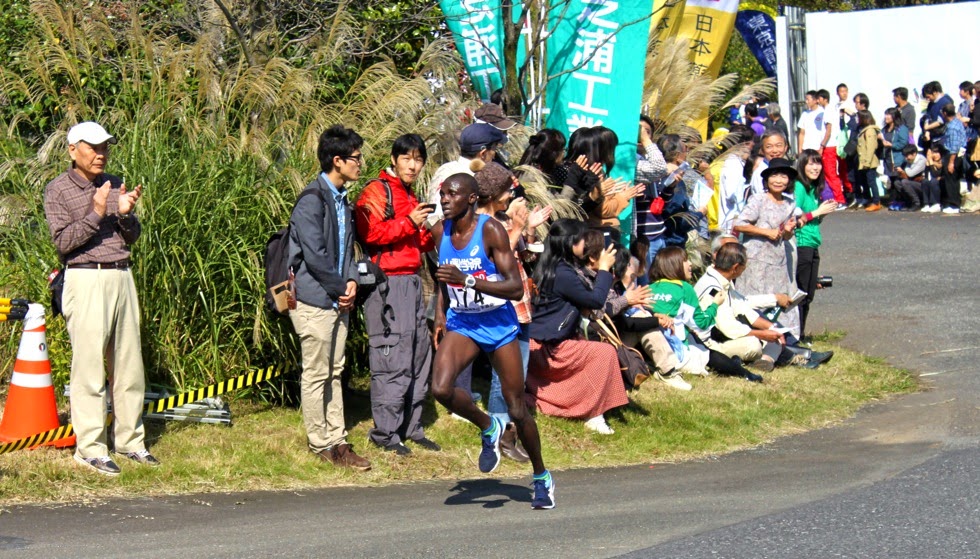 Omwamba, solid this season after recovering from the stress fracture that knocked both him and Yamanashi Gakuin out of this year's Hakone, closed on Murayama but was too far back to catch him, disappointed at taking 2nd in 58:34.  The next seven men worked together throughout the race, Masaya Kakihara (Kanagawa Univ.) getting away late in the race to take 3rd in 59:17.  Newcomer Siteki was 7th in 59:28, while Motanya, this year's Kanto Region D2 1500 m champion, faded to 58th in 1:00:57 in his debut over this kind of distance.

Mid-pack the field set new world records for depth, surpassing even last year's world record-setting race.  But more than the individual results the Yosenkai is about the team race, the ten teams that fight for their right to Hakone.  All throughout the race, at each checkpoint, team scores determined by the cumulative time of each school's best ten finishers were close, and in the final tally four schools finished within 46 seconds of each other on total time, less than 5 seconds per runner.  Ranked right on the cusp of picking up the tenth and final Hakone qualifying spot pre-race, Kanagawa University pulled off a shocker as it won the team race in 10:07:11 with a superb all-around team performance.  Pre-race darkhorse Koku Gakuin University also pulled off the hoped-for team performance to take 2nd in 10:07:18, while pre-race favorites Tokai University and Yamanashi Gakuin University went 3-4 in 10:07:31 and 10:07:57. 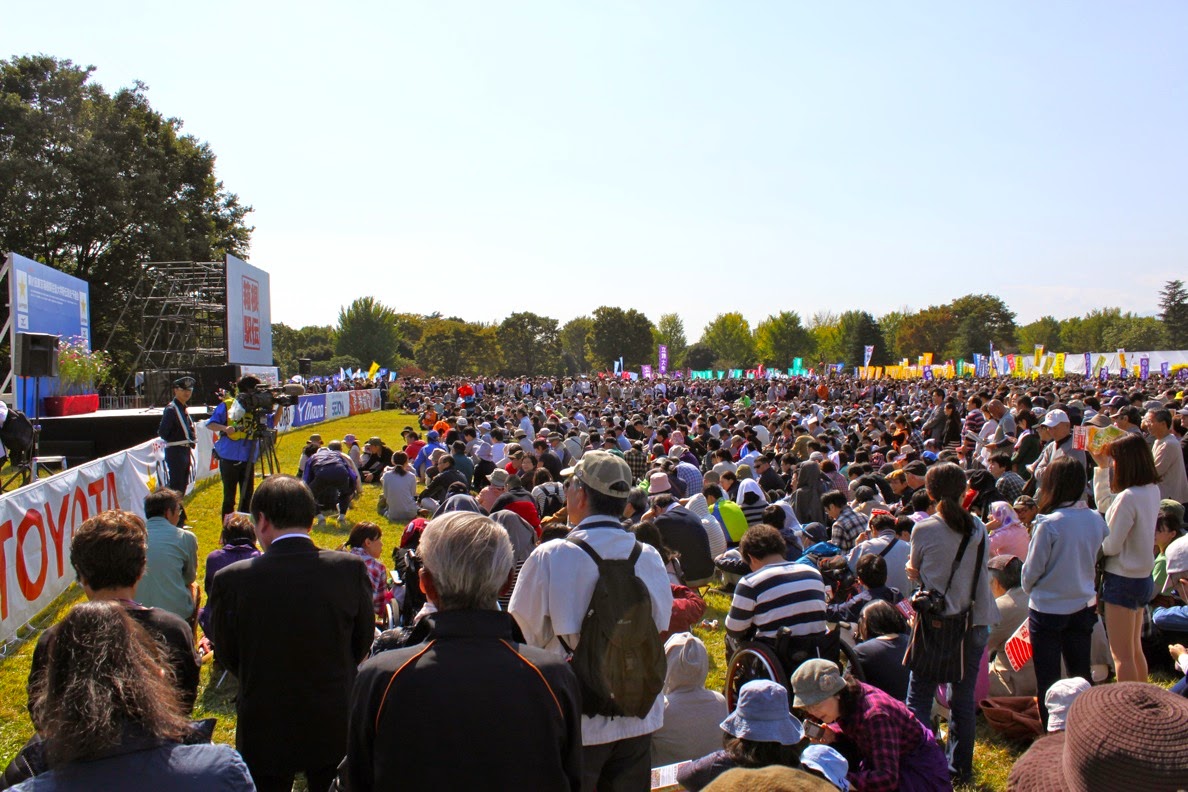 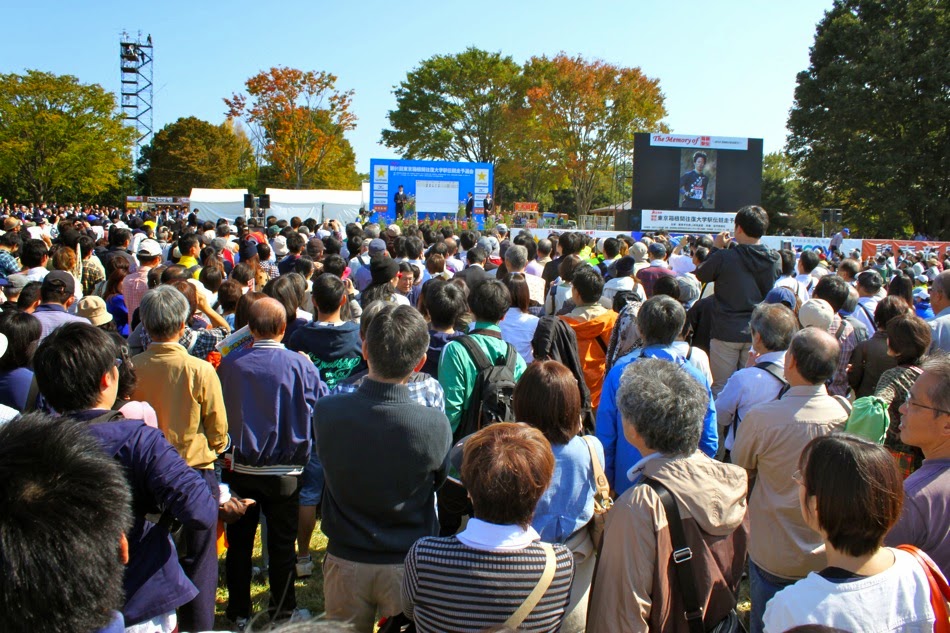 With one place to go last year's Yosenkai winner Tokyo Nogyo University and 2014 Hakone qualifiers Hosei University and Kokushikan University were still waiting with hearts in throats, but after an extended pause all got a shock as the minor Soka University, a pre-race longshot led by 6th-place finisher Shuhei Yamaguchi, took 10th to qualify for Hakone for the first time in its history.  Defending Yosenkai champ Tokyo Nogyo University was only 49 seconds back in 11th.  5 seconds faster per runner over the 20 km Yosenkai course and they would have been back in Hakone.  It was exactly the kind of surprise that makes the Yosenkai what it is, and the new blood can only add to the Hakone story in its 91st running on Jan. 2-3.

Eryn said…
The Yosenkai is the best spectator race in Japan: it is easy to see the runners twice, at the start on the airfield with all their supporters, pom pom girls and flags or at the 5K point, then in the park at 15K or finish, even for fast runners twice inside the park. And the teams are all waiting for the results at various points of the lawn. The suspense of the final results is absolutely amazing ! A must for all running aficionados.

Metts said…
Let's hope they don't have it crushed out of them when they head to the Asahi Kasei corporate team after graduating next spring.

This reminds me of one or two of the Komazawa runners who recently just graduated. After a year or two they seem to have digressed instead of continuing to improve. It might be related to the corporate league or heavy Komazawa training.
October 19, 2014 at 9:46 AM