Fukushima Native Kashiwabara Ahead of Senior Year Debut: "Let's Show Everyone What We in the Northeast Are Really Made Of" 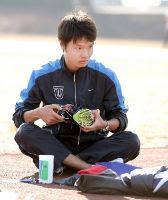 Having defined the last three years of Japanese university men's distance running with three straight wins on the Hakone Ekiden's legendary uphill Fifth Stage, Toyo University's Ryuji Kashiwabara, 21, will start his senior year off in the 5000 m at the April 9 Kanaguri Memorial Track and Field Meet in Kumamoto with the thought of his native Fukushima Prefecture held close to his heart. His house seriously damaged in the Mar. 11 earthquake and part of his home city of Iwaki falling within the 30 km emergency zone around the stricken Fukushima Daiichi nuclear reactor, the disaster has struck the "Mountain God" especially hard, but in announcing that he will run the Kanaguri Memorial Meet Kashiwabara has vowed to run a race that will help give courage to those still suffering back home in Japan's Northeast. For Iwaki, for Fukushima, for everyone in the Northeast, the Mountain God will run.
Kashiwabara's family survived unharmed, but their house was nearly destroyed. "When I look at the conditions these disasters have reduced everyone back home to," Kashiwabara says, "I'm overcome with grief. Right now, as we speak, all across the Northeast victims of the disasters are struggling just to survive. What I can do to help might be trivial in the overall scheme of things, but I want to give everyone at home and everyone in the Northeast at least one thing to be happy about, one thing to be proud of and take courage from. All I can give them is my running." Always plain-spoken, now more than ever Kashiwabara has shown his true heart.
Toyo University's head coach Toshiyuki Sakai, 34, also hails from Fukushima, and besides Kashiwabara many of the team's other runners come from the Northeast as well, meaning the disasters have shaken the entire team. With Toyo's training facilities in Kawagoe, Saitama having been rededicated to providing free meals for those afflicted by hardship in the wake of the disasters, the team has temporarily disbanded as Toyo athletes from prefectures west of Saitama have returned home. The current plan is for everyone to return at the end of next week and restart training.
With the whole country facing grave hardship, Kashiwabara, a nationally-known figure for the fortitude of spirit and fearless determination he has shown in conquering the mountains of Hakone, has decided to begin his senior season on the track amid circumstances that would perfectly understandably be too much for anyone. Also in the Kanaguri Memorial Meet 5000 m are World Championships marathon team member Hiroyuki Horibata (24, Team Asahi Kasei) and Japan's #1-ranked track runner, Yuki Sato (24, Team Nissin Shokuhin). Aiming for the 10000 m at the World Championships, it will be a critical race for Kashiwabara.
Entering his final year of university, Kashiwabara has been named captain of Toyo's ekiden team. Having already committed to the powerful Team Fujitsu following his graduation next year, he has set his goals high. Despite experiencing the hardships of the disasters firsthand, Kashiwabara refuses to let it bring him to a stop. Running from the spirit lending his body grace, Kashiwabara calls out to all survivors: "Let's show everyone what Northeastern soul really is, what we in the Northeast are really made of!"
Ryuji Kashiwabara: Born July 13, 1989 in Iwaki, Fukushima. 21 years old. 173 cm, 54 kg. As a student at Iwaki Sogo H.S. he failed to make any national-level championships, but he experienced a major breakthrough after entering Toyo University in April, 2008. At the 2009 Hakone Ekiden he smashed the stage record on Hakone's brutal uphill Fifth Stage and was instrumental in giving Toyo its first-ever Hakone win. In 2010 he again broke the Fifth Stage record and led Toyo to the win and followed up with another Fifth Stage win at this year's Hakone, leading to the nickname "Mountain God." Named captain of Toyo's 2011-12 ekiden team.