The 2009 Japanese National Track and Field Championships begin one week from today, and entry lists and a timetable are now available. As in past years, any athlete holding a World Championships A or B standard qualifying mark who wins his or her event will automatically be named to the national team for this summer's Berlin World Championships. Qualified athletes who do not win their event at Nationals will have to wait until the end of the qualification window later in the summer to find out whether they will be selected. A new element in this year's Championships is the inclusion of foreign-born athletes who reside in Japan, athletes who had in recent years been barred from taking part.

Some noteworthy details include:

Listed below are the top entrants in each event and the date and time of the finals. Athletes in red possess a valid World Championships A-standard, those in black a valid B-standard, and those in white have yet to qualify. Color marks in the PB column indicate whether the athlete has at some point in his or her career met the World Championships standards. Click on each list for a larger version. Click here for field event entry lists, here for complete entry lists in Japanese or here for a complete timetable in Japanese. 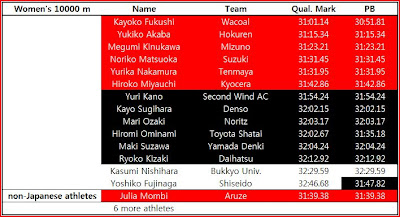 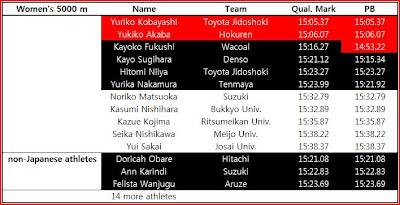 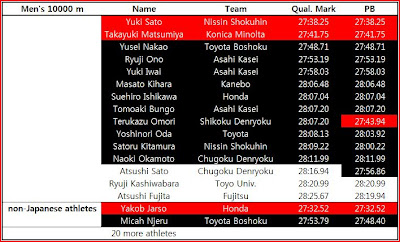 dennis said…
No Megumi Seike! She's finish ahead of Yuri Kano last year. She's one of the best ones. She's been injury free and has been training faster than noguchi. She has a great chance if she decides to run.
June 19, 2009 at 7:48 AM

dennis said…
How come no Mutsui Sumimoto Kaijo member run on the track? I thought they were a strong team. Yukato Eto and Miki Ohira should run track. Miki Ohira has 31:43.02 pb which is faster than Yoshimi Ozaki, Kayo Sugihara, and Yuri Kano.
June 19, 2009 at 8:43 AM