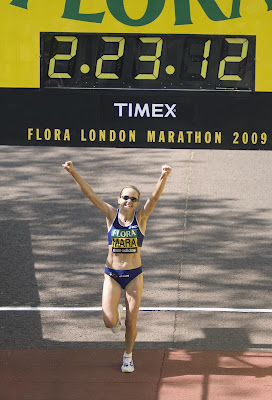 Japan-based and trained runners captured much of the spotlight at the 2009 London Marathon. Beijing Olympics gold medalist Samuel Wanjiru of Kenya, a graduate of Sendai Ikuei High School and former member of Team Toyota Kyushu, missed his goal of a new world record but won the men's race nevertheless, breaking both the course record and his PB with a finishing time of 2:05:10. Based on the outskirts of Tokyo, British runner Mara Yamauchi provided much of the fireworks in the women's race as she broke Japanese-coached Beijing bronze medalist Chunxiu Zhou of China and tried to do the same to German defending champion Irina Mikitenko. Yamauchi had to settle for 2nd behind Mikitenko, but it was an inspiring performance which saw Yamauchi finally break through past 2:25 and come close to her stated dream of a 2:22 as she finished in a large PB of 2:23:12. After losing touch with the lead pair, 2007 London champion Zhou, reportedly sick throughout the week leading into this year's race, sank back to a 12th place finish in 2:29:02. 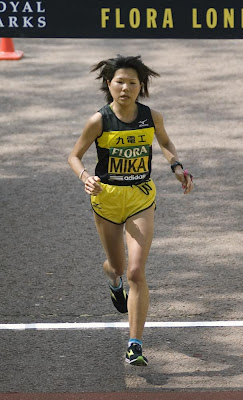 Thanks in part to a Rikuren rule change which allowed London results to count in the World Championships selection process, this year's London featured four elite Japanese runners, an unusual sight for a major marathon outside Japan. Even more unusually, Mika Okunaga (Team Kyudenko), an unknown even in Japan, caught some attention as she ran at 2:20 pace with breakaway trio Mikitenko, Yamauchi and Zhou, but by 10 km she was done. Swallowed up by the chase pack by 15 km, she ultimately finished 14th in 2:35:36 and missed her chance for a World Championships spot. 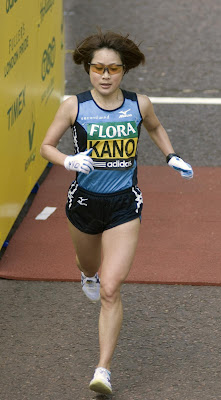 Ahead of her, Yuri Kano (Second Wind AC) ran a conservative race. Perhaps too conservative. Already assured of a place on the Berlin World Championships team, she stayed at the rear of the second pack for the entire race and fell behind when Russians Liliya Shobukova and Svetlana Zakharova and others accelerated in the latter stages. Kano finished just out of the money in both place and time, 11th in 2:28:44. She ran London to get some international experience ahead of the World Championships, but such a mediocre result was surely not part of the plan. 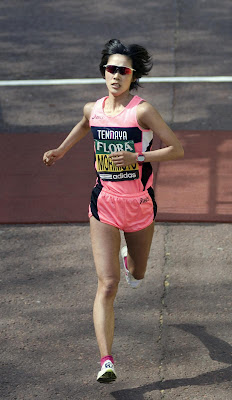 The top Japanese woman in this year's race was 8th place finisher Tomo Morimoto (Team Tenmaya). Like Okunaga, Morimoto needed to beat the 2:25:40 mark set by Osaka International Women's Marathon runner-up Yukiko Akaba (Team Hokuren) to make the World Championships team. She gave it a good try, running in the second pack with Kano and going through the halfway point in 1:11:55, but couldn't quite keep it together in the later stages. Morimoto slowed gradually and finished in 2:26:29. Her result means that Akaba will be selected for the Berlin team and, as in last year's Beijing Olympics, Morimoto will be consigned to alternate status purgatory. 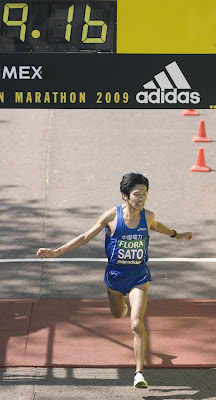 The lone Japanese man in the field had better luck. Atsushi Sato (Team Chugoku Denryoku) stuck precisely according to script as he worked his way back from the psychological breakdown he suffered in finishing last in the Beijing Olympics marathon. Sato, who holds a PB of 2:07:13, said before the race that he was only intending to go for a sub-2:10 clocking in London, a time which would give him the last spot on the men's team for the World Championships. He ran comfortably in the second pack along with 2007 World Champion Luke Kibet and 2006 London winner Felix Limo of Kenya, Americans Meb Keflezighi and Dathan Ritzenhein, Eritrean national record holder Yonas Kifle and others, going through halfway in 1:03:33. After Kifle took off in the hunt for stragglers falling off the lead pack the group's pace slowed, but Sato emerged as its top finisher as he outkicked Athens Olympics silver medalist Keflezighi for 8th in 2:09:16. Although Rikuren will not formally announce the World Championships teams until May 7, with this time Sato is assured of a spot in Berlin, his first World Championships since the 2003 Paris games.

Complete results for the 2009 London Marathon are available here.