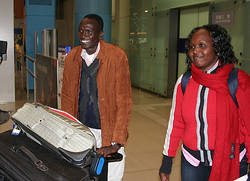 The Tergats arrive in Japan on Feb. 25.

Members of the invited foreign field for the Mar. 1 Biwako Mainichi Marathon began to arrive in Otsu's Biwako Hotel on Feb. 24 as race day draws near. The athletes' area at the hotel takes up two convention rooms on the hotel's third floor, with six interpreters speaking English, Spanish, French, Italian and Russian on hand to assist with the athletes' communication. The rooms face onto Lake Biwa and are well-stocked with sports drinks, bananas and oranges, offering a comfortable environment in which the runners can relax.

Taking 27 hours to arrive in Otsu from his home in Eritrea after a delayed flight, Yared Asmerom (29) told reporters, "I ran here last year, so I know it's a good course. I'll be going for a new PB."

Former world record holder Paul Tergat (29, Kenya) arrived at Kansai International Airport with his wife Monica on Feb. 25. After departing Nairobi the couple changed planes in Dubai before arriving. "Japan is very far," Tergat commented. The trip took 20 hours altogether, but Tergat spent much of the time talking with other athletes who came on the same flight, never losing his smile.

Tergat has run track races and half marathons in Japan before but this will be his first time running in a Japanese marathon. "I feel very, very happy to have the opportunity to run a marathon in Japan," he said. "The Biwako course is fantastic and I will give it my best effort. I'm praying for good luck on Sunday."

Paul Tergat became the first man to break 2:05 when he ran a then-world record of 2:04:55 at the 2003 Berlin Marathon. In 2007 Haile Gebrselassie (Ethiopia) broke Tergat's mark, but the Kenyan remains the second-fastest man ever.