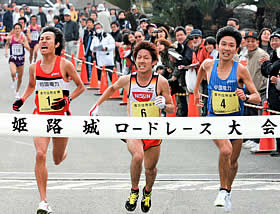 Terukazu Omori, Satoru Kitamura and Atsushi Sato in a photo-finish at the 2009 Himejijo 10-Miler.


Ten days after finishing two seconds behind half marathon Asian record holder Atsushi Sato (Team Chugoku Denryoku) at the Kagawa Marugame International Half Marathon, the diminuitive Satoru Kitamura (Team Nissin Shokuhin) came out on top at the 49th Himejijo 10 Mile Road Race in Himeji, Hyogo Prefecture on Feb. 11. The race came down to a sprint finish between the three runners with the fastest 10000 m times in the field after a slow early pace. Kitamura, Sato and Terukazu Omori (Team Shikoku Denryoku) all clocked times of 47:57, but the rookie Kitamura outleaned Beijing Olympics marathoner Sato and ekiden ace Omori to take the win. Sato was 2nd, with Omori taking 3rd.

Sato is planning on running April's London Marathon but commented, "I'm still don't really know how it's going to go, so I'm not sure yet." He plans to race next in March's Fukuoka International Cross Country meet and National Corporate Half Marathon Championships.