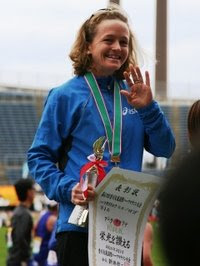 Japan-resident British runner Mara Yamauchi's strong 2008 continued on into 2009 as scored a resounding victory at the 2009 Kagawa Marugame International Half Marathon on Feb. 1, running a sixteen-second PB of 1:08:29 on the event's new course to win by almost a minute over her strongest competitor Yuri Kano (Second Wind AC), winner of the 2008 Sapporo and Rock 'n' Roll San Jose half marathons. General division runner Yoshiko Fujinaga (Team Shiseido) rounded out the top three, while Reiko Tosa (Team Mitsui Sumitomo Kaijo), running Marugame as a preparation run for her final race at next month's Tokyo Marathon, was a surprise 4th in 1:10:58. Times were fast overall with two women in the top eight besides Yamauchi clocking PBs and another three recording fast debuts.

In the men's race, Marugame record holder Mekubo Mogusu (Yamanashi Gakuin Univ.) led rival Kenyan student runner Daniel Gitau (Nihon Univ.) through the early stages of the race before easily dispatching him for a perfunctory 1:00:37 win nearly a minute off his 2007 time. Although Mogusu and Gitau said prior to the race that they were targeting 59 minutes, both runners are scheduled to run the Feb. 20 Ras Al Khaimah Half Marathon and may have been saving themselves for that race's more competitive field. Mogusu showed continued development as he did not overreact to the pressure of having Gitau tailing him through the first half of the race.

Asian half marathon record holder Atsushi Sato (Team Chugoku Denryoku) was a distant 3rd, winning a sprint finish against a dense pack of top Japanese runners, every single one of whom ran a PB. Sato never attempted to lead the pack, tailing the pack leaders throughout the race and then easily outsprinting all with 300 m to go. "I'm in the middle of marathon training," commented Sato afterwards. "I cleared my target for this race, so I'm satisfied. I could feel that I need to work on my stamina, though."

Complete results for the Marugame Half Marathon are available here.

Frank Stebner said…
Where can we find full rests for the Marugame Half Marathon?
Frank
February 2, 2009 at 11:44 PM

Anonymous said…
What the hell! Reiko Tosa has good form. Why don't she run the world championships?
February 3, 2009 at 8:18 AM

I guess she is doing Nagoya next month, also as a guest runner.

There's a link to results in the article, but the results page is hard to use if you don't read Japanese. When you go to the results page, two links appear in the middle of the page if you scroll down a bit. Choose the upper one. After that you have to input the bib number (1st box - ignore it) or place range (2nd and 3rd boxes, from place A to place B), then chose the division on the right (pro men, pro women, amateur men, amateur women), then click the button and the results, all in Japanese, will come up.
February 3, 2009 at 4:27 PM

Anonymous said…
Brett, love your blog. Has me very interested in running a marathon in Japan.
I am Canadian and a big fan of Jon Brown. I know he was on the startlist for this race, but I can't decipher the results to find him. Any chance you can pick him out of the results for me?
Many thanks.
February 5, 2009 at 1:49 AM

Anonymous said…
Maybe this sort of form will maybe convince Tosa to carry on competing. I don't want her to retire!
February 5, 2009 at 5:12 AM

Frank Stebner said…
Apparently Jon Brown had a not so good day and ran 1:17:48.

Not sure what happened but he was hoping for 1:03.

Brett Larner said…
Jon was up front with the pack of guys who ended up around 1:02:30 until about 15km. Looks like the next 5km was pretty rough: