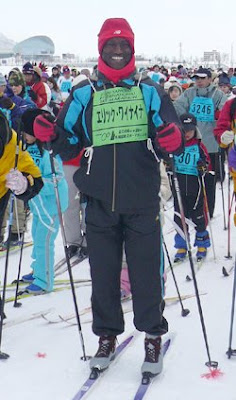 Two-time Olympic marathon medalist and longtime Japan resident Erick Wainaina of Kenya took part in a 3 km race last weekend where he fell six times and finished with a time of over 34 minutes, commenting afterwards, "It was my first experience and I had a lot of fun." Hearing just this you might think, "Whoa! What happened!?" The truth is that Wainaina wasn't running a road race but one on the snow at the 29th Sapporo International Ski Marathon, an event attracting elite and amateur athletes alike.

Wainaina was an invited guest in Sapporo's 3 km division despite only ever having been on skis once. Asked for his impressions after finishing the race, Wainaina said, "If I run 3 km it takes me between 8 and 9 minutes, but today it took 34:34. The muscles you use are completely different from the ones used in running."

Erick Wainaina
Wainaina came to Japan in 1993 after graduating from high school. He entered the famous Konica Minolta jitsugyodan running team, winning the silver medal in the marathon in the 1996 Atlanta Olympics. In 2000 he won the bronze medal in the Sydney Olympics marathon. He now uses the loop around Tokyo's Imperial Palace as the main ground for his training.