Speed Runner Mitsuya On His Way to Marathon Debut 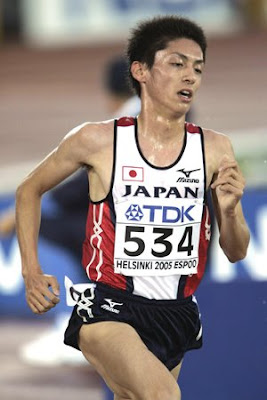 Entering the stadium with just 300 m left to go on the track, Mitsuya outkicked Kenyan leader and 2007 Karatsu winner Silas Jui (Team Nissan) to win by 6 seconds after dueling over the last 6 km of the race. Mitsuya raised his hands triumphantly as he broke the finish tape, smashing through the first gate on the road to his debut marathon. "I think Silas had a cold or something, but we'll see each other again in the [Kumanichi] 30 km race. That's where I really want to win," a sweaty Mitsuya commented afterwards, looking toward his first 30 km race with eager eyes.

This 10 mile race and the Feb. 22 Kumanichi 30 km Road Race are part of his development plan for a planned marathon debut next year, a series of tests designed to assign a value to his potential worth as a marathoner. Although strong winds of 16 km/hr prevented him from reaching his target time in Karatsu, being able to stay with a Kenyan start to finish and then having the strength and speed to outkick him makes his future in the marathon look bright. His coach Koichi Morishita agreed, giving Mitsuya passing marks. "He showed good racing sensibilities. Next the 30 km will be crucial."

As Mitsuya becomes a marathoner his consciousness of himself is also changing. After races and training sessions he has become more diligent about icing himself and about including stretching as part of his regimen in order to help prevent injury. In the past he has frequently had setbacks, but in the last year he has managed to avoid any extended periods of time off for injury. "I feel motivated to see how I can do in the marathon," Mitsuya says. "I think I'll be able to see a little of what it's like by doing this 30 km race. If I don't give it a try I can't know." Getting a sense of the reality of his situation in the Kumanichi 30 km, Mitsuya will be able to enter his marathon preparations with a realistic and concrete goal in mind.

Also running in the Kumanichi 30 km is Mitsuya's arch-rival Ryuji Ono (Team Asahi Kasei). The same age as Mitsuya, Ono likewise plans to debut in the marathon next year. Looking toward their showdown Mitsuya says, "I know he's working really hard too so I can't let myself lose to him. I'll be running for the win." First in Karatsu and then in Kumamoto, as this speed star runs Kyushu's roads all of Japan is waiting for his marathon debut.

Translator's note: Yu Mitsuya was born in Dec., 1984. He ran in the World Cross Country Championships in 2002 and 2004 and competed in the 10000 m in the 2005 Helsinki World Championships and the 5000 m in the 2007 Osaka World Championships. He was also the 2005 national 10000 m champion. Mitsuya is coached by Barcelona Olympics marathon silver medalist Koichi Morishita and was a teammate and training partner of Beijing Olympics marathon gold medalist Samuel Wanjiru before Wanjiru's retirement from the team. Mitsuya's PBs of 13:18.32 for 5000 m and 27:41.10 are the all-time third-best Japanese men's marks and the best times ever run within Japan by a Japanese runner.