Is Naoko Running Nagoya for Real!? Takahashi Training in Tokunoshima 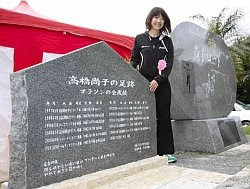 Naoko Takahashi stands between the two monuments in her honor on Tokunoshima island.

Sydney Olympics women's marathon gold medalist and former world record holder Naoko Takahashi (36, Phiten), who retired from professional running last fall, began training on the island of Tokunoshima in Kagoshima Prefecture on Feb. 19 for what she has up until now called a 'thank-you run' at the Mar. 8 Nagoya International Women's Marathon. Q-chan has said her goal for her 'final run' is simply, "to break 3 hours." However, she recently commented, "I'm really afraid that when the starting gun goes off I might get excited and try to run up front [in the lead pack] instead of going out as planned," suggesting the possibility that Nagoya might become a 'real run.' Takahashi was quick to add, "I'm going to try to hold back as much as possible."

Tokunoshima was where Takahashi trained for many of her greatest performances, including her national record win in her second marathon, her gold medal run in the 2000 Sydney Olympics, and her two Nagoya victories. Returning to a place with so many positive associations, Takahashi has been quick to recover much of her fitness. She originally planned to just do whatever training she could in the short periods between the jobs which have come her way in her new capacity as a television personality, but after watching last November's Tokyo International Women's Marathon from the outside as an announcer her thoughts changed. "I understood again that an athlete gives everything they have, and that they must understand their own strength. I don't want to run 'adequately' or 'easily.' I want to do it with all my ability."

This is Takahashi's third island training camp since her strength-draining appearances during the New Year season. For today's public training she wore a warmup suit, but as her laps of the course piled up Takahashi ran faster and faster. In the afternoon she wore t-shirt and shorts for a session of speedwork. "[The 30 reporters] watching were expecting me to just be jogging, so they were surprised to see me dress that way and I really felt the tension." Even accustomed as she is to being in front of the cameras, the excitement got into this great runner's blood.

As part of her stay on Tokunoshima, Takahashi attending the unveiling of a momument commemorating her eleven marathons in front of the Sunset Resort hotel. The new monument stands next to one already raised to mark the start point of 'Naoko Road,' the course she used in training for her marathon gold medal in Sydney. "I am deeply grateful that my achievements have been permanently recorded here and want to help other athletes use Tokunoshima as a springboard to competing around the world." Currently staying at the Sunset Resort as they prepare for Nagoya are Hitomi Niiya (20, Team Toyota Jidoshokki) and Chika Horie (28, Team Aruze).

At the end of March Takahashi will take up a full-time position as a sportscaster. Of Nagoya she says, "My only goal is to run the 42 km as hard as I can together with everyone else and showing my thanks to everyone watching along the course. There probably isn't much chance I can follow the lead pack." With her hopes expanding the Takahashi of today may still show us something special.

Translator's note: The Nagoya International Women's Marathon has not yet released its elite field, but below is a listing of athletes other than Takahashi who have declared their intent to run in this year's World Championships selection race edition. Indicated times are the runner's best within the past two years.

Anonymous said…
The nagoya field is really weak. Even the winner probably won't get selected. The door is open for Tahakashi to win. Maybe she can make a comeback.
February 25, 2009 at 2:59 PM

Anonymous said…
And I also wish Tahakashi would run Berlin. In 2005 and 2006 is a waste of year for her running in Tokyo. She should've run Berlin instead. Berlin is a special city for her. She set the WR there and yet she won't returned!!!
February 25, 2009 at 3:03 PM