Click here for a video digest and individual stage highlights of Hakone Day One. 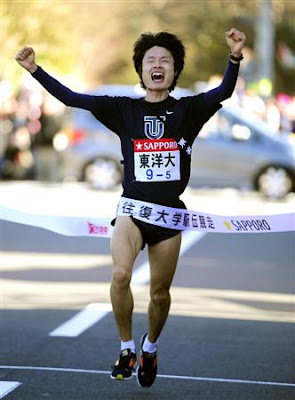 The first day of the 2009 Hakone Ekiden will be remembered as one of the greatest in the event’s 85 year history. After a slow, tactical first leg, runners set new records on all four of the remaining stages, the highlight of which was an awe-inspiring 47-second record on the mountain-climbing 5th stage by Toyo University first-year Ryuji Kashiwabara. Kashiwabara, who said before the race that his goal was to break the untouchable 5th stage record set in 2007 by his fellow Iwaki High School graduate Masato Imai of Juntendo University, ran fearlessly from the stage's start, coming from 9th place, 4:58 behind the lead, to overtake Waseda University and give Toyo its first-ever single day victory by a margin of 22 seconds. Kashiwabara covered the 874 m elevation gain 23.4 km course in 1:17:18, destroying Waseda anchor Masayuki Miwa after a fantastic battle on the steep downhill between 19 and 21 km.

Hakone never fails to surprise. Unshakeable defending champion Komazawa, the unquestionable favorite for the overall win, finished in 15th, a shocking 7:55 behind Toyo, after its 1st, 3rd and 4th stage runners bombed. Komazawa ran only two of its big names, 2nd stage ace Tsuyoshi Ugachi and 5th stage uphill specialist Sota Hoshi, both of whom excelled but could not make up the deficit created by the other three runners’ poor showings.

By contrast, almost all of the pieces fell into place for 2008 runner-up Waseda as its injured star Kensuke Takezawa delivered an incredible stage record performance on the 3rd leg and its ace first years Yo Yazawa and Yusuke Mita came through with stage-best performances. Mita's 4th leg run was also a new stage record; Teikyo fourth-year Keita Baba also broke the old stage record but was slower than Mita's mark. Olympian Takezawa beat rival Yuki Sato of Tokai University by 38 seconds, breaking Sato’s stage record by 32 seconds. Sato, like Takezawa recovering from injuries which sidelined him for most of the year, was 6 seconds off his own record, missing his chance to become the first runner in Hakone history to set four stage records. Waseda's 5th stage runner Masayuki Miwa was impressively steady, dispatching a challenge from Yamanashi Gakuin’s Muriyo Takase but unable to stay with Kashiwabara over the final 2 km after their downhill duel and ending in 2nd.

Yamanashi Gakuin’s Mekubo Mogusu broke his own record on the 2nd stage, just missing his goal of a sub-66 time with a world-class 1:06:04 clocking to become the first Hakone runner since Toshihiko Seko to break his own stage record. Mogusu put his team in the lead, but after Takezawa and Mita’s runs Yamanashi Gakuin dropped to 2nd. Yamanashi Gakuin’s 5th leg runner Muriyo Takase overtook Miwa halfway into the stage but then struggled on the steepest section of uphill, dropping to 5th place by stage’s end.

As great as Kashiwabara and Miwa's duel in the final kilometers of the 5th stage was, the greatest pure racing of the day was between Chuo Gakuin fourth-year Masato Kihara and Nihon third-year Daniel Gitau on the ace 2nd stage. Gitau started in second-to-last place, setting him to up to overtake 20 runners in a new Hakone passing record. Kihara, the only student member of the Japanese 2008 World Half Marathon team, attempted to become only the fourth runner to clock a 66-minute time on the 2nd stage, advancing rapidly through the field but then abruptly fading near the halfway point. He was overtaken twice by some of the runners he had passed, but both times he pulled himself together and retook his position in 2nd. Gitau overtook Kihara with 4.5 km to go, but Kihara showed deep grit, staying with the Kenyan star and retaking the lead three times during the final 2.8 km. With his final sprint it looked like he might pull off a miracle, but Gitau's speed was too much to handle as he went by Kihara with 100 m to go. For the second year in a row the 2nd stage finished with a new stage record by Mogusu, Gitau in 2nd, and Kihara in 3rd as the top Japanese runner.

A final run deserves special mention. Hiroyuki Ono, anchor of 2007 Hakone champion Juntendo University, started the uphill 5th stage in last place. Ono's run last year was the defining moment of the 2008 Hakone, the images of him lying face down on the road 400 m from the 5th stage finish unforgettable. This year he returned as Juntendo's captain and bravely faced the 5th stage once again, passing five runners to finish in 18th. Staring down his demons, he clocked 1:19:56 to take the 2nd best time on the stage behind only Kashiwabara's stage record run. In doing so he became one of literally only a handful of runners to break 1:20 on the stage, erasing the memory of last year and marking his name among Juntendo's greats in his final Hakone appearance.

Waseda is in excellent position for an overall win, still holding its best first year, Yuki Yagi, in reserve for the second day’s competition. Toyo, Nittai, Chuo Gakuin and Yamanashi Gakuin have all used their top runners and it will be difficult for them to compete with Waseda on the trip back to Tokyo. Komazawa typically puts its strongest runners on the second day, but with such a spectacular failure on the first day it is all but impossible for the defending champion to retake the lead. The best it can hope for is to make up the 2:02 gap to the seeded top 10. Should the mighty Komazawa fail to make the top 10 it will become the first defending champion in the Hakone Ekiden’s 85 year history to fail to score a seeded position. Chuo University and Tokyo Nogyo University are both within one minute of the last seeded position, making for a high-pressure battle on the Jan. 3 return run.

The 85th Hakone Ekiden continues on Jan. 3 at 8:00 a.m Japan time. The race will be broadcast live on NTV with a one-hour preview show beginning at 7:00 a.m. International viewers should be able to watch the race live online through this site.

Phil said…
Yesterday's race was absolutely riveting. Fantastic. Thanks to your preview last week, I had a good idea of which runners to pay attention to, which made it that much more fun to cheer Kashiwabara on his run.

Thanks as always for the excellent coverage.

Anonymous said…
Indeed it you who is to blame that I watched japanese distance running -- in the middle of the european night! ;)
January 3, 2009 at 2:52 PM

Eryn said…
And Nihon Daigaku's Gitau Daniel overtaking 20 runners in the second stage, starting 22nd, finishing 2nd, with a fight to the finish line. Amazing. A show within the show.

Happy New Year - thanks for the detailed updates. The NTV site is only for viewing in Japan. I am not in Japan this New Year but will follow the 'digest' on TV Japan here in the US next weekend.