Shibui vs. Radcliffe and Akaba vs. Goucher

Although it is always difficult to compare performances in different races, the results of the top finishers in this past Sunday's Osaka International Women's Marathon had interesting parallels to those from November's New York City Marathon. New York's course is generally perceived as more difficult, but both courses feature significant up-down. Apart from New York's uphill start, both courses' major hills occur on the sections between 13 and 15 km and between 24 and 27 km, with rolling net uphill in the final 5 km. Osaka's course also has a significant hill at 31 km. 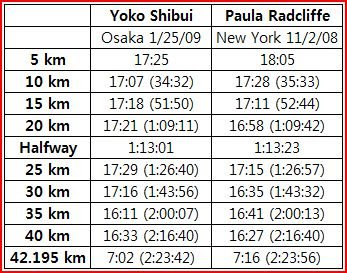 While the Osaka race held a relatively steady pace through 30 km, New York began slowly and progessively built up through 20 km. The pace slowed going over the 59th St. Bridge at 25 km, but after coming off the bridge Radcliffe accelerated, holding a higher tempo of 3:19-3:20/km for the next 10 km, accelerating to 3:17/km from 35-40 km, then fading to 3:19/km in the final stretch.

Shibui waited until nearly 30 km before picking up the pace from an average of 3:28/km to 3:14/km through 35 km, slipping back to 3:19/km through 40 km, then closing with her fastest splits, averaging 3:12/km for the last stage. Although Shibui's times led Radcliffe's until 25 km, the two runners' relative positions flip-flopped for the rest of the race with an identical clocking of 2:16:40 at the 40 km mark.

As another way of looking at the splits, both runners clocked 3:27/km for the hilly 5 km leading into their spurts. Shibui then dropped down to 3:14/km followed by 3:19/km versus Radcliffe's 3:19/km and 3:20/km splits for the two 5 km sections following the winners' attacks. Radcliffe timed her move earlier and had to run an additional 5 km at higher pace; whether Shibui could have gotten away with timing her surge earlier like Radcliffe and running the 25-30 km section through Osaka Castle 30 to 45 seconds faster is a valid question. Given the strength shown in her closing kick and the energy with which she jumped around celebrating her win, the answer is probably yes. Shibui's closing kick surpassed that of the world record holder and was all the more impressive for having taken place during sleet, making her prospects at this summer's World Championships very enticing indeed. 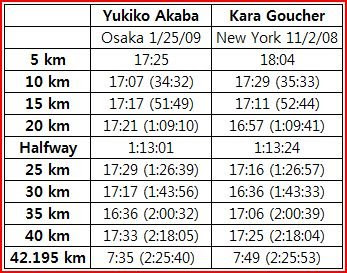 In the case of debutantes Akaba and Goucher, both runners stayed with the eventual winners until the big moves at 30 km and 25 km respectively. Each runner accelerated from 3:27/km pace to 3:19/km for the next 5 km, then by 40 km faded to 3:31/km in Akaba's case and 3:29/km in Goucher's. Like Shibui and Radcliffe's 40 km tie, Akaba and Goucher's 40 km marks were only one second apart. Again paralleling the winners, Akaba kicked back down to 3:27/km for the last 2.195 km during sleet while Goucher sank to 3:34/km, her slowest of the race apart from the leisurely first 5 km. Akaba finished 1:58 behind Shibui, while Goucher finished 1:57 behind Radcliffe. With both Akaba and Goucher debuting as part of a buildup plan to the London Olympics it will be interesting to track their development in coming years.

Nobby Hashizume of the Lydiard Foundation has another analysis of Shibui's performance here.