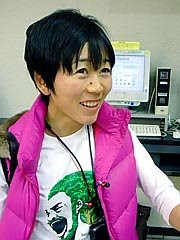 Mizuki Noguchi (30, Team Sysmex) returned to Kyoto on Jan. 7 from a training camp on Amami Oshima island after carrying out her first full training since withdrawing from the Beijing Olympics women's marathon with an injury to her right thigh. "I did everything that was on the schedule," commented Noguchi.

Since her original injury on July 25 the pain in Noguchi's leg has come back each time she has restarted her training. Prior to the training camp her longest daily mileage since the injury had been 18 km. Noguchi described her training while on Amami, saying, "Both the time and distance I've been able to run have increased. I got up to about 40 km a day." All of her training at the camp, including interval workouts, was pain-free, a big step on her road back to recovery.

Her personal trainer Hisakazu Hirose, who accompanied Noguchi on the training camp, described her plans for the spring. "We hope that she'll be ready to race 10000 m or a half marathon in April or May." Noguchi's team is targeting the April 26 Hyogo Relay Carnival and May's Kansai Jitsugyodan Track and Field Championships as another step toward a full comeback at September's Berlin Marathon. Noguchi was positive about her outlook. "I want to get myself into a position to be able to run a great race this year."

Up next for Noguchi is a 20-day training camp organized by Rikuren in New Zealand beginning in early February. Nine jitsugyodan women including Noguchi, Beijing Olympics marathoner Yurika Nakamura (Team Tenmaya), Beijing Olympics track runner Kayoko Fukushi (Team Wacoal) and 2009 Berlin World Championships marathon team member Yoshimi Ozaki (Team Daiichi Seimei) will take part in the camp. The camp program is designed to give younger, developing marathoners the chance to train alongside top runners and to experience the demands of becoming the best. A Rikuren official commented, "This is the beginning of the preparations for London. We want all the best jitsugyodan women to come together to see how Noguchi trains and to motivate each other."

Anonymous said…
Mizuki Noguchi barely runs any marathons since athens. I'm just so sick of waiting 2 years for her to run 1 little marathon in Tokyo. She never race against world class athletes like Paula Radcliffe. She needs to run big city marathons not races in Japan only.
January 14, 2009 at 8:35 AM

Anonymous said…
Mizuki Noguchi thinks she's so good at running but seriously I'll bet if she'll race against Paula again she'll lose. After Beijing I think her career is over just like Naoko Takahashi. She doesn't seem motivated. I doubt she'll even run London olympics.
January 14, 2009 at 8:39 AM