It was a pretty good year for the Japanese men, in the marathon at least. Not so much on the track and less so in the half marathon, but very decent in the marathon. 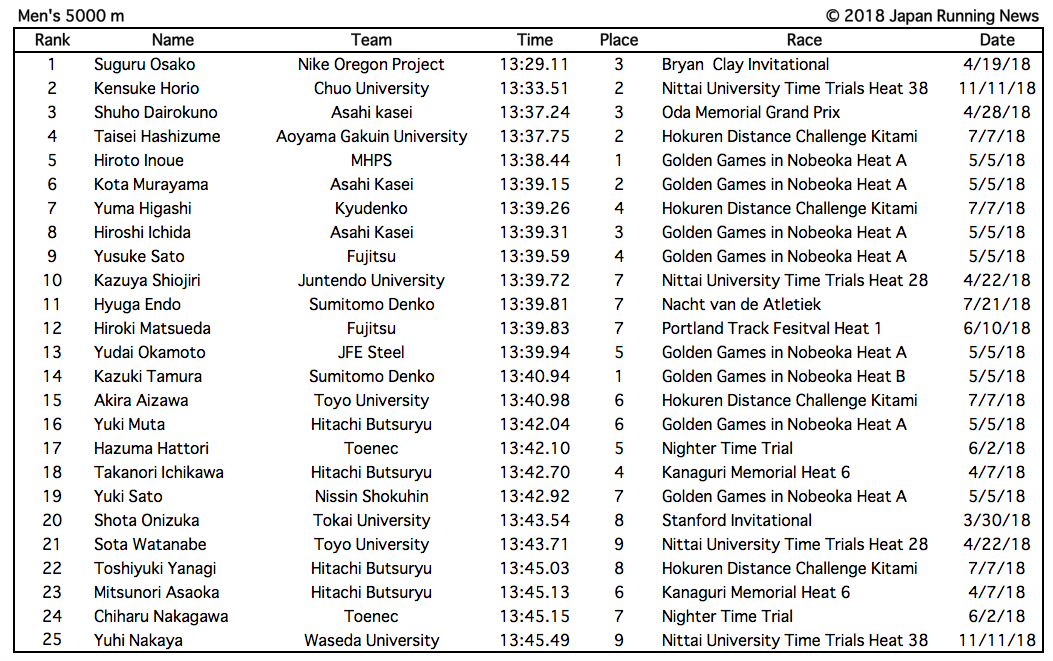 On the track, the fastest 5000 m time was only 13:29.11 by national record holder Suguru Osako (Nike Oregon Project) and in the 10000 m 27:55.85 by all-time #2 man Tetsuya Yoroizaka (Asahi Kasei). With the IAAF announcing 13:22.50 and 27:40.00 standards for next year's Doha World Championships after doing an about-face on its plans to base everything on world rankings it's pretty likely that, for the second World Championships in a row, there won't be a single Japanese man running either distance. 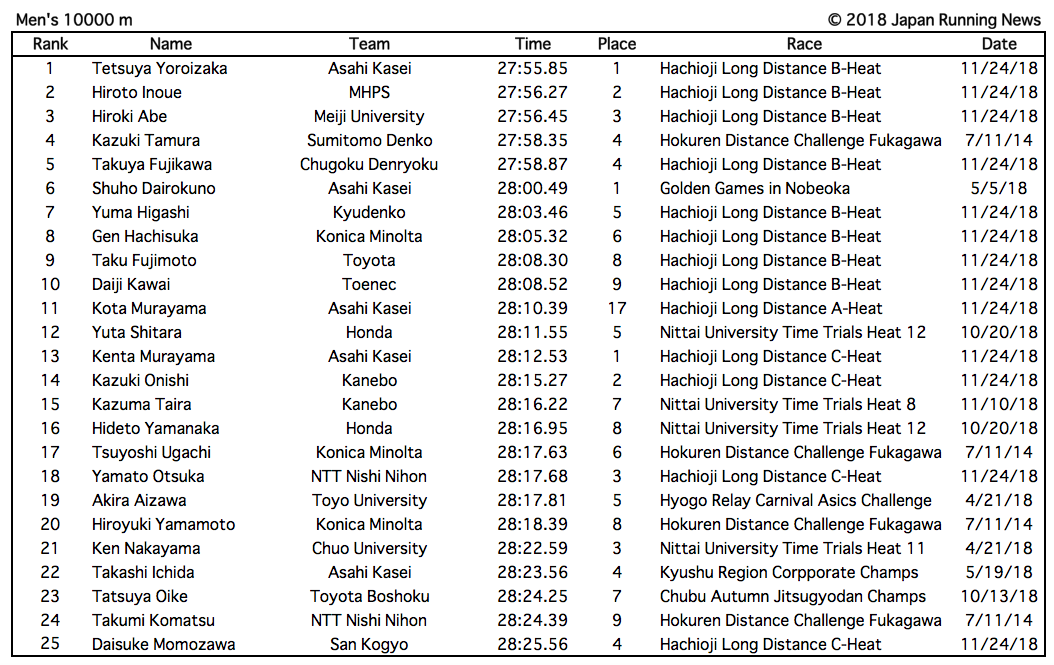 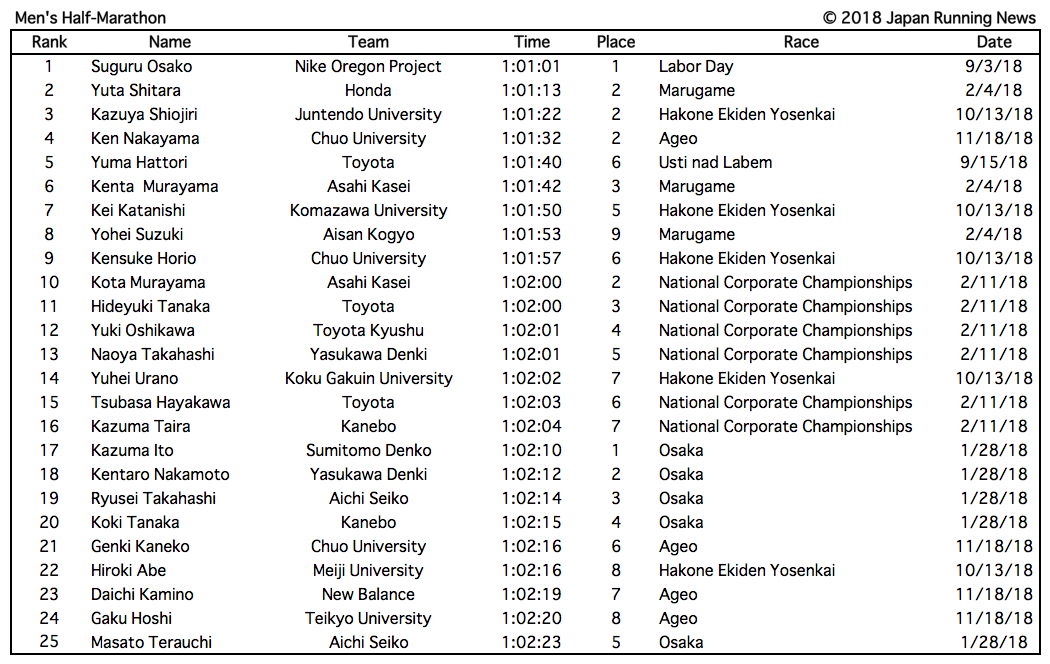 The situation was better in the half marathon. Nobody under 61 minutes for the first time since 2013 but 9 men under 62 minutes, 4 of them university students running in 3 different races. Depth of quality has remained solid on the university circuit, so based on past trends Japan should be keeping on like it did in the marathon this year at least through Paris 2024, probably through Los Angeles 2028 as long as the motivation stays where it is. 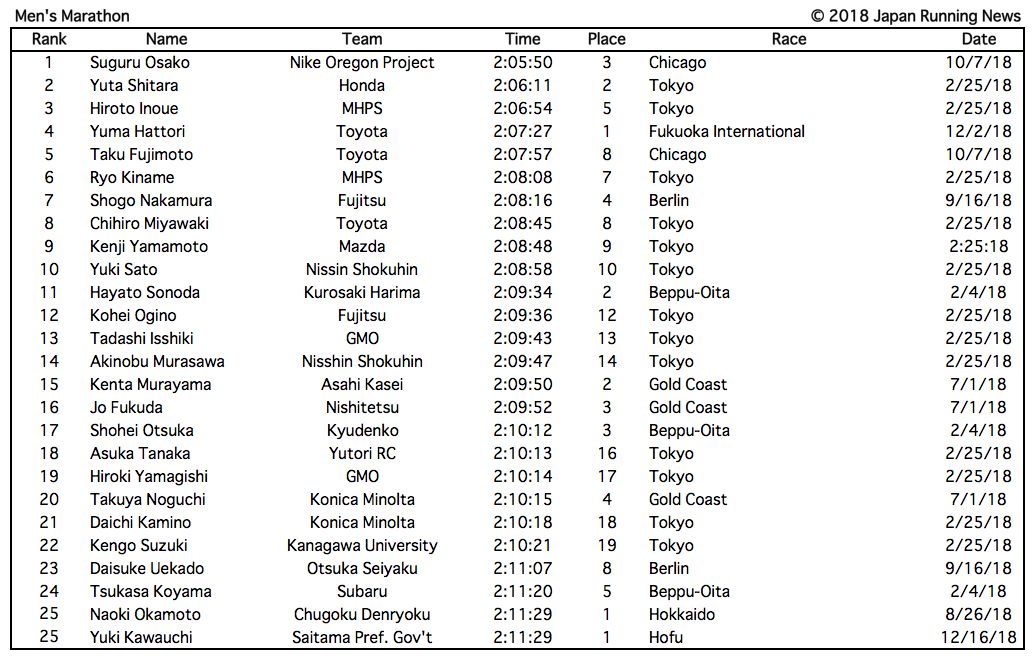 It was pretty obvious that this kind of surge in mass quality was coming, the MGC Race pushing it a little earlier than I expected when I wrote 3 years ago about the shape of things to come. But it wasn't just about depth this year. There were a lot of fast individual performances. Yuta Shitara (Honda) running 2:06:11 for 2nd in Tokyo to break the 16-year-old national record in what was at the time the best-ever placing by a Japanese man in the Abbott World Marathon Majors. Hiroto Inoue (MHPS) right behind him in 2:06:54 with teammate Ryo Kiname (MHPS) just missing a sub-2:08 at 2:08:08. Osako following Shitara's lead with a 2:05:50 national record in Chicago, and the likable Taku Fujimoto (Toyota) running a widely overlooked 2:07:57 behind him. Fujimoto's teammate Yuma Hattori (Toyota) scoring the first Japanese win in Fukuoka since 2004 in 2:07:27 with a really, really impressive finish.


And it wasn't just about times either. No top-level Japanese men ran London or New York, but of the 4 Abbott World Marathon Majors that had them the scorecard looked like this:

Add in Inoue's gold medal in heat and humidity at the Jakarta Asian Games, Japan's first in 32 years, and Hattori's Fukuoka win and the prospects for Tokyo 2020 are looking very decent indeed. At least 6, maybe 8 good contenders for the team at this point, only half of them getting there in Vaporfly 4%, and there's still the chance of a couple more popping up in the last few months of MGC qualification.

It's notable that of the 21 men to have qualified for the MGC Race so far, not a single one runs for hallowed old-school marathon stable and 2-time defending New Year Ekiden national champion Asahi Kasei. Rio Olympics team member Satoru Sasaki is probably the only Asahi Kasei runner with a realistic chance of making it, but the chance of him or anyone else on Asahi Kasei's current roster beating the favorites next September looks slim at this stage. This year put the nail in the coffin of the corporate league and national federation old boys' pet theory that the Hakone Ekiden is ruining Japan's marathoners, but Asahi Kasei's struggle to translate success at shorter distances into viability in the marathon shows that the question of whether the New Year Ekiden is getting in the way remains open. 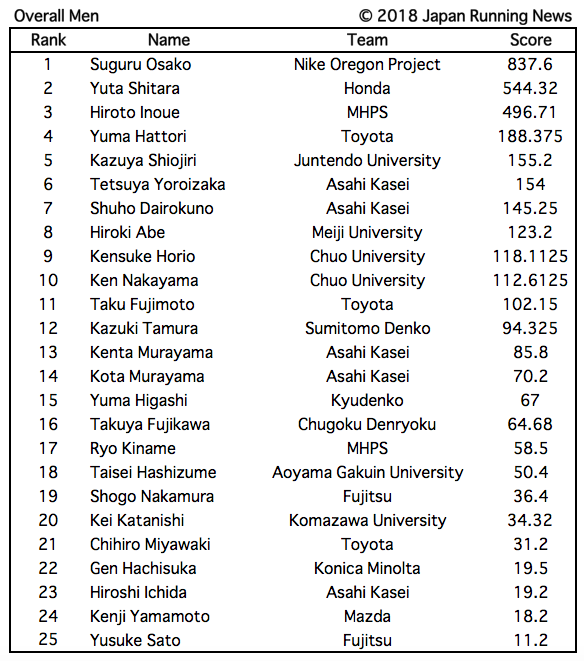 In overall rankings Osako topped the list for the first time since 2013 with the fastest times of the year for 5000 m, half marathon and marathon, Shitara and Inoue placing 2nd and 3rd. Osako started and finished the year as the Nike Oregon Project record holder in the marathon. University men took 4 of the top 10 spots, a first, with corporate league runners, two from Asahi Kasei, filling out the other half of the top 10. Nao Kazami (Aisan Kogyo) didn't fit into the scheme of things but deserves special mention for his 100 km world record in June, with fellow ultra guys Hideaki Yamauchi and Takehiro Gyoba taking gold and silver at the 100 km World Championships. Special mention also to Kazuya Shiojiri (Juntendo Univ.), the fastest of the 4 university men under 62 minutes in the half marathon this year at 1:01:22, who also took home a medal with Asian Games bronze in the 3000 m SC.