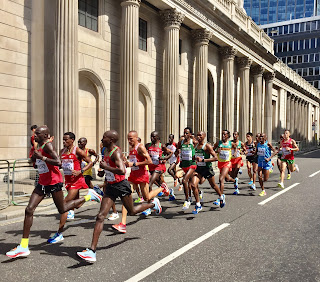 In the men's marathon civil servant runner Yuki Kawauchi (30, Saitama Pref. Gov't) missed top eight by just 3 seconds, finishing 9th. Mao Kiyota (23, Suzuki Hamamatsu AC) was the top Japanese woman at 16th. It was the first time in the 22 years since 1995 that no Japanese marathoners male or female made the top eight in a World Championships marathon.

Translator's note: Although the numbers are impressive, it's worth noting that the World Championships marathon ratings were a fraction of the normal viewership for the Jan. 2-3 Hakone Ekiden, where the two-day, roughly fifteen hour broadcast of the university men's road relay averages around 30% ratings.