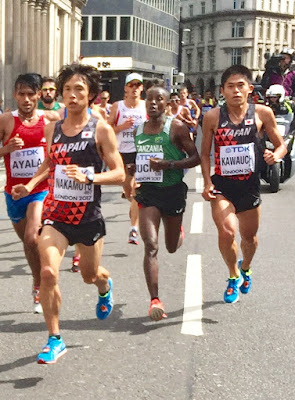 Coming from behind after a mid-race fall, team captain Yuki Kawauchi took the top Japanese men's spot in the London World Championships marathon, running down teammate Kentaro Nakamoto in the final kilometer to finish 9th in 2:12:19.

In the early stages of the race the experienced Nakamoto and Kawauchi held back mid-pack while younger teammate Hiroto Inoue stayed near the front. Midway through the second lap Kawauchi took a drink bottle at one of the aid stations and, while drinking, hit his left thigh on a sign protruding from the next table, the signs inexplicably changing at exactly that point from overhead to waist-hieght obstacles on the course. The impact was hard enough to cut Kawauchi's leg but not enough to slow him down.

When the big move came early in the third lap Nakamoto led the charge in pursuit, the three Japanese men running single file, but Inoue quickly losing touch. Near the top of the short S-curve uphill near 23 km Kawauchi abruptly stumbled and fell, and by the time he got up Nakamoto was over 20 seconds away. 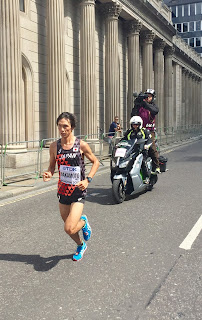 From there Nakamoto settled into the kind of running that has made him the best championships marathoner of his generation, relentlessly pushing ahead and running down one runner after another. From 12th he advanced all the way 9th, with this year's London Marathon winner Daniel Wanjiru (Kenya) coming back into sight in the coveted 8th place. 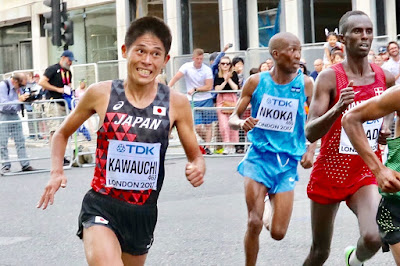 But behind him Kawauchi rallied, latching onto a group around 20th place as he recovered from the fall and then going back on the offensive on the last lap. From 20th to 17th, to 15th, to 12th. Rounding the bend just before 40 km he was 15 seconds behind Nakamoto, and by 41 km it was down to 5 seconds. With 1 km to go he caught Nakamoto, who responded and ran side-by-side with him. But on the final uphill Kawauchi threw in an all-out sprint that broke his longtime rival, opening more than 20 seconds on Nakamoto over the last kilometer. 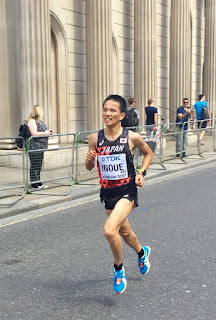 Wanjiru looked in range in the home straight onto Tower Bridge, but there just wasn't enough time or ground left to catch him. With the fastest closing split after 40 km in the entire field Kawauchi took 9th in 2:12:19 just 3 seconds out of the top eight and from taking the defending London champ down. Nakamoto was 10th in 2:12:41, both of them among the ten fastest times ever by Japanese men at the World Champs. Inoue ended far back in 26th in 2:16:54.

For Kawauchi, in his final Japanese National Team appearance it was his best-ever performance in a world-level championships, and one with the grittiest, most Kawauchiesque finish you could have asked for. At home he'll get criticism for not making top eight, but without the fall there's no telling how much further he might have gone. For Nakamoto it was a race that reaffirmed everything good about him. Three World Championships and an Olympics and never outside the top ten. For Inoue, one of the big hopefuls for the next generation of Japanese marathoners after his 2:08:22 breakthrough in Tokyo this year, it was a disappointment, but one that you can only hope leads to better things. 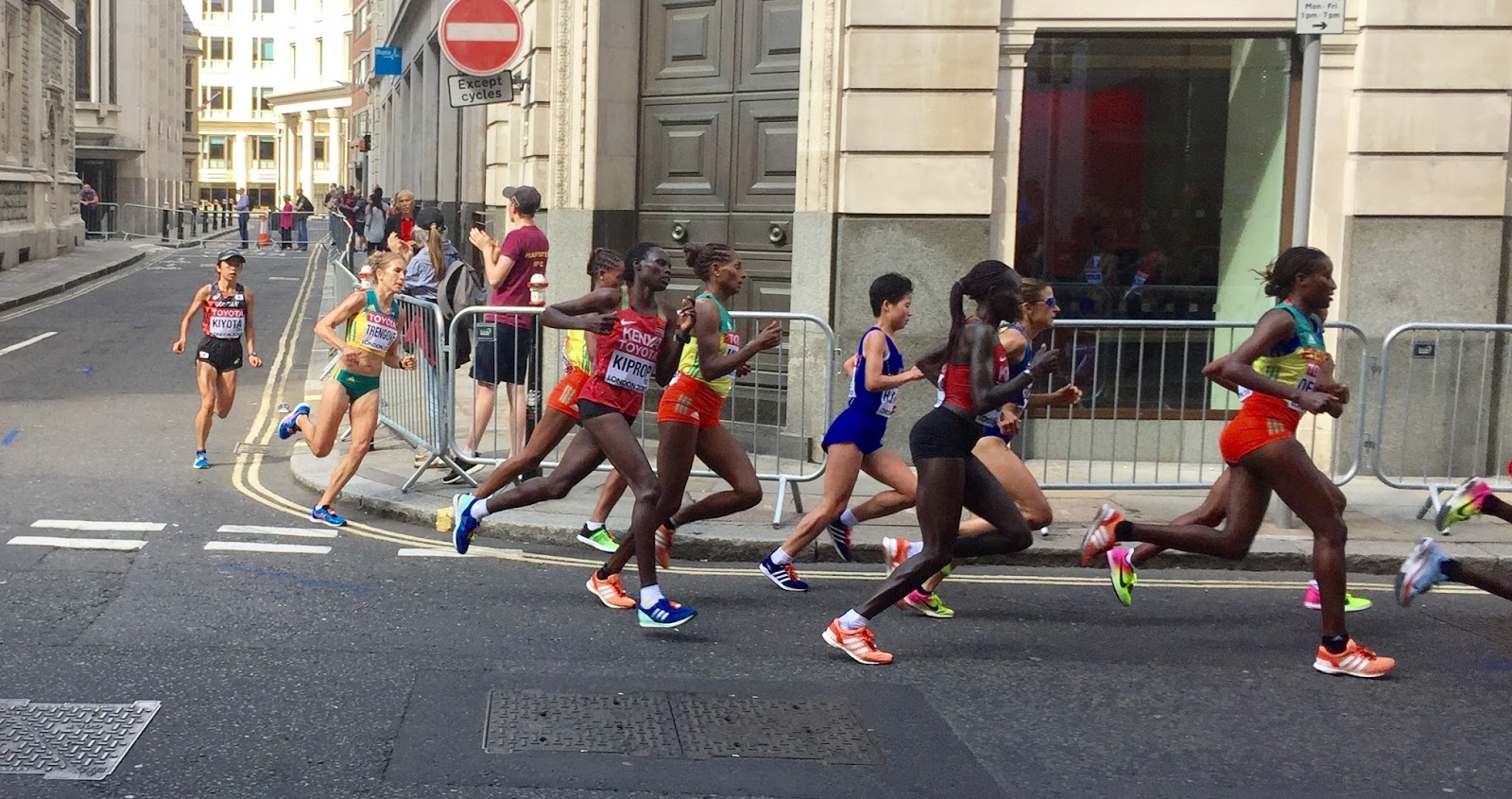 The Japanese women, almost universally more successful than the men at the World Championships level, turned in the weakest team performance of modern times. Medal contender Yuka Ando and the highly experienced Risa Shigetomo were never in the action. Ando's teammate Mao Kiyota was at the front of the pack in the early going, shifting to its rear after Aly Dixon (Great Britain) broke away from the group. For the middle half of the race Kiyota stayed there, repeatedly dropping out of contact and looking like she was done but coming back each time. Not until the real move came midway through the final lap was she dropped for good, losing almost three and a half minutes on winner Rose Chelimo (Bahrain) over the last 5 km. 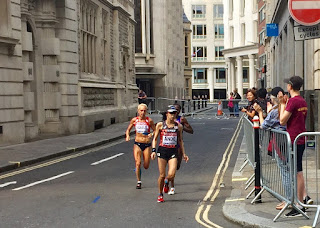 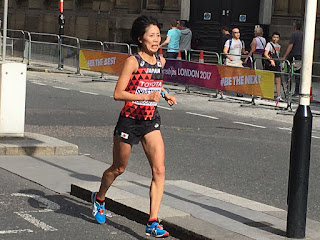 Despite Kawauchi's narrow miss on 8th place, the Japanese women's weak overall performance meant that this was the first World Championships in over 20 year in which not a single Japanese athlete male or female made the top eight in the marathon. With Kawauchi and Nakamoto now in their 30's and high-potential young athletes Ando and Inoue struggling to repeat their early successes it's reason for concern about Japan's situation relative to Tokyo 2020, especially in combination with the absence of any Japanese men in the 5000 m and 10000 m in London. But despite the bleaker larger picture there's at the least the positive of Japan's longtime two best men both wrapping up their World Championships careers doing exactly what they each do best. 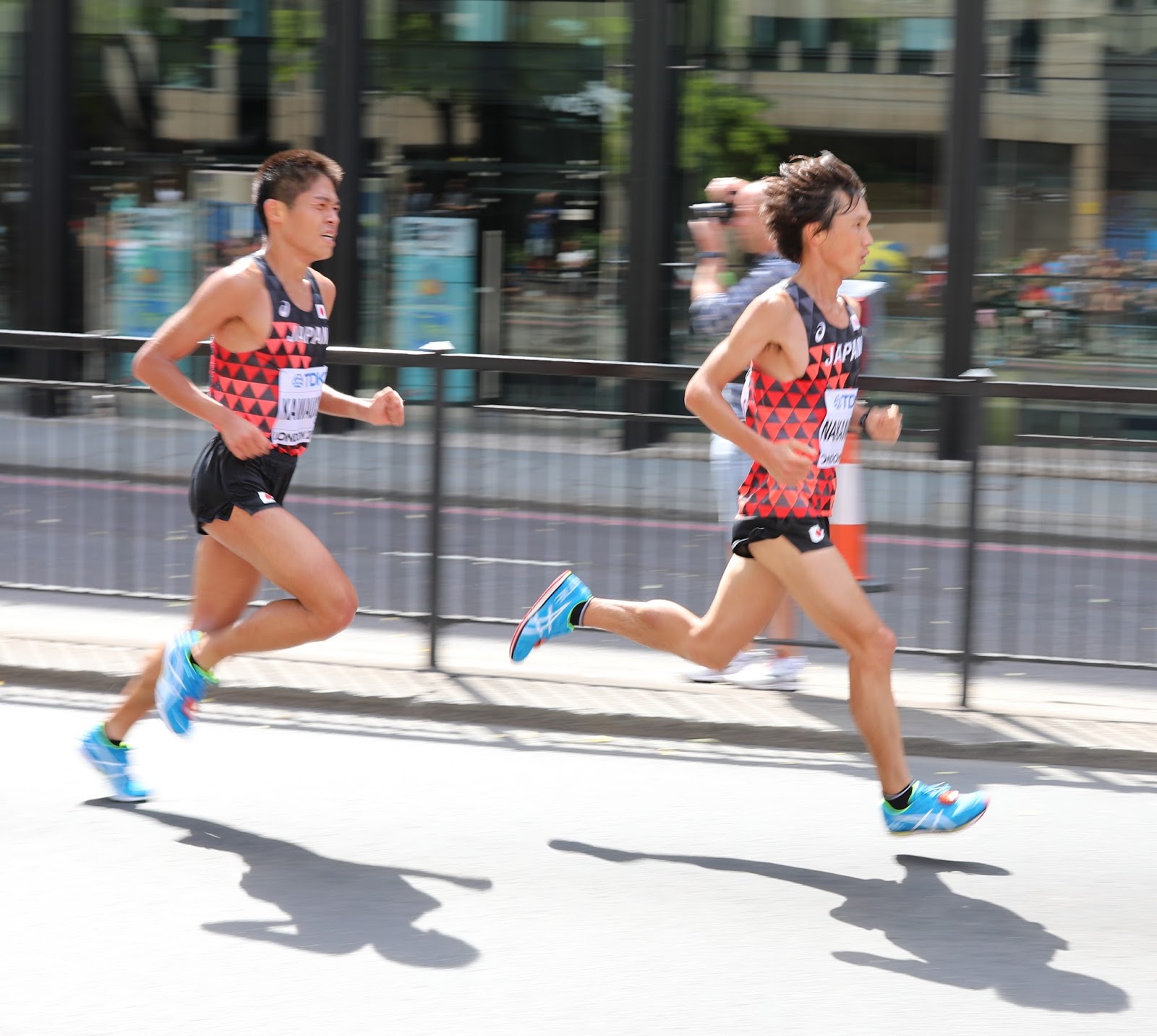 yuzaa said…
Nakamoto and Kawauchi ran really well. They seem to have mastered preparation for overseas races. It might be a good idea for them to pass on their knowledge to some of the other athletes.

The women were not so good. Their performances - excluding Fukushi's bronze medal - have been getting worse at major competitions over the last ten years. I do not know what is wrong with them, but I think they need to start doing at least one race overseas every year.

I will cut Ando and Kiyota some slack, Ando in particular because it is only her second marathon, but Shigetomo was poor. I am sure she is disappointed, but something does not seem right with her preparation for overseas races.
August 8, 2017 at 1:38 PM

Bradley said…
What shoes are Kawauchi and Nakamoto wearing above? They do not look like anything one can purchase in the US. Thanks.
January 12, 2018 at 5:25 AM

Brett Larner said…
ASICS Sortie Japan. I'm not sure of the exact model number but something within that series. Check the Rolows twitter feed for more.
January 12, 2018 at 1:57 PM

October 09, 2021
Nao Kazami  (Aisan Kogyo), the undisputed world record holder in the men's 100 km, took another title Saturday in Tokyo with a win at the Shibamata 100 km . Running two laps of a 25 km out-and-back course along the Edo River in high humidity but moderate temperatures, Kazami had company from Hiroki Takashima  (GASC) and the debuting Junpei Yamaguchi  (Eldoreso) through 60 km, all three passing halfway in 3:17 flat and keeping the pace steady for the next 10 km.  Takashima was the first to fall off just after 60 km, and a surge from Kazami just before 65 km was enough to put Yamaguchi away. Kazami covered the 5 km from 65 to 70 km in 18:34, about a minute faster than his splits up to that point, and while he slowed incrementally the rest of the away he still had it in him to drop a negative split of over two minutes to win in 6:31:47.  柴又100K、JP2位でゴールしました！皆様、応援ありがとうございました🙌 pic.twitter.com/Z9JVVL1LQX — ELDORESO (@eldoreso) October 9, 2021 After getting dropped Yamaguchi, pictured
Post a Comment
Read more