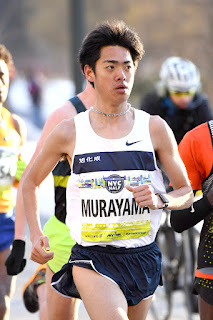 Kenta Murayama (Team Asahi Kasei) ran the fastest time ever by a Japanese man on U.S. soil to take 5th in the United Airlines NYC Half Marathon in 1:00:57.  The first alumnus of the Japan Running News-New York Road Runners program to bring top collegiate talent from November's Ageo City Half Marathon to New York to return as a pro, Murayama asserted himself from the gun, ensuring the race got off to an honest start as he led the first 5 km in 14:24.  "The last time I was here the first 5 km was close to 15:00," he told JRN post-race.  "If it starts too slow it affects how you feel later in the race and keeps too many people up front.  I wanted to run comfortably.  I figured that 14:20 would be about right.  It didn't feel too fast, but when I looked around almost nobody was left."

Remaining up front after just the first 2 km were the eventual top six including Murayama, 2017 Marugame Half winner Callum Hawkins (Great Britain), Rio Olympics marathon silver medalist Feyisa Lilesa (Ethiopia), defending champ Stephen Sambu (Kenya), Teshome Mekonen (Ethiopia) and Chris Derrick (U.S.A.).  Hawkins challenged Murayama on the steep uphill just past 5 km, but Murayama, a veteran of the Hakone Ekiden's Fifth Stage, maintained his position.  Running the toughest 5 km of the course in 14:22 Murayama still led at 10 km, but as the pack exited Central Park onto the faster 2nd half Hawkins and Lilesa surged to the front.

Murayama and Derrick fell away, with Sambu trailing the top three and Mekonen struggling to hang on.  As the race rolled on it came down to a sprint finish with Lilesa getting away from Hawkins in characteristic Ethiopian style to win in 1:00:04.  Hawkins was next in 1:00:08, just off his winning time from Marugame last month.  Mekonen rounded out the podium 20 seconds later. Murayama closed hard after 20 km, bearing down on defending champ Sambu in the home straight but coming up just short, Sambu 4th in 1:00:55 and Murayama 5th in 1:00:57.  The seventh-fastest Japanese time ever, Murayama took 51 seconds off the fastest Japanese time on U.S. soil, and by breaking 1:01:00 he become just the second Japanese man ever to go sub-61 outside Japan and the second in history to run sub-61 twice in his career.

This year's two collegiate invitees from the Ageo City Half Marathon, Rintaro Takeda (Waseda Univ.) and Kenta Ueda (Yamanashi Gakuin Univ.), both struggled relative to their strong 1:01:59 and 1:02:01 top two performances in Ageo last November.  Takeda ran the early part of the race on sub-63 pace, but after exiting Central Park where the pace typically accelerates he slowed progressively, eventually finishing in 1:05:09.  Ueda, coached by his father Masahito Ueda, was in immediate trouble and limped in to a 1:06:13 finish with a possible stress fracture in his shin.  In the women's race, freshly named alternate for the London World Championships marathon squad after a 2:25:44 runner-up finish in Osaka in January, Misato Horie (Team Noritz) ran 1:12:44. Molly Huddle (U.S.A.) outkicked Emily Sisson (U.S.A.) for the win in 1:08:21 with Diane Nukuri (Burundi) just missing a PB in 1:09:13 for 3rd.