Hwang, Morishita and I, Then and Now


19-year-old me watched Young-cho Hwang and Koichi Morishita race up Montjuic at the 1992 Barcelona Olympics and said, "That's what I want to do." A year later I did my first marathon.

Today I ran up Montjuic with them over the same 4 km that changed my life 25 years ago.  They were my original inspiration in wanting to run marathons and Morishita in particular was the person who first sparked my interest in and respect for Japanese distance running. I'll always be grateful to them for what they showed me as a teenager and for sharing the day with me today. 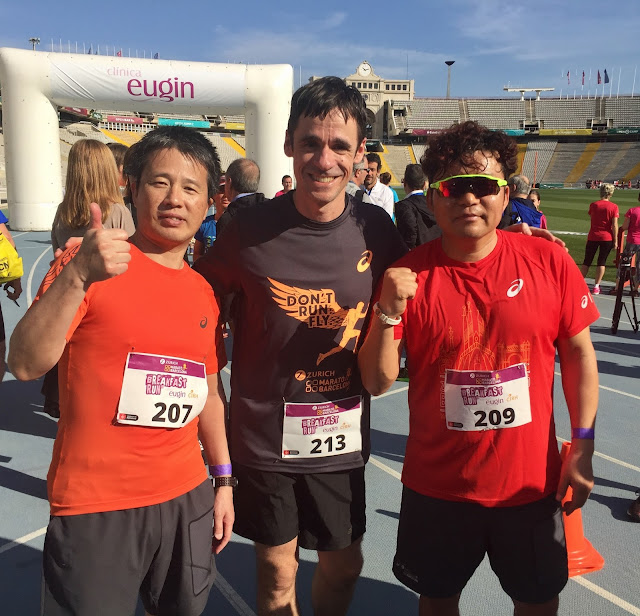 Postscript: At dinner that night Morishita decided he wanted to run the first 11.5 km loop of the Barcelona Marathon the next morning.  We ran it together with Jose Esteban Montiel, a Spanish Olympian who finished 32nd in '92 and was doing his last marathon.  Morishita set the pace, going through 10 km in 44:49 before surging for the last km and a half.  Montiel and I stayed together on sub-3:10 pace until 25 km before he slowed down, the two of us ultimately finishing 3 minutes apart.  '92 bronze medalist Stephan Freigang of Germany went out with the 2:45 pace group, finishing in 3:03:43.

Ferran said…
OMG! I was at BCN too pacing a friend for 30k. It should have been nice to meet you as a big fan of your blog that I'm.

I hope you spent a nice time in BCN.