Takeda Follows Osako as Fourth Man to Break 62 Minutes at Ageo City Half, Leading 197 Under 66

Waseda University fourth-year Rintaro Takeda became just the fourth man and third Japanese collegiate runner in the 29-year history of the Ageo City Half Marathon to break 62 minutes on the Ageo course, running a PB of over a minute to win in 1:01:59 in a tight sprint finish on the track.

Just about the last major university race before the January 2-3 Hakone Ekiden, Ageo serves to help coaches of the twenty Hakone-bound schools sort out their final rosters for Japan's biggest race.  With most schools fielding around thirty runners apiece this has made Ageo into the deepest half marathon in the world, and over the last five years an invitation for the top two finishers to run March's United Airlines NYC Half Marathon has taken the front end of the race to another level. 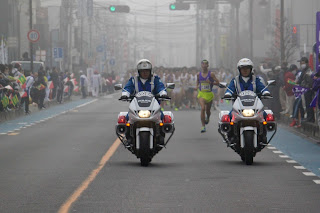 Despite predicted hot weather the day dawned with thick fog and temperatures under 10 degrees.  Running his first half marathon, 18-year-old Chuo Gakuin University first-year Takumi Yokokawa made the most of it, hauling off with a measurable lead in the first km and stretching it out from there.  Hitting 5 km around 14:25, well under pace for 1:01, his lead over the main pack was up to 20 seconds.  And what a pack, with runners from Waseda, Toyo University, Tokai University and elsewhere leading a mass that stretched back without breaks as far as the fog made it possible to see.

Yokokawa held on to his lead looking smooth and comfortable, but after 8 km it was clear that the front end of the pack was ready to bring him back. Picking up the pace a group of around 20 broke away in pursuit, and at 11 km they swallowed Yokokawa whole.  He held on until around 16 km when the next move came via Takumi Komatsu of Nittai University, a move that took the leading contenders down to a dozen or so. 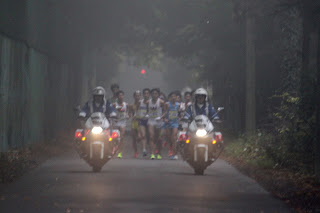 And from there it was a fast-paced pack run, the back end falling off one by one as the group worked together at 62-flat pace.  Nine runners, eight of them university men and one a corporate runner, were still together on the last main corner with just under a kilometer to go.  Komatsu made another move coming off the corner, but approaching the curve into the stadium Kenta Ueda, the son of Yamanashi Gakuin University head coach Masahito Ueda, went for it.  Takeda was right behind, with Komatsu and Toyo's debuting first-year Akira Aizawa a few steps back and Tokai first-year Shota Onizuka, likewise running the half for the first time, just behind them.  Ueda looked to have it, but in the same kind of finish seen the last three years in Ageo Takeda overtook him with less than 200 m to go to kick in for the win. 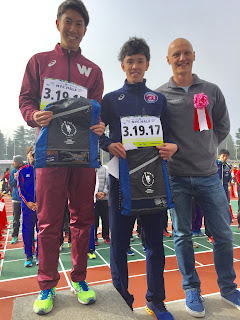 The list of PBs and incredible debuts went deep into the field.  The top fourteen broke 63 minutes, one of the better years in Ageo history.  66 broke 1:03, 124 going under 1:05 and 197 under 1:06, all new Ageo records.  With only nine men ever having broken 1:02:30 in Ageo's first 28 years the top ten this year all did it, 10th-placer Takaya Sato of Yamanashi Gakuin crossing the line with a PB of 1:02:28.  And even some world records for depth, with the fastest-ever 77th through 81st-place finishes in a half marathon.  All this without Hakone champ Aoyama Gakuin University or most teams' best runners, who will be lining up next weekend at either the Kanto or Hachioji 10000 m time trial meets.  Takeda and Ueda earned the New York invitations, the New York Road Runners' Sam Grotewold on-hand to present them with the invitations. Takeda follows 2014 Ageo winner Koki Takada as the second Waseda runner to make the NYC cut, Ueda the first Yamanashi Gakuin runner to do it.  The NYC invite includes the runners' coaches, meaning a potential father-son trip for the Uedas come March.

In the more immediate future, the massive wave of new half marathon bests reshapes the Hakone landscape a month and a half out.  With wins at the Izumo Ekiden and National Universtiy Ekiden behind it Aoyama Gakuin University, absent from Ageo, is the heavy favorite to win Hakone, its top ten half marathon average of 1:02:47 putting it far head of the field pre-Ageo.  But with Takeda's win, his teammates Kazuma Taira and Yohei Suzuki clearing 1:02:20, and other teammates further down through the top 50 also scoring solid debut and PBs Waseda has passed Aoyama Gakuin by.

Second at Nationals earlier this month and only losing midway through the anchor stage there, post-Ageo Waseda now has a top ten average of 1:02:42. Tokai, Yamanashi Gakuin and Komazawa University also zeroed in on a sub-63 average with their Ageo results.  With no school currently holding the kind of uphill specialist who has made Hakone's Fifth Stage the deciding factor for over a decade Hakone now looks like it could be close.  Not wide open, but not the kind of blowout it looked like it would be 24 hours ago.  Only three schools have ever pulled off the Izumo-Nationals-Hakone triple crown. Waseda was the last one to do it, and they may be the ones who stop Aoyama Gakuin from joining the club. 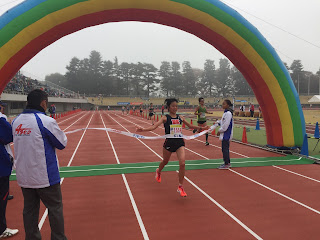 Ageo's women's field doesn't feature the same depth, but in most years one or two good university women will be there to take the top position.  After back-to-back national record wins the last two years from Hong Kong's Kit Ching Yiu, this year the title returned home as 18-year-old Asumi Kato of Keio University narrowly beat Taiwan's Chun Yu Tsao for the win in 1:16:55.  Tsao was part of a large group of elite-level Taiwanese men and women who raced Ageo this year, following national record-breaking runs there by Yiu and Singapore's Mok Ying Ren.  Post-race the Taiwanese contingent met marathoner Yuki Kawauchi (Saitama Pref. Gov't), who ran conservatively starting at the very back of the field after sustaining a calf injury a week earlier. 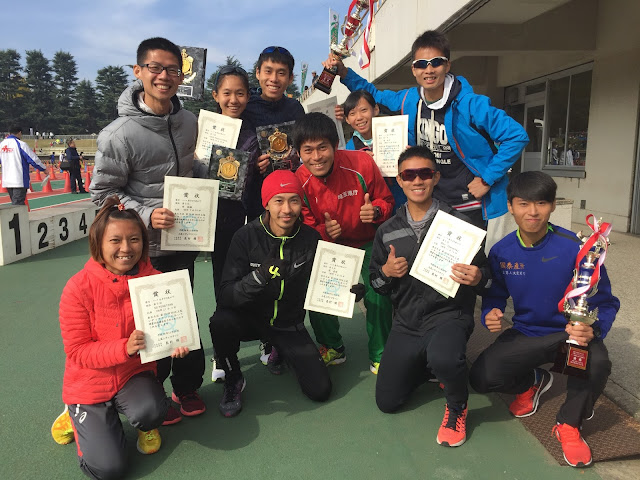 October 20, 2020
The qualifying race for the Nov. 22 National Corporate Women's Ekiden took place Oct. 18 in Munakata, Fukuoka, with Sekisui Kagaku winning the six-stage, 42.195 km race for the second year in a row in 2:17:03 and the top fourteen teams qualifying. Two-time national champion Daiichi Seimei's 21-year qualification streak was broken as it finished 15th. As the first national-level road race to take place since the start of the coronavirus crisis, teams were asked not to have their cheering squads along the course and other COVID countermeasures were put in place.
On the ekiden's 7.0 km opening stage, Kako Okada, an athlete with the Kyocera team, collapsed less than 100 m from the first exchange zone and was unable to continue. Okada went into full-body convulsions and on-site medical staff called an ambulance. Hearing the news from the First Stage supervisor, the race's chief referee quickly made the decision to officially stop Okada.
Two years ago another athlete suffered …
4 comments
Read more

October 25, 2020
Three-time defending Morinomiyako Ekiden champion Meijo University made it four in a row, leading Sunday's National University Women's Ekiden almost start to finish to break its own year-old course record by over a minute and a half.
Rival Ritsumeikan University's leading runner Rinka Hida was the only one to spoil Meijo's party, dropping Meijo's Yuna Wada to win the 6.6 km First Stage by 8 seconds. But on the next stage Yuma Yamamoto put Meijo out front, and with its next three runners all winning their stages, two in stage record time including an impressive 29:14 for the 9.2 km Fifth Stage by 10000 m national collegiate champ Rika Kaseda, its lead only grew. Anchor Tomomi Musembi Takamatsu was 2nd-fastest on her stage, but with a lead of nearly a kilometer she was never in danger of getting caught as she broke the tape in 2:02:57, a full 1:37 under the record for the 6-stage, 38.1 km course that it set last year. Road records might not be worth what they used to …
1 comment
Read more