translated and edited by Brett Larner
photo by Tsukasa Kawarai 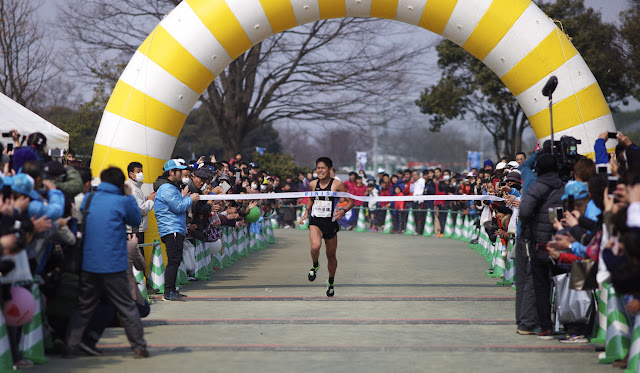 Fresh from being named to the London World Championships men's marathon team on Friday, Yuki Kawauchi (Saitama Pref. Gov't) ran the first race of his London buildup Sunday at the Kuki Half Marathon, winning by a massive margin in a course record 1:05:03.  The site of his unofficial half-marathon-in-a-suit world record in its first edition last year, the Kuki Half Marathon is Kawauchi's hometown race.  With a course change sending the race past his alma mater Washinomiya J.H.S. this year, Kawauchi ran wearing his junior high school-era uniform.  "It was a headwind the whole way," he laughed about his time, almost three minutes slower than his PB.  "Now isn't the time to push it. I feel good."

Having declared that the World Championships will be his last time competing on the Japanese national team, Kawauchi looked ahead to the main event five months distant.  "The fact that I'm going there means I intend to medal," he said with determination.  "As I was running today the people of my hometown were calling out, 'Congratulations on London!'  The support was greater than I could have imagined.  That means I have to do it right.  I have to try to live up to those expectations.  There's no room for believing my chances of medalling are zero."

In preparation, he announced that along with several half marathons and June's Okinoshima 50 km Ultramarathon he will run the Czech Republic's Prague Marathon in May, Sweden's Stockholm Marathon in June, and Australia's Gold Coast Marathon in July.  "In Prague I'll be aiming for a PB, and in Stockholm and Gold Coast sub-2:10," he said.  "When London's over I want to take a break for a while, so until then it's attack attack attack."  Facing his last world-level challenge, Kawauchi remains one-of-a-kind in his approach. Miracles can't happen without pushing yourself beyond your limits.