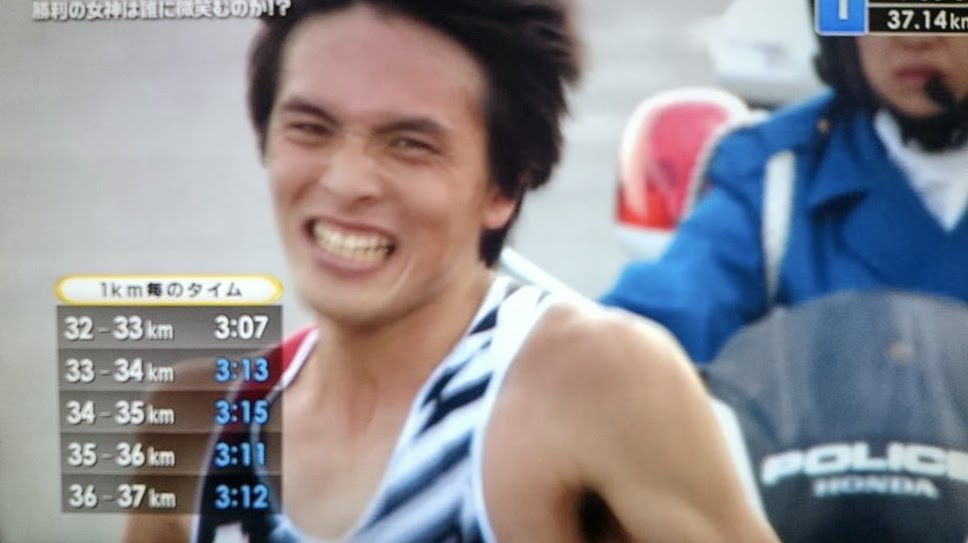 Record-breaking snowfall in eastern Japan all day Saturday meant the cancellation of virtually every Sunday race in the area, including the elite-level Chiba International Cross-Country Meet, and kept many Tokyo-region runners bound for races in the west at home. Of the races that did go off, in his marathon debut 2008 Hakone Ekiden Yosenkai 20 km winner Kazuki Tomaru (Team Toyota) was the star of the day's most important race, the 52nd running of the Nobeoka Nishi Nippon Marathon.

With impeccable pacing from former Waseda University standout Yuki Yagi (Team Asahi Kasei), who split 15:27, 15:26 and 15:26 for the first three 5 km segments, a large pack ran at around 2:10:30 pace, 45 seconds ahead of the event's course record.  The pace slowed slightly from 15 km to Yagi's departure at 25 km, but Tomaru quickly got to work with another 15:26 to get rid of the field.  Only Ryo Ishita (SDF Academy) went after him, but around 33 km Ishita was overtaken by Yagi's teammate Ryoichi Matsuo (Team Asahi Kasei), 50 seconds behind Tomaru at 35 km.

Feeling the burn of his marathon debut, Tomaru's pace dropped to 16:03 from 35 to 40 km as Matsuo turned it on in pursuit.  Coming within 28 seconds at 40 km it looked as though Matsuo might have a shot at stealing the race, but Tomaru rallied and equalled Matsuo's closing split of 6:58.  Tomaru's debut time of 2:11:43 was the second-best winning time in Nobeoka's history, and coming with strong solo frontrunning after 25 km it marks him as a name to watch in Japanese men's marathoning over the next few years. Matsuo clocked a PB 2:12:11, three seconds faster than last year's winning time run by Hiroaki Sano (Team Honda).  Ishita held on to 3rd, running a nine-minute PB of 2:13:52 that would have won quite a few years in recent Nobeoka history.  Considering that Sano went on to run 2:10:29 at the 2013 Chicago Marathon there's a good chance all three could follow suit.

Two other marathons in western Japan featured solid results.  At the first running of the mass-participation Kita-Kyushu Marathon, 2007 Nobeoka winner Shinji Tateishi (Team Yasukawa Denki) was first across the line in 2:17:42.  Yuka Yano (Canon AC Kyushu) was the women's winner, running close to sub-2:30 pace but coming up just shy in a nearly five-minute PB of 2:31:03.  On the neighboring island of Shikoku, local Matsuyama University senior Natsumi Fujiwara set a course record of 2:37:03 at the Ehime Marathon, which like Nobeoka was celebrating its 52nd running.  Masayuki Inoue (Team Ehime Ginko) was the men's winner in 2:19:39.

Across the straits in Hiroshima, the Manabu Kawagoe-coached Edion corporate team won the 28th edition of the six-stage, 21.0975 km Chugoku Women's Ekiden in 1:11:19.  Off to a slow start when lead runner Akane Mutazaki finished only 4th, Edion spent the entire race in pursuit of the East Hiroshima T&F Assoc. select team.  With 4.8675 km to make up 18 seconds it was up to Edion's star runner Yuko Watanabe to deliver on the anchor stage and she did, running down East Hiroshima's Yoshiko Matsumoto with room to spare.  Edion's winning time of 1:11:19 was well off the 1:08:08 course record set three years ago by Bukkyo University but still good enough to secure a margin of more than a minute over runner-up Tamagawa University.

Back on Kyushu at the 54th running of the Karatsu Road Race, last year's 8th-placer Kaoru Hirosue (Team Toyota Kyushu) outran sub-60 minute half marathoner Mekubo Mogusu (Kenya/Team Nissin Shokuhin), Moscow World Championships marathoner Yuki Kawauchi (Saitama Pref. Gov't) and others to win the men's 10 mile division in a PB 47:17.  Kawauchi took well over a minute off his 10-mile PB, 4th in 47:28.  Women's 10 km 2011 winner Fumiko Hashimoto (Team Shimamura) came out on top of a five-way sprint finish to win again in 33:23, while Eikichi Kazaoka (Tottori Johoku H.S.) led three under 30 minutes to win the high school boys' 10 km in 29:47.  Rie Uchida (Shiraishi H.S.) rounded out the day with a 16:58 win in the high school girls' 5 km by one second over teammate Miki Hirai.