While Tokyo's Ome 30 km fell victim to the major snowstorm that hit the north half of Japan on Friday, the Kumanichi 30 km near the southernmost tip of the southern island of Kyushu picked up another piece of history on Sunday. 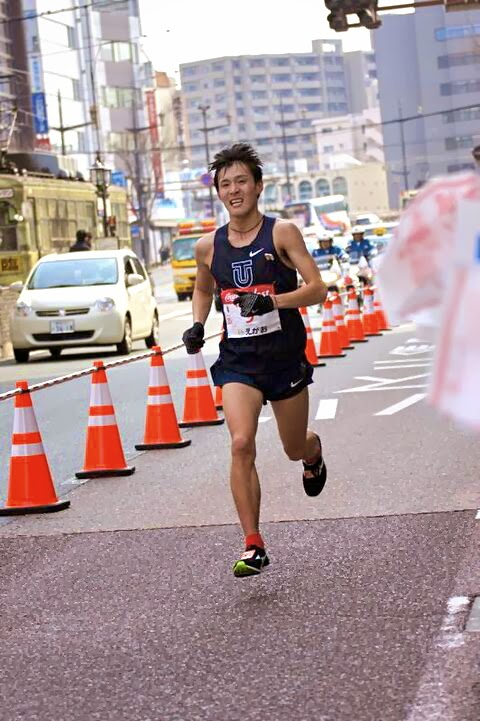 Nakamura took the race out very, very fast, going 14:34 through 5 km, well ahead of Patrick Makau's 1:27:38 world record 30 km split with the entire main pack of contenders in tow.  The pace continued almost unchanged, Nakamura leading the top six through 10 km in 29:13 and the top five through 15 km in 43:55 before slowing to 20 km in 58:52.  It's worth pausing to note that although it was the 30 km debut of everyone involved and that almost all were university students, the lead quintet's splits through 20 km were almost identical to those at the simultaneous National Corporate Half Marathon Championships, where apart from winner Daniel Gitau (Kenya/Team Fujitsu) the lead group's splits went 14:34 - 29:13 - 43:52 - 58:13.  Although Hattori has never run a half marathon, his and the rest of the lead group's 58:52 split at 20 km would have meant a half marathon split of around 1:02:06, a time that would also have been a half marathon PB for Nakamura, Honda and Takaku.

After the slower pace between 15 and 20 km, Toyo second-year Hattori went to the front, only Nakamura going with him as Maina hung back with Honda and Takaku lost touch. Hitting 25 km in 1:13:54 Hattori surged and broke Nakamura, pulling away to run the last 5 km alone all the way to the finish.  Crossing the line in 1:28:52, Hattori took more than a minute off his teammate Shitara's university national record and almost 40 seconds off Kawauchi's course record, tying marathon legend Toshihiko Seko's PB to come in at all-time #3 for 30 km in the Japanese record books.  Shitara followed up his collegiate national record last year with a 27:51.54 best for 10000 m.  If Hattori broke Shitara's time by the same margin he did today it would mean 27:30, a Japanese national record.  That may not be realistic, but an all-time #3 to match his 30 km mark would mean under 27:38.25, and considering that, having just turned 20, over 10000 m he's already ahead of where Suguru Osako (Waseda Univ.), the current #4 man in 27:38.31 at age 21, was at the same age, it seems within the realm of the possible.  Shitara's 1:01:45 half marathon best should also be his whenever he decides to take it.  Either way it looks at this point like Hattori's in for a hell of a year.

Further back from Hattori, Maina regrouped to drop Honda and go after the fading Nakamura, catching him in the last two kilometers to take 2nd in 1:29:55.  Nakamura just missed cracking 90 minutes, 3rd across the line in 1:30:11 with Honda and Takaku close behind.  Tokyo 2020 is still a long way away, but with Hattori just 20 years old it looks pretty clear that Japan has definite ideas about what it needs to do to bring up his generation to win marathon medals on home soil. 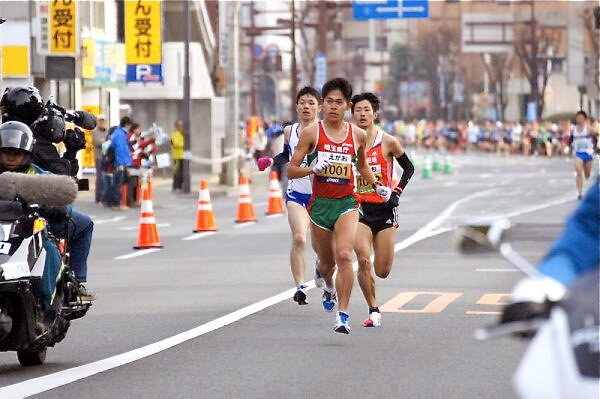 Race organizers hoped for Kawauchi to return this year and be part of the action, but he requested to run the 3rd edition of the event's mass-participation full marathon division instead to open his 2014 marathon season and tune up for the Mar. 2 Lake Biwa Mainichi Marathon.  With a course record of just 2:19:30 set last year by his fellow civil servant runner Shota Jige (Kumamoto Pref. Gov't) and no other elite athletes in the race there was no doubt that Kawauchi would win with a decent course record time that would last for quite a while.  But while most expected that to mean mid-low teens, caught in the flow of a smooth race in good conditions he finished in 2:10:14, more than nine minutes ahead of the old course record and twelve minutes ahead of 2nd place.  "That was a little better time than planned," he told JRN post-race, indicating that he had intended to run 2:12 to 2:13.  "I'm heading straight to the hot springs to deal with the fatigue and regroup for Lake Biwa."  Following Lake Biwa Kawauchi will run May's Hamburg Marathon against Haile Gebreselassie (Ethiopia) and Martin Lel (Kenya).