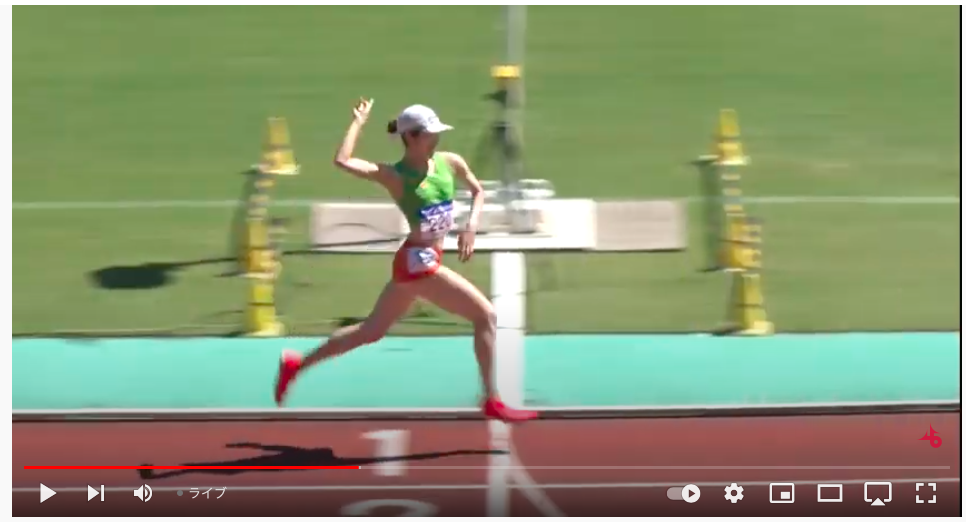 The 90th National University Track and Field Championships wrapped up Sunday under sunny skies and late-summer temps in Kumagaya, Saitama.
Already the U20 and meet record holder in the women's 3000 m steeplechase, Reimi Yoshimura (Daito Bunka Univ.) broke both the meet and collegiate national records with a solo 9:41.43 for the win. Yoshimura just edged Yuno Yamanaka (Ehime Ginko), who ran 9:41.84 in June, out of the 2nd-fastest Japanese ever position, and with two women now within 8 seconds of Minori Hayakari's 9:33.93 it feels like there's a legit shot at a new national record on the horizon.
The men's 3000 mSC was uneventful, with national record holder Ryuji Miura (Juntendo Univ.) turning in a perfunctory 8:32.47 for the win, 4 seconds off the meet record he set last year during his first collegiate season.
Another collegiate record came in the men's triple jump courtesy of another U20 national record holder. Riku Ito (Kinki Univ.) jumped 17.00 m (+1.3) on his 4th attempt, breaking the collegiate record by 2 cm and the 1985 vintage meet record by 8 cm to move into all-time Japanese #3. The national record, set in 1986, is now just another 15 cm away for Ito.
The decade-old women's 100 m hurdles collegiate record was out of reach, but Manaka Shibata (Kantaiheiyo Univ.) took the win in a meet record 13.23 (+1.8) after having set the previous record of 13.25 (+1.6) in the semifinals. Shibata looked the most relaxed and causal during the pre-race introductions, just smiling and waving when her name was called like it was any other race.
Men's 110 mH national record holder Shunsuke Izumiya (Juntendo Univ.) bettered his own day-old meet record to win the final in 13.29 (+1.4). Taiga Yokochi (Hosei Univ.) was a surprise in 2nd, just 0.03 off Izumiya's previous record at 13.47 and bettering Olympic alternate Rachid Muratake (Juntendo Univ.), 3rd in 13.48.
Star 1st-year Seira Fuwa (Takushoku Univ.) did most of the heavy lifting in the women's 5000 m, surviving a mid-race surge from rival Narumi Kobayashi (Meijo Univ.) to retake the lead. In the last 200 m she was outkicked by Kenyan 1st-year Sheila Cherotich (Meiji Kokusai Iryo Univ.), but post-race Cherotich was disqualified for stepping inside the rail at the start. Fuwa was elevated to 1st in 15:50.32, with Kobayashi 2nd in 15:54.14 and Risa Yamazaki (Nittai Univ.) 3rd in 15:59.85.
With the four best Africans in the field all a DNS and Waseda University star Yuhi Nakaya a mid-race DNF, Japanese runners took the top 3 places in the men's 5000 m. Kotaro Kondo (Aoyama Gakuin Univ.) got the national title with a kick on the last bend to run down leader Kotaro Shinohara (Komazawa Univ.) 13:46.98 to 13:48.57. Ken Tansho (Tokyo Kokusai Univ.) was 3rd in 13:48.78.
In other finals:
© 2021 Brett Larner, all rights reserved