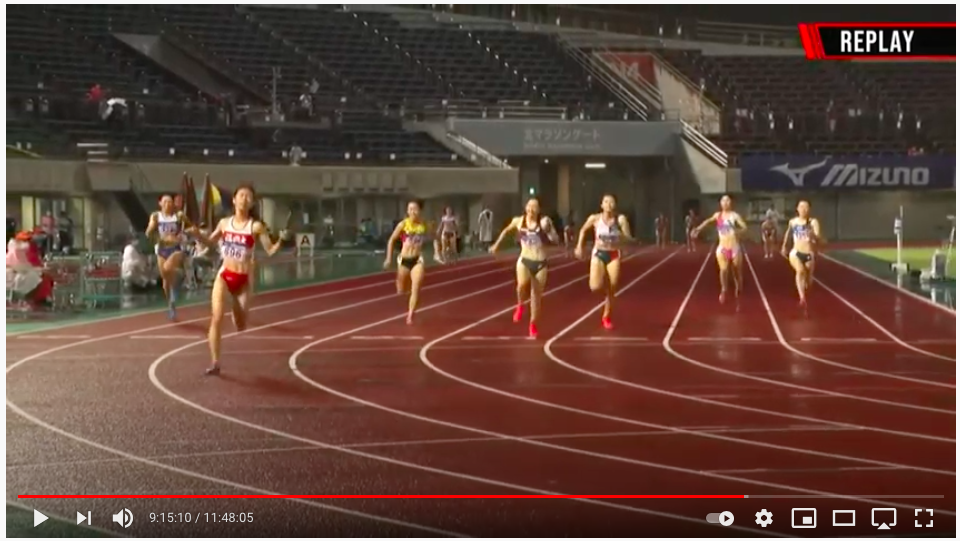 On-and-off rain and wind from the typhoon passing to the south meant unstable conditions on the second day of the 90th National University Track and Field Championships in Kumagaya, Saitama, some people lucking out and others out of luck.
With Tokyo Olympian Mei Kodama running 2nd, the Fukuoka University women broke the 4x100 m relay meet record of 44.59 set three years ago by Nittai University. Fukuoka ran 44.51 for the win, not only clearing the old meet record but also going under the collegiate record of 44.56. Runner-up Ritsumeikan University was almost a second behind in 45.49. Kodama also won the 100 m final in 11.51 (+0.5), 0.16 off the individual meet record she set last year.
In his first-round heat NR holder and Olympic team member Shunsuke Izumiya (Juntendo Univ.) crushed the 110 m hurdles meet record of 13.67 that had stood since 2001, clocking 13.44 (+0.1). His teammate and Olympic alternate Rachid Muratake (Juntendo Univ.) did the same in his heat, going under the old record in 13.59 (+0.5) to win his heat. Taiga Yokochi (Hosei Univ.) was just off the old record, winning his heat in 13.69 (-1.0) to head to the semis ranked 3rd. No one else was under 13.84.
Other winners on the second day of competition:
The National University Track and Field Championships wrap up Sunday. Live streaming can be had here.
© 2021 Brett Larner, all rights reserved