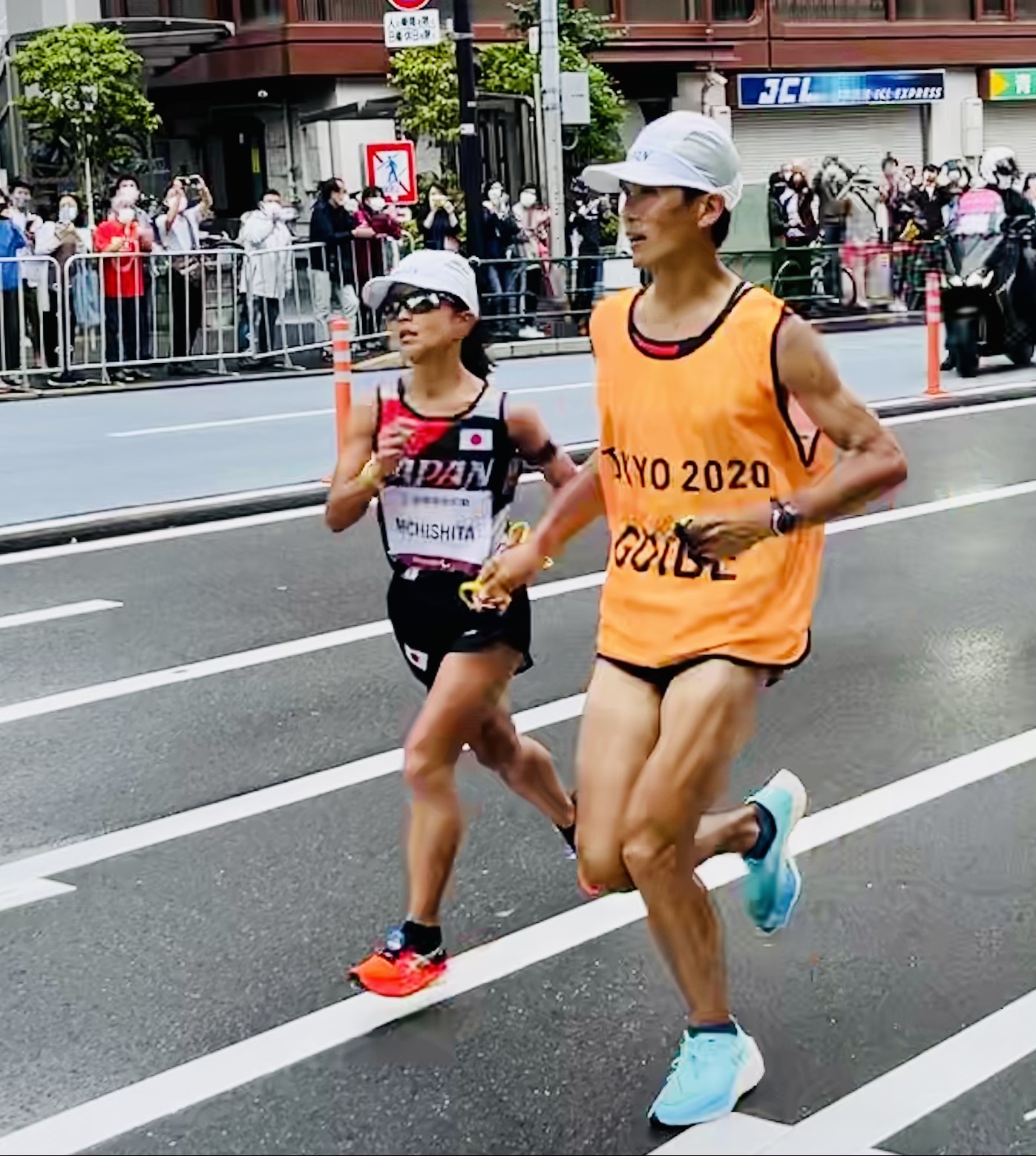 After coming up empty-handed last month in the Sapporo Olympic marathons, Japan scored three marathon medals on the streets of Tokyo proper at today's final day of the Tokyo Paralympic Games. The T54 men's wheelchair marathon was the first race off the line, followed ten minutes later by the T54 women's wheelchair marathon and another ten minutes later by the men's and women's T12/T46 marathons.
As cold rain started to pour down just as the race began, Swiss favorite Marcel Hug went head-to-heat with surprise challenger Yong Zhang of China in the T54 men's race. The pair steadily built a lead over the rest of the field until Hug, showing frustration at Zhang's refusal to lead, broke away on the series of hills just after 40 km to take gold in 1:24:02 to Zhang's 1:24:22. American Daniel Romanchuk took the top spot in the chase pack, beating Canada's Brent Lakatos, who had trouble on a corner and lost ground early in the race, by 13 seconds for bronze in 1:29:05. Japan's Tomoki Suzuki was 7th in 1:30:45 to finish right around the same position as the top Japanese athletes in the Olympic marathons, Mao Ichiyama and Suguru Osako.
After competing in the triathlon earlier in the Tokyo Paralympics, Wakako Tsuchida was part of a chase quintet that ran down breakaway leader Susannah Scaroni on the approach to the first major climb at 40 km. But she didn't have the gear to stay with the medalists in the final 2 km. Australian Madison de Rozario won a stellar sprint finish for gold in 1:38:11. with silver and bronze medalists Manuela Schar of Switzerland and Nikita den Boer of the Netherlands both finishing within 5 seconds of her and Tsuchida another 16 seconds back. Japan's Tsubasa Kina was 7th in 1:42:33 in her Paralympic debut. Vision-impaired division men's marathon winner El Amin Chentouf of Morocco looks back on a corner to check on the chase pack mid-race. 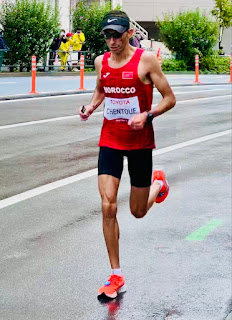 In the T12 visually-impaired men's marathon, Moroccan El Amin Chentouf, a medalist at the 2016 Rio de Janeiro Paralympics, broke away after the downhill first 5 km, initially accompanied by compatriots Hicham Hanyn and Abdelhadi El Harti. From there he steadily built a lead over the rest of the race, taking gold in a Paralympic Games record 2:21:43. 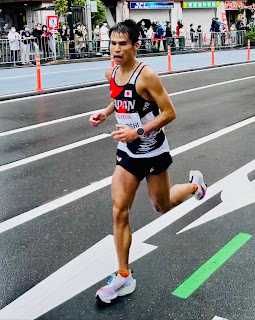 World record holder Jaryd Clifford ran more conservatively at the front of the chase pack, inching away from Tunisia's Hatem Nasrallah around 30 km to take silver in 2:26:09. Japan's Tadashi Horikoshi came up fast from further back to pass Nasrallah just before the 40 km climb and take bronze in 2:28:01. Teammates Yutaka Kumagai and Shinya Wada were 7th in 2:31:32 and 9th in 2:33:05, Wada's time a T11 class Paralympic record.
Post-race Horikoshi said, "I knew the course started with a downhill and ended up with an uphill, so I ran with that in mind and targeted a medal. A lot of things have happened since the Tokyo Paralympics were announced eight years ago, but a lot of people helped me along the way. I'm really glad I didn't give up and got this bronze medal to show them all." 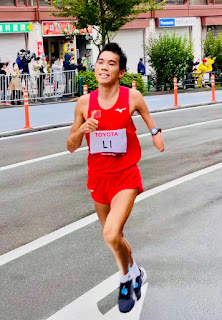 In the T46 men's marathon China's Chaoyuan Li soloed gold in 2:25:50, another Paralympic record, to finish 2nd overall behind Chentouf.  Li had company in the first half from Japan's Tsutomu Nagata and Australian Michael Roeger, but after going through halfway as a trio Li picked up his pace by about 5 seconds a kilometer through 25 km, then another 5 sec per km through 30 km. Neither rival could follow. 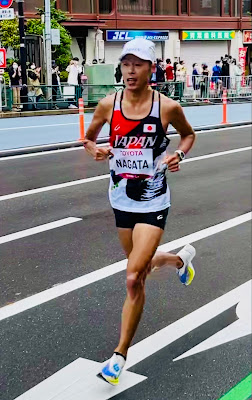 Ultramarathoner Nagata, who trained for the Tokyo Paralympics with the national champion Asahi Kasei corporate ekiden team, started to fade after 25 km, and Brazil's Alex Douglas Pires da Silva was quick to run him down. Da Silva passed Nagata near the Imperial Palace turnaround at 32 km and closed on Li to take silver in 2:27:00, a Paralympic record for his class. Nagata hung on to bronze in 2:29:33, adding to Horikoshi's take a minute and a half earlier.
"It was scary," he said afterward. "Partway through the race I had a vision of myself apologizing to everyone, to everyone watching on TV, to everyone who has supported me. I don't know what I would have done if it had come true. I'm a bit disappointed with my result, but I'm glad I can at least repay everyone's support with a bronze medal." 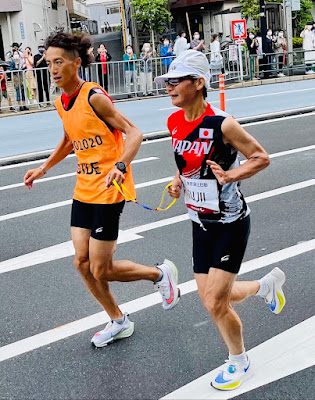 But the biggest fireworks came in the T12 women's marathon. World record holder Misato Michishita, silver medalist in Rio five years ago, sat in a lead pack of four in the early going, picking it up when Russian Elena Pautova opened a slight lead but waiting until they hit 30 km to make a serious move. Pautova was completely unable to answer, and Michishita and her guide ran unchallenged the rest of the way to claim marathon gold for Japan in 3:00:50. Pautova faded to 3:04:16 but was safe in silver, bronze medalist Louzanne Coetzee a distant 3rd in 3:11:13. 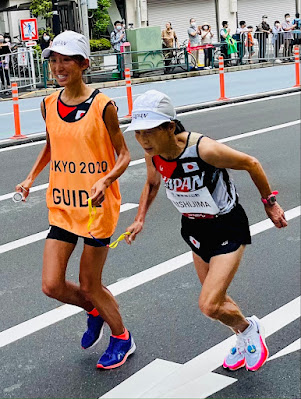 56-year-old Yumiko Fujii moved up mid-race from a very conservative start to take 5th in 3:20:45. Running with second-half guidance from 2:26 marathoner Haruka Yamaguchi after spending the first half alongside Fujii, 66-year-old Mihoko Nishijima opened a lead of 49 seconds on Fujii by 30 km before losing ground again. Struggling mightily and stopping repeatedly in the final 5 km, Nishijima hung on to 8th place, just making it under three and a half hours in 3:29:12.
And with that, the Tokyo Paralympics were over. Despite the rain, the early start, the serious state of the pandemic, and organizers' efforts to discourage people from spectating on the course, crowds lined the route everywhere we went. And we didn't even go to any of the most popular spots like Jinbocho or Nihonbashi where you could see runners three times without having to move. Few cheered out loud, most just clapping, an acknowledgement of at least one of the government's requests for how to act during the pandemic.
The MGC Race Olympic trials and the promise it had for the kind of crowds that would turn out seem like a distant memory now. But the crowds today still had to have some of the biggest in Paralympic history, if not the biggest. Can you imagine what they would have been like without the pandemic? Can you imagine what they would have been like if the Olympic marathons had been in Tokyo? If the Olympic marathons had been in Tokyo without the pandemic?
Once the comedown starts to hit tomorrow it won't be long before this will all seem like a distant memory too, but at least for a few hours the average residents of Tokyo got to share a sliver of the magic with the best in the world and a few of their own. Long live that memory.
text and photos © 2021 Brett Larner, all rights reserved

Kyle S said…
Thank you Brett for all of the updates about Japanese athletics at the Olympics and Paralympics this past month. Seeing Horikoshi and Nagata cross the finish within minutes of each other to win their respective bronze medals was a great moment, and seeing Michishita coming into the stadium for her golden finish was truly special. Given the crowds that did show up, I can only imagine what the cheering would have been like for them without the pandemic.
September 6, 2021 at 1:19 AM