The Ekiden and the Marathon - Ranking the Corporate Leagues

With the Lake Biwa Mainichi Marathon and Nagoya Women's Marathon earlier this month Japan's domestic marathon season came to an early close, marking the end of the first season of qualifying for Japan's new 2020 Olympic Trials event, the MGC Race. As of these two races thirteen men and six women have scored qualifying spots in the MGC Race, with an additional fourteen men and four women within close range of getting in through the wildcard option of a two-race average under 2:11:00 or 2:28:00. 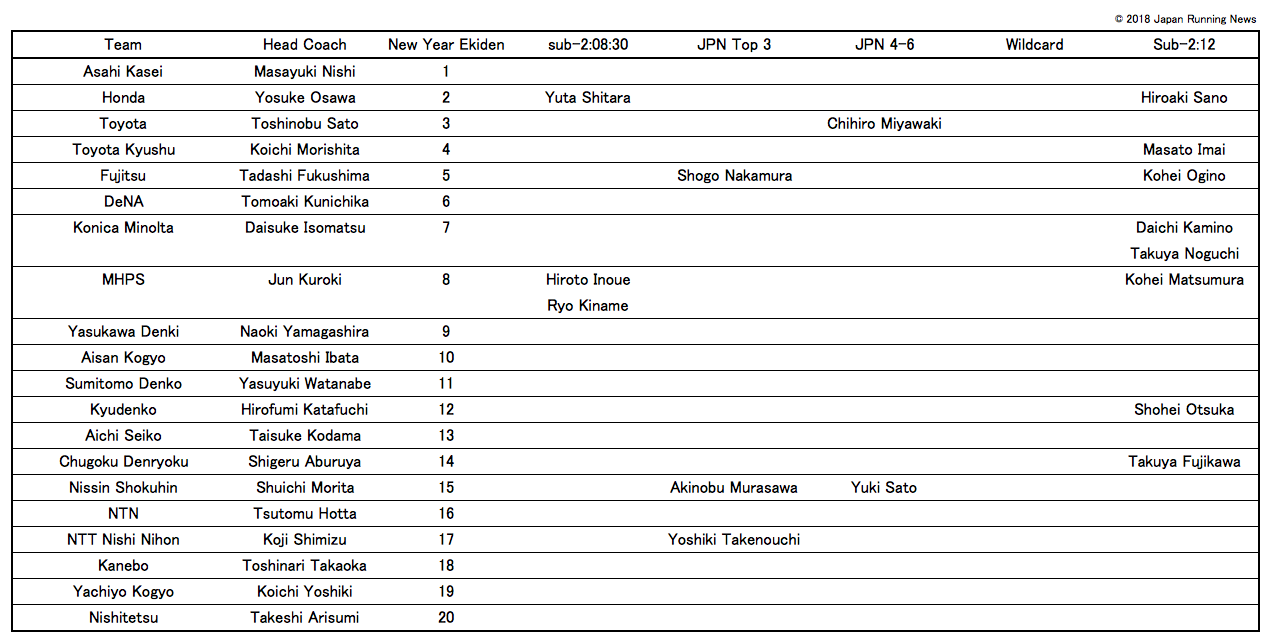 The big winners so far on the men's side are the MHPS, Nissin Shokuhin and Honda teams. MHPS leads the way with two men under the 2:08:30 qualifying standard and a third under 2:12 to put himself in realistic range of the two-race sub-2:11:00 average. Nissin Shokuhin qualified two men, one with a win at the Hokkaido Marathon and the other inside the top six Japanese and under 2:09 in Tokyo. Honda had one man under 2:08:30 to qualify and a second under 2:12 to land in sight of the wildcard entry. While Nissin Shokuhin is traditionally one of the heavy hitters on the ekiden circuit, both MHPS and Honda are relatively innovative. MHPS brands itself as a marathon team instead of an ekiden or track and field team like virtually every other team. Assistant coach Satoshi Ogawa does most of the actual work with athletes at Honda and gave MGC Race qualifier Yuta Shitara relative free rein in his training for his national record-breaking run at the Tokyo Marathon.

At the other end of the spectrum, the biggest failure in the first season of qualifying was two-time New Year Ekiden national champ and old-school fixture Asahi Kasei. It's not always easy to tell who's really in charge; at some teams the person listed as head coach is actually overseeing athletes' training, at others like Honda it's more the assistant coaches, and at others like Asahi Kasei there is an old-time overlord pulling the strings. Asahi Kasei head coach Masayuki Nishi, 22nd at the 1987 World Championships in 2:20:51, is under the thumb of Takeshi Soh and all the weight he and his twin brother Shigeru carry, but despite having a two-time national champion ekiden team with three sub-2:10 marathoners and two sub-61 half marathoners on its roster at their disposal Soh and Nishi's orthodox approach was unable to produce even a single man under 2:12 in the first season of qualifying. Likewise, New Year Ekiden 6th-placer DeNA, coached by 2:07 marathoner Tomoaki Kunichika but overseen by old-time great and current JAAF director of development ahead of Tokyo 2020 Toshihiko Seko, didn't even come close to qualifying a marathoner.

As with the men, the national champion ekiden team fronted by an old-time big name failed to put even a single runner in sight of the brass ring. The biggest success was traditional power Tenmaya, qualifying one woman under 2:24:00 and landing a second within short range of wildcard qualifying. Balancing that, the innovative non-corporate league Suzuki Hamamatsu AC team also qualified one woman and had a second in range of the wildcard.

Another innovative young team, Japan Post qualified a woman under 2:24:00 in its first time out the gate in the marathon. Meanwhile, national champion Universal Entertainment, headed by Yoshio Koide, coach of Athens Olympics gold medalist and former world record holder Naoko Takahashi, produced no significant results in the marathon. Daiichi Seimei, coached by 1991 World Championships silver medalist and current JAAF director of women's marathoning Sachiko Yamashita, also came up a blank, hurt in part by the absence of star Tomomi Tanaka with injury and the defection of #2 woman Hanae Tanaka to the Shiseido corporate team.

For both men and women, the predominant chunk of qualifiers and people in range of wildcard qualification came from teams that finished in the top third of the field in the national championship ekidens, with only the very top and most traditional ekiden teams failing to translate that potential into equivalent marathon success. With more innovative programs having a larger proportion of success the question now is whether the old boys at teams like Asahi Kasei and Universal Entertainment can turn things around over the second year of Olympic trials qualification. The next chance for Japanese athletes to definitively secure places at the MGC Race will be this summer's Jakarta Asian Games. Others will have a chance at wildcard qualification racing overseas in the spring season.