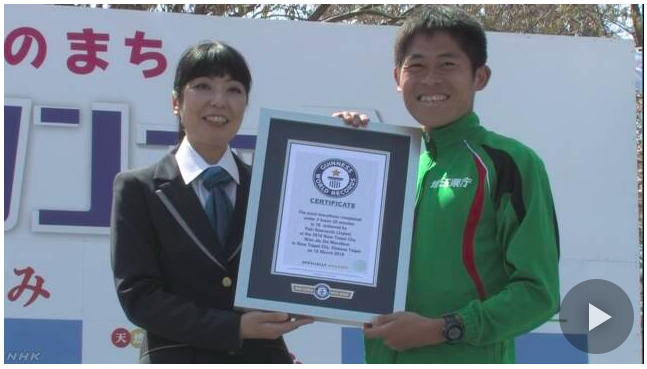 Known as the Civil Servant Runner, Saitama Prefectural Government employee Yuki Kawauchi's career record of 78 sub-2:20 marathons was officially recognized as the Guinness World Record at a ceremony in his hometown of Kuki, Saitama on Mar. 25.  Raised in Kuki, Kawauchi began working for the Saitama Prefectural Government after graduating from university. Running while working full-time as a civil servant, he has qualified for the 2020 Tokyo Olympic trial race. 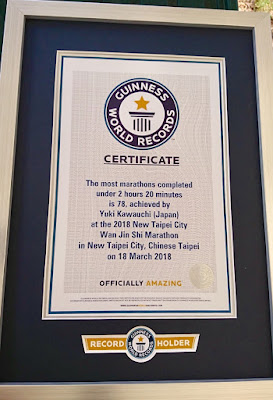 Earlier this month on the 18th Kawauchi ran Taiwan's Wan Jin Shi Marathon, winning in 2:14:12. His 78th time running faster than 2 hours and 20 minutes, his achievement was certified as the official Guinness World Record. He actually broke the previous record on Jan. 1 at the Marshfield New Year's Day Marathon in the U.S.A. with his 76th sub-2:20 but followed up with two performances, one in February and the other last week, before Guinness could ratify the record.

The official recognition ceremony took place Mar. 25 in Kuki. Kawauchi smiled as he received the certificate, commenting, "My style of training involves me running about ten marathons a year, and thanks to that I was able to set this world record. I'm very happy to have been recognized as the Guinness World Record holder, but I'm not satisfied with 78 times. I'd like to take it further, to 100 times or even more." 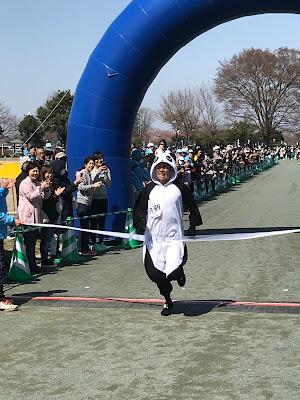 The ceremony followed Kawauchi's appearance at his hometown Kuki Half Marathon, the same race where he previously set an unofficial world record for the half marathon in a three-piece suit.A day after running 3 x 5000 m at the Heisei Kokusai University Time Trials meet, this year Kawauchi ran the Kuki Half in a full-length panda costume, outkicking his younger brother Yoshiki Kawauchi to finish 2nd overall in 1:10:03 only 40 seconds behind winner Takemaru Yamazaki. Kawauchi changed into regular clothes before being recognized for his world record.