click here for Day Two and overall results and report


With conditions superb the entire field went out hard, all 21 teams going through the 5 km mark on the 21.3 km First Stage in 14:13, 59:59 half marathon pace.  10 km came in 28:38 with 14 teams still up front before the first notable victim, 2015 Ageo City Half Marathon winner Kenya Sonota of last year's runner-up Komazawa University, lost touch, and 13 were still in play as the pack hit 15 km in 43:23.  With wins on his stages at the season's other two major ekidens Aoyama Gakuin 4th-year Kazuma Kubota made the first real move, breaking away with only sub-28 10000 m man Ken Yokote (Meiji Univ.) in tow.  On Rokugo Bridge, the First Stage's major landmark with around 3 km to go, Kubota dropped Yokote and flew on to the first exchange in 1:01:22, the 3rd-fastest ever on the First Stage and equivalent to a 1:00:47 half marathon.  Yokote lost 22 seconds over the last 3 km but kept Meiji in 2nd 18 seconds ahead of Hiroto Kanamori (Takushoku Univ.) and Taiga Machizawa (Chuo Univ.).  Top 5 contenders Waseda University, Toyo University and Tokai University were all farther back, with Sonota delivering Komazawa's tasuki only 13th. 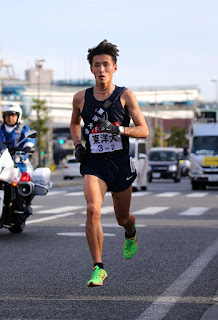 2015 National University Half Marathon champion and World University Games half marathon silver medalist Tadashi Isshiki took over from Kubota, fast and steady and keeping Aoyama Gakuin in front over the 23.1 km Second Stage.  Running instead of 4th-year Enock Omwamba, 1st-year Dominic Nyairo (Yamanashi Gakuin Univ.) rapidly moved up from 10th, but when he overtook Meiji's Shin Kimura for 2nd he quickly picked up company from 30 km national university record holder and last year's Second Stage winner Yuma Hattori (Toyo Univ.).  The pair traded surges before Hattori, in search of becoming only the fifth runner to break 1:07 on the Second Stage, shook free but despite looking strong as he closed on leader Isshiki, Hattori came up just shy in 1:07:04, 1:01:15 half marathon pace despite the extra kilometers and tough uphills near the stage's end.  Nyairo brought Yamanashi Gakuin to the second exchange in 3rd, while further back Komazawa 2nd-year Naoki Kudo moved up from 13th to 6th.  Waseda and Tokai continued to slide, both losing places. 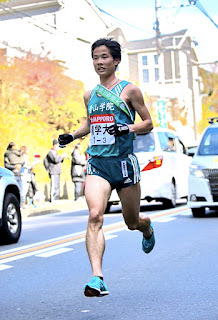 Making his Hakone debut, Aoyama Gakuin 3rd-year Yuhi Akiyama laughed and smiled as head coach Susumu Hara cracked jokes behind him over the chase car's loudspeakers. Akiyama sailed on alone and easy to cover the 21.4 km Third Stage in 1:02:24, its fifth-fastest mark ever and equalling a 1:01:31 half marathon.  Running 2nd, 5000 m national university champion Hazuma Hattori, the younger brother of Toyo's Second Stage man Yuma, showed signs of whatever setback had kept him out of November's Hachioji Long Distance meet, losing over a minute to Akiyama in what may have been the day's determining moment.  Behind him, 2015 World University Games 10000 m bronze medalist Keisuke Nakatani (Komazawa Univ.) caught Kenta Ueda, son of Yamanashi Gakuin head coach Masahito Ueda, for 3rd, but the younger Ueda fought back to keep Yamanashi Gakuin in position by 1 second.  Next across the line, Keita Shioya (Chuo Gakuin Univ.) turned in a great run to move his 16th-ranked team up to 5th.  Waseda's fortunes started to turn around as it moved up to 11th, Tokai likewise advancing to 14th.  In their places Meiji and Nihon University both nosedived toward the back of the field. 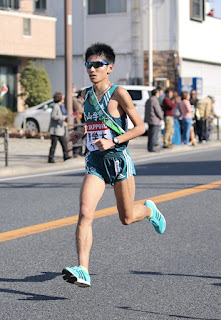 Having set the course record for the 18.5 km Fourth Stage last year Aoyama Gakuin 2nd-year Kazuki Tamura looked strong in the early going, on track to break his own record until starting to wince in discomfort with 5 km to go.  Despite the problems he was having Tamura added almost another minute to Aoyama Gakuin's lead, putting it 2:28 ahead of Toyo heading into the legendary uphill Fifth Stage.  Little else changed in the running order in the top five, but Waseda and Tokai again advanced, Waseda to 7th and Tokai to 13th, while Nihon took another hit down to 15th.

Aoyama Gakuin 4th-year Daichi Kamino became a national celebrity anointed "God of the Mountain" after his otherworldly course record run last year up the prestigious Fifth Stage, 23.2 km starting at sea level and peaking at 874 m.  A stress fracture after his 1:01:21 half marathon in February set him back for most of the year and had coach Hara downplaying expectations, but Kamino looked spry and smooth as he began, never near his 1:16:15 course record pace but still on track for a rare 1:18 clocking.  Behind him Shun Gorotani (Toyo Univ.), Shohei Otsuka (Komazawa Univ.) and Shota Miyagami (Tokai Univ.) all ran strongly while the Fifth claimed casualties in the form of Takumi Yamamoto (Chuo Gakuin Univ.), Hidaka Hayashi (Daito Bunka Univ.) and Kyota Yabushita (Meiji Univ.), all of who were on the verge of collapsing in the final kilometers. 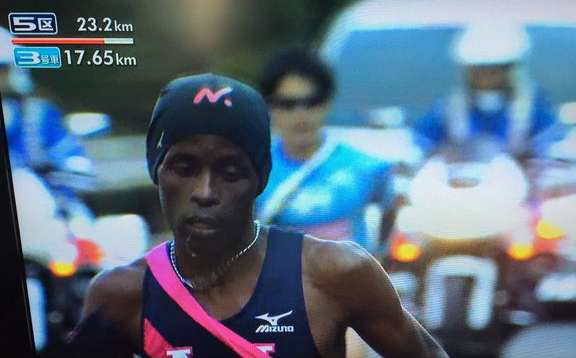 But the big star of this year's Fifth Stage was last year's runner-up to Kamino, 4th-year Daniel Muiva Kitonyi (Nihon Univ.).  With a 1:18:45 last year Kitonyi went out fast, 30 seconds ahead of Kamino on time at the Ohiradai checkpoint near 10 km and incrementally ratcheting it up as he passed his Japanese competition to take Nihon from 14th to 6th.  After Kamino had stomach troubles late in the stage and slowed to cross the finish line in 1:19:17 Nihon head coach Satoshi Ogawa began shouting encouragement to Kitonyi over his car's speakers, saying, "Stage best!  Go for the stage best!"  Kitonyi responded, wincing and gritting his teeth as he surged forward, then pumping his fists as he saw his 1:18:23 finishing time.  A devout Christian, Kitonyi publicly objected to Kamino being called "God of the Mountain" by the media and had asked to be called "Mountain King" if he won the stage.  Kitonyi follows Fifth Stage stars Masato Imai and Ryuji Kashiwabara to become just the 3rd runner to break 1:19 twice, the first-ever non-Japanese winner on Hakone's greatest stage and his name trending at #2 on Japanese Twitter.  All hail the Mountain King.

With some of the big names having faltered in the early stages and some lower-ranked schools stacking their teams with their best runners in the early going, the Fifth Stage shook things out to close to the pre-race rankings.  Finishing the day 1st in 5:25:55, Aoyama Gakuin's 3:03 lead over Toyo is less than half the margin it had last year at this point, comfortable but not unbreakable.  2nd-place Toyo ran down Aoyama Gakuin to win November's National University Ekiden, but with its star Hattori brothers already done Toyo may not have what it takes to catch Aoyama Gakuin this time left.  Komazawa's Day Two lineup is as strong as usual but it faces a gap of over 5 minutes to the lead.  Yamanashi Gakuin and Waseda are close-matched for 4th on Day Two, Waseda with the advantage in half-marathon credentials.  Nihon, currently 6th, has a good margin of safety for finishing in the ten-deep seeded bracket but will likely be moving backwards through the field and overtaken by Juntendo University, Tokai and Teikyo University.

The battle for the last spot in the seeded bracket, earning the top ten schools places at October's Izumo Ekiden and next year's Hakone, is always exciting.  Takushoku and Josai finished Day One simultaneously in 10th and 11th, with newcomer Tokyo Kokusai University an impressive 12th just 24 seconds back thanks to a brilliant Fifth Stage run by 2nd-year Takaya Hamato.  Nittai University and Chuo Gakuin are another few seconds back, 10th through 14th places all within 38 seconds.  As Day Two moves on expect the battle between them to intensify.  In a tough position after finishing Day One 18th in 5:43:22, #6-ranked Meiji will be desperate to make up the 5 1/2 minutes it needs to get back into the top 10.

NTV's live broadcast of Day Two of the Hakone Ekiden starts at 7:00 a.m. Japan time on Jan. 3.  Follow @JRNLive for live English-language coverage throughout the day.

Brett Larner said…
Some half marathon equivalencies from the first three stages, all 21.3 km - 23.1 km: