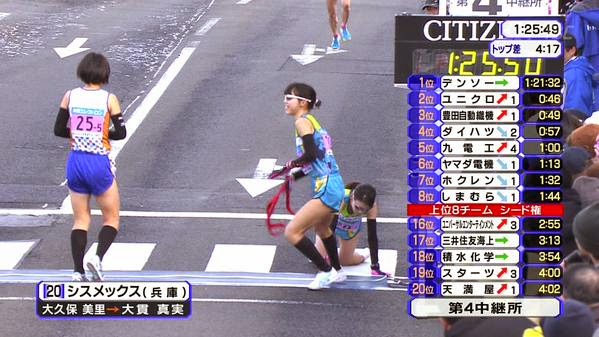 At Sunday's National Men's Ekiden the Aichi Prefecture team was disqualified after its opening runner threw the tasuki, the sash that ekiden runners exchange, across the line to the next runner as he struggled to finish, the second time in a month that this sort of rare disqualification happened after an almost identical scene at last month's National Corporate Women's Ekiden, pictured above.  Prominent sportswriter Jun Ikushima wrote the following editorial about Aichi's disqualification. 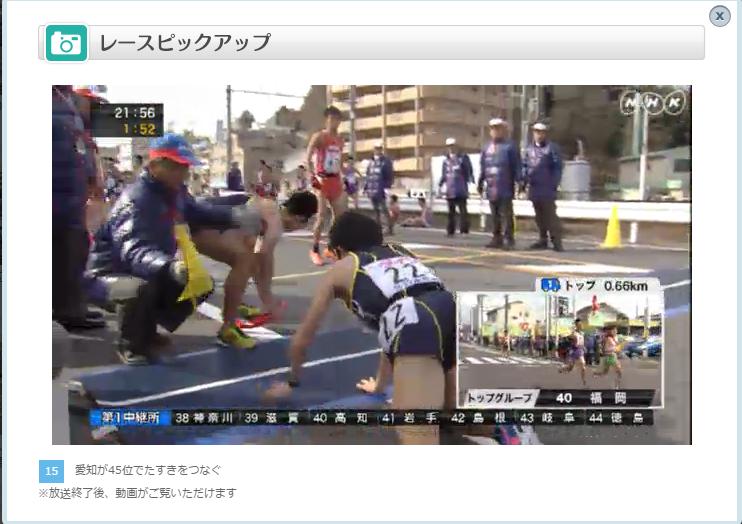 On Jan. 18 in Hiroshima, the Saitama team won the National Men's Ekiden for the first time, but unusually for an ekiden there was also a disqualification.  Responsible for running the First Stage for the Aichi team, Atsushi Yamato (Aichi H.S.) became unsteady just before the handoff zone and couldn't quite make it to the line.  He tried to hold out the tasuki to pass it to waiting Second Stage junior high school runner Shota Ezomori (Kochino J.H.S.), but, unable to connect, Yamato surprisingly threw it across the line.  Ezomori picked the tasuki up and started running, but the exchange was ruled illegal and the team was disqualified.  The entire scene was captured on the TV broadcast.

Let's take a look at the "JAAF Ekiden Standards (March, 2010 revision)" guidelines that set the official rules for the ekiden.  Section 2.6.1 dealing with exchanges states:

If interpreted strictly in accordance with this criterion, Aichi's First Stage runner who threw the tasuki across the line did not reach the exchange zone line, which would mean that the exchange was not completed.  The referees did their job.

But on the other hand, given the major importance and implications of the tasuki in the ekiden it's not surprising that fans have been saying, "That should have been allowed."  I have to agree that in the case of the ekiden there should be some latitude in application of the rules.  If a situation like this one happened again, while prioritizing the health and safety of the runners, if the exchange was not properly completed I don't see a problem with stopping the second runner and directing them to return to the exchange zone line to do the handoff again.

In other words, I'm suggesting that it would be a good idea to leave some room for the discretion of the officials.  That's because whether you're talking about overrunning the baton zone in a 400 m track relay or an early start in a swim relay exchange, the meaning and understanding of "exchange" varies depending upon the sport.  In track and swimming, timing technology is a crucial part of the process and the sport itself.  In the ekiden you are talking about seconds in the context of many hours of competition.  Compared to track racing, the impact of the actual exchange itself on the win is minimal and there is no technology being used to monitor the exchange.  Additionally, in ekidens with large numbers of teams like the National Men's Ekiden, the exchange from the First to Second Stage is very crowded and chaotic and you often see people fall during the handoff.

Since there is a rule specifying "within 20 m of the exchange zone line in the direction in which the race is traveling" it's hard to say that the rules are confusing, but I think that it would be a good idea to leave room for some flexibility around that point in how the sport is conducted.  In the wider world of sports there is usually a range of interpretation in how referees and umpires apply rules.  In soccer the referee's decision about whether a foul was committed has become a key part of the game.  I think it might be a good idea to have more of a spirit of generosity within the ekiden.

Patrick Voo said…
thanks for providing all of us 'westerners' with a better understanding of the ekiden, brett! and i agree wholeheartedly with your post and thoughts about the exchange of the tasuki - there should be room for some grace and consideration of context.
January 22, 2015 at 12:07 AM