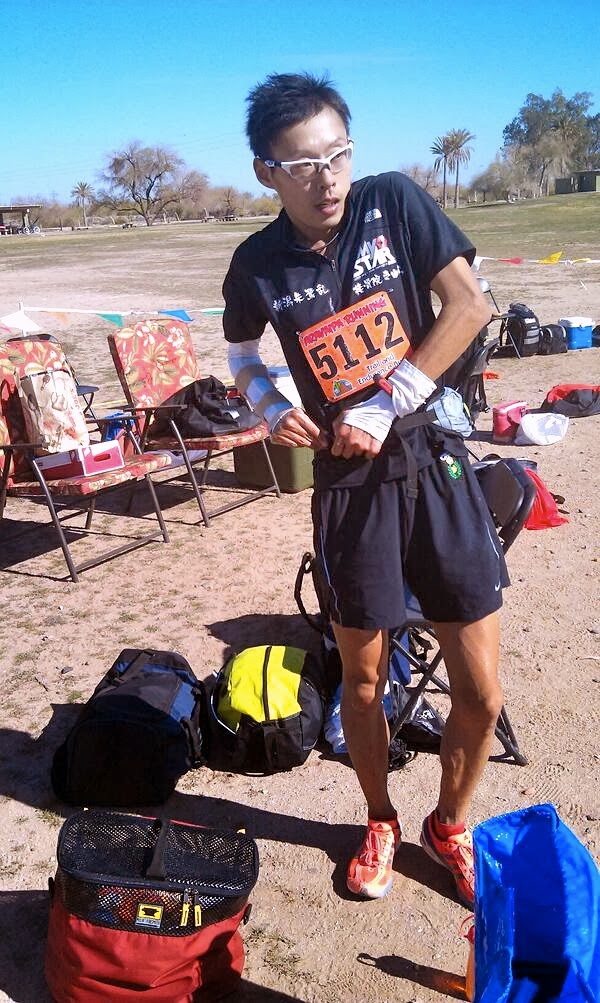 Nagata made his 100 mile and international debut Jan. 25 at the Coldwater Rumble 100 Mile Trail Run in the U.S., leading for the first two 20-mile laps before being overtaken by eventual winner Catlow Shipek (U.S.A.). Post-race he wrote about his experience.

To begin with I'd like to thank Iwamoto-san and Rina-san from Club My Star for first suggesting this opportunity. Also to everyone in Tokirun, Igarashi-sensei, Seki-sensei, Ota-san and others who supported me, I don't know how to thank you enough.

We talked to each other like that but I couldn't understand his name. (-_-;)  Cat!?  He tried to imitate a cat going meow meow but...

He went to the toilet at the end of the first loop and I took the lead.  On the second lap the sun started to shine and it got so hot that I couldn't believe it was really winter.  There were three aid stations per lap with great cheering and support, and I really appreciated the staff's efforts to understand my poor English.  In the second half of the third lap I started slowing down and the guy caught back up to me (although I think I was the only one thinking of it as being caught).  When he caught up to me he asked, "Nagata!  You doing OK?"  I could tell from the difference between his positive way of thinking and mine that he was very strong, but I couldn't give up then so I chased after him.

On the fourth lap I was going as hard as I could trying to close the gap since there were people who were looking forward to seeing how I did. I was feeling like, "Hey, jackass! Wait up!" I wonder what the gap between us was at the end of the fourth lap? I was going through pain and agony I'd never tasted before while I was chasing him.

The fifth lap took an hour longer.  On the fifth lap I used a headlamp for the first time and ran through the darkness.  I crashed into cactuses, fell lots of times, took wrong turns, and the headlamp died.  I encountered a million problems, but somehow I got to the finish.

100 miles is a very long way.  If I was told to run it all by myself it'd be impossible.  Every person I lapped, saying "Good job!" to each other gave me strength.  I felt a new world in this race and became a new person again.  I find enjoyment in this through seeing my own growth and change.  That's my style.

Thanks to Rina-san's translation, after the race I was able to talk a lot to that guy I met there in the States.  I think there are great races and great race staff in Japan too, but my words are insufficient to express how much I felt that there was an incredibly exciting world waiting just a step outside Japan.

When I get back I want to talk about all this over some drinks.  I'd like to talk more to other people who are interested in ultramarathons.