Kawauchi 2:11:52 CR in Sydney For Second Marathon Win in 3 Weeks 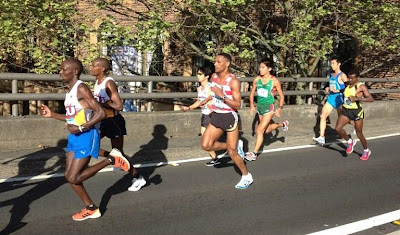 Lining up for his sixth marathon of the year after a late Friday night flight, Yuki Kawauchi (Saitama Pref.) turned in his second win in three weeks as he set a 2:11:52 course record to lead a Japanese sweep at the Sept. 16 Sydney Marathon.

Just three weeks after winning the hot and humid Hokkaido Marathon in 2:18:38, Kawauchi set off in a small lead pack on pace to break the 2:14:12 Sydney course record set back in 1994.  Splitting 1:06:08 for the first half, he soon dropped Kenyan Felix Kandie and was on his own as he pushed on to run a negative split despite the challenging nature of the Sydney course which some estimates put at two to three minutes slow.  Kawauchi crossed the line with a margin of more than four minutes over Kandie, his time of 2:11:52 taking nearly two and a half minutes off the course record and the third-best time of his career.  Next up Kawauchi will run October's World Half Marathon Championships before pursuing a 2:07 at December's Fukuoka Marathon.

Alongside Kawauchi's win, Japanese runners took the titles in the women's marathon and both the men's and women's races in the half marathon.  Mountain runner Mitsuko Hirose ran a remarkably steady 4 min/km pace in the women's marathon, splitting 1:24:23 on her way to a 2:48:49 win with Yukie Tamura five minutes back in 2nd.  2011 Ichinoseki International Half Marathon winner Takahiro Gunji of Hakone Ekiden powerhouse Komazawa University outran Australians Scott Wescott and Ben St. Lawrence for the men's half in 1:04:19, Natsumi Matsumoto taking the women's honors in 1:15:03.