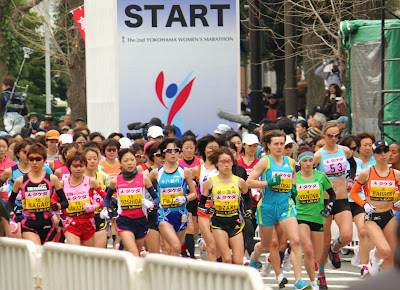 Running in near-perfect conditions on a flatter new course, 2009 World Championships marathon silver medalist Yoshimi Ozaki (Team Daiichi Seimei) ran a race record 2:23:56 to win the 2011 Yokohama International Women's Marathon and become the first Japanese woman to secure a guaranteed spot on the team for this summer's World Championships. Ozaki said before the race that her goal was only to win, not to run a fast time, but her mark was the fastest by a Japanese woman in over 2 years and close to her PB. 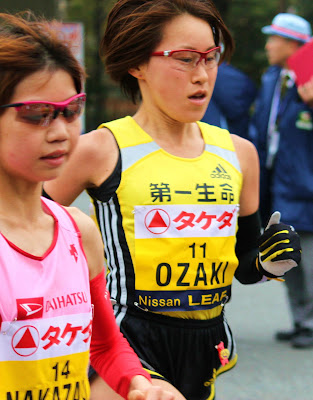 Pacemaker Shoko Mori (Team Otsuka Seiyaku) took the race out faster than planned with a 3:19 first km, but things soon settled down to 16:59 for the first 5 km. Despite being right on target pace the pack began to fracture, with debutante Yuka Izumi (Team Tenmaya) then 2:29 women Mayumi Fujita (Team Juhachi Ginko) and Kaori Yoshida (Amino Vital AC) losing touch. The pack continued to splinter as the pace accelerated again, 2009 New York City Marathon winner Derartu Tulu (Ethiopia) falling off after only 9 km. Halfway passed in 1:11:36. 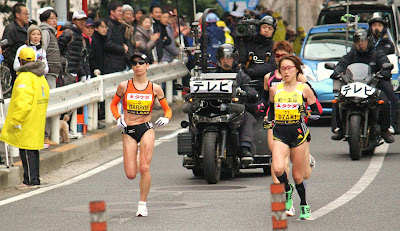 Barros and Ozaki head to head.

Following the last pacemaker's departure at 30 km Ozaki ran on the shoulder of Marisa Barros (Portugal), with 22 year old Remi Nakazato (Team Daihatsu) and 21 year old first-timer Kaoru Nagao (Team Univ. Ent.) close behind. Barros pressed the pace, whittling the pack down to three as Nagao dropped behind. With exactly 10 km to go Ozaki stepped to the front for the first time, but both Barros and Nakazato remained in contention as they took turns surging into the lead. Ozaki then abruptly hit the gas, splitting 9:52 for the final 3 km as she unleashed the same finishing speed that gave her the win at the 2008 Tokyo International Women's Marathon and her World Championships medal. It was a dominant victory that confirmed Ozaki's position as Japan's current #1 woman. 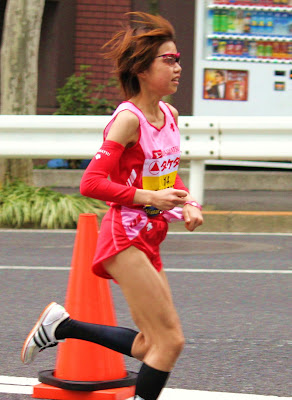 Nakazato with 1 km to go in custom handmade Adidas.

Runner-up Nakazato was almost a bigger story, staying with Ozaki until late in the race and taking 10 minutes off her PB to finish in a strong 2:24:29 in just her second marathon. Her run also marked the 100th sub-2:26:30 by a Japanese woman. Like Ozaki having cleared the federation's sub-2:26 World Championships standard, Nakazato now stands ahead of Osaka International Women's Marathon runner-up Mai Ito (Team Otsuka Seiyaku) in line for a national team spot but must wait until the outcome of next month's Nagoya International Women's Marathon to find out her fate. 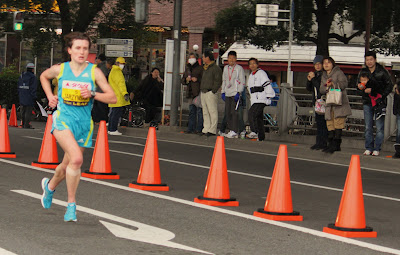 Jarzynska looking strong on the way to London.

Third placer Barros finished in a PB of 2:25:04 after having also PB'd at last year's Osaka. Her time made her the all-time 2nd-fastest Portuguese marathoner. Fourth placer Nagao had a strong debut in 2:26:58, with Poland's Karolina Jarzynska, who set a national record at the Marugame Half Marathon two weeks ago, running a PB of 2:27:16 for 5th to earn a spot at the London Olympics.

Brett Larner said…
The new course gets a thumbs up from some friends who ran and some others who watched. Being seaside a lot will depend on the wind for it to be fast in the future, but they lucked out with the weather today.
February 20, 2011 at 8:01 PM

Brett Larner said…
Sorry to hear Keyhole wasn't working for some people. With Japan switching over to complete digital broadcast in a few months I'm not sure what Keyhole's future will be.
February 20, 2011 at 8:34 PM