They were the two best university teams ever assembled and they ran like it. After two-time defending Hakone Ekiden champion Toyo University and 2010 National University Ekiden champion Waseda University both broke the Day One Hakone course record, Waseda hammered Toyo on the first two stages of Day Two to retake the lead and then held on to take the overall win in a course-record 10:59:50, the first school to ever break 11 hours on the celebrated 10-stage, 217.9 km course. Toyo nearly ran Waseda down on the final stage, finishing 22 seconds back in the closest margin of victory in Hakone's 87 year history and likewise breaking the course record by over 3 minutes. It was a classic duel between the elite Waseda, symbolic of the privilege, connections and money at the top of Japanese society, and the underdog Toyo, a minor school with a young coach with an eye for hidden talent and a group of guys who worked their way up together to become champions.

Waseda became the first school ever to set the course records at all three major university ekidens, October's Izumo Ekiden, November's National University Ekiden Championships and the Hakone Ekiden, in one season. It was the first Hakone win for Waseda in 18 years and the first under the leadership of head coach Yasuyuki Watanabe. To his credit, Watanabe's first words in his victory interview paid respect to his rivals, as he said, "We owe this to Toyo. They were incredible." The remarkable times were an indication of the strength of both schools, each of which had seven men with 10000 m PBs under 29 minutes. Waseda averaged 3:01.7 per km and Toyo 3:01.8 per km, meaning that with an average stage length of 21.8 km all ten runners on each team averaged under 64 minutes for a half marathon. The results were so strong that powerhouse Komazawa University, which missed the course record by only 36 seconds thanks to a new record by sophomore Kenta Chiba on the downhill Sixth Stage, was well over a kilometer behind in 3rd.

Four teams sprint it out for three spots after nearly 218 km.

The race was close-pitched and thrilling not only among the leaders but virtually everywhere further back in the pack. Tokai University and Meiji University battled throughout the day for 4th, finishing 12 seconds apart. Chuo University and Takushoku University were likewise head-to-head for 6th, finishing 4 seconds apart. In the biggest nail-biter, four schools raced over the last kilometer for the final three spots in the top ten and a seeded ticket to the 2012 Hakone Ekiden. In the heat of the last sprint one of them, Kokushikan University first-year Natsuki Terada, incredibly took a wrong turn with less than 200 m to go and went off-course but even more incredibly made it back into the pack and clipped Josai University anchor Shogo Kooka to take 10th and send Josai back to the qualifiers.

In addition to breaking the Day One and overall course records, Waseda and Toyo both ran the all-time second and third-fastest times on the Day Two course. After all five Day One stages saw winning times within their all-time top tens, three of Day Two's stages had multiple top-ten entries. High-level and record-breaking, this year's Hakone Ekiden capped a watershed year in Japan's university distance running, one full of promise for the future.

Race Summary
Starting off with a 27-second deficit, Waseda senior Hiroki Takano caught up to Toyo's Takanori Ichikawa at the start of the downhill 5 km into the 20.8 km, ~900 m elevation loss Sixth Stage. It was a race of surges on twisting, steep mountain roads made slick by overnight snowfall, and neither runner could break away. Behind them, last year's Sixth Stage winner and Saku Chosei H.S. graduate Kenta Chiba (Komazawa Univ.) made short work of Tokai and Meiji, moving up to 3rd at stage record pace.

Nearing the end of the steepest downhills and still running abreast Ichikawa, Takano slipped on a sharp left turn and fell. It could have been a race-deciding accident, but he bounced up and first retook then broke away from Ichikawa. He finished the stage with a lead of 36 seconds, a margin which proved decisive. Urged on by head coach Hiroaki Oyagi, Chiba accelerated over the last 5 km of the stage and ran 58:11 to break the 10 year old stage record by 10 seconds.

Waseda substituted junior Yusuke Mita in for injured sophomore star Hiroyuki Sasaki on the 21.3 km Seventh Stage, while Toyo ran reliable senior Shogo Otsu. It was a critical opportunity for Toyo to close the gap but Otsu, injured in the summer, was unable to perform and lost 48 seconds, finishing 4th on stage time in 1:04:49 to Mita's stage-second 1:04:01. Komazawa first-year Shinobu Kubota made the all-time Seventh Stage top ten with a 1:03:43 clocking.

Toyo, down 1:24 with three legs to go at the start of the 21.5 km Eighth Stage, made a concerted effort to run down Waseda. Senior Yu Chiba ran a stage-best 1:06:13 to pick up 27 seconds on Waseda's Takashi Kitazume, almost exactly 1/3 of the deficit. Further back in the field the race for the seeded top ten bracket heated up as less than one minute separated 9th place Teikyo University from 13th place Koku Gakuin University.

On the 23.2 km Ninth Stage, the longest of Day Two, Toyo's Takaaki Tanaka, last year's Seventh Stage winner, outran Waseda's Yuki Yagi, a former high school national champion, but could only pick up 17 seconds. This left a margin of 40 seconds between Waseda anchor Kenji Nakashima and Toyo anchor Kenji Yamamoto. The race for the seeded bracket took an unexpected turn as Nittai's Takuya Tanino suffered leg cramps 5 km from the end of the stage and plummeted from 7th to 12th. 1:09 separated 8th from 13th.

With 40 seconds to find over 23.1 km, Toyo's Yamamoto, with a half marathon PB of 1:04:02, went after Waseda's Nakashima, holder of a 1:04:00 PB. Announcers counted off the seconds as Yamamoto drew closer and closer, looking smooth and determined as he bore down on the wincing, straining Nakashima. It was the race of Yamamoto's life but the gap was too big and he could get no closer than 20 seconds. In the end Nakashima had the better kick, winning by a margin of 22 seconds, the closest ever, to give Waseda its first win in 18 years.

In any other year 3rd placer Komazawa's time of 11:03:53, just 36 seconds off the old course record, would have been hailed as outstanding, but this year they were a distant afterthought. Tokai, coming up from the depths of the B-rank qualifiers to return to the seeded bracket, beat out Meiji for 4th, but the Meiji team was elated nevertheless in its best finish since 1963. Takushoku was likewise happy despite losing to the perpetually-strong Chuo as it took its best-ever placing, 7th. 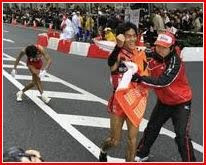 Yamanashi Gakuin and Nittai overtook Koku Gakuin in 11th, and the three worked together to catch up to Josai, Teikyo and Aoyama Gakuin running in 8th through 10th. First Teikyo and then Yamanashi Gakuin dropped behind, leaving four schools to kick for the last three seeded spots. Nittai and Aoyama Gakuin pulled ahead in the sprint finish to take 8th and 9th. Supporters of Koku Gakuin, trying for its first-ever seeded finish, must have suffered heart failure when anchor Natsuki Terada followed a camera car off-course less than 200 m from the finish, and Josai's supporters must also have been at risk when Terada came back to take 10th. Along with Josai, Yamanashi Gakuin and Tokyo Nogyo were seeded this year but knocked down to the qualifiers for 2012.

Samurai Running said…
"full of promise for the future"

Just the words I love to hear!

All the best to JRN for 2011 and on behalf of the silent majority thanks for your great reporting as usual!

It's really fantastic to see Hakone continue and build on its great tradition isn't it?

TokyoRacer said…
I second Scott's comments. Please keep up the good work in 2011.
It's great that you are spreading the word about Japanese elite running, and nice to see that letsrun.com often links to your articles.
January 4, 2011 at 10:40 AM