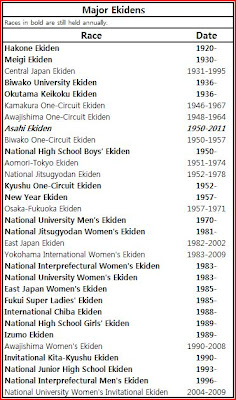 The ekiden that decides who is #1 in Japan. Once known by that phrase, the curtain is set to fall on the 60+ year history of the Asahi Ekiden. Many famous athletes' careers were born on the winding, hilly roads joining Fukuoka and Kita-Kyushu, but the sound of their footsteps on the seven-stage, 99.9 km course will be heard for the last time on Jan. 10.

Team Yawata Iron & Steel won the first running of the Asahi Ekiden in 1950. At the fourth running, Hakone Ekiden champion Chuo University took the win in its first appearance. It was the only time a university team ever won, but following Chuo's victory Hakone-winning teams were invited to do battle against professional teams to decide who was the best in Japan.

A Japanese creation, the 'ekiden' began in 1917 with the Tokaido Ekiden as a commemoration of the 50th anniversary of Tokyo becoming the national capital. The name of the race, chosen by Rikuren director Chiyosaburo Takeda, hinted at the memory of Japan's Edo-era messenger route. An anchor in that first ekiden, the 'father of Japanese marathoning' Shizo Kanaguri went on to found the Hakone Ekiden three years later, contributing to the spread in popularity of the ekiden.

Seven years after the Asahi Ekiden began, the National Jitsugyodan Ekiden was launched. Team Yawata Iron & Steel also won its first running, but the atmosphere of the new event was different. Looking back, a member of the team, Mexico Olympics marathon bronze medalist Kenji Kimihara, 69, said, "The Asahi Ekiden began as a local event, and it was the one we cared the most about." From the very first running, Team Asahi Kasei ran in every Asahi Ekiden but did not run in the 2nd-7th National Jitsugyodan Ekiden. Head coach Takeshi Soh commented, "Being from Kyushu, it was unthinkable that we wouldn't appear in this kind of local ekiden."

However, in 1988 the National Jitsugyodan Ekiden moved from mid-December to New Year's Day, and the Jan. 2-3 Hakone Ekiden took on every-increasing importance. Tokyo-based Team S&B winning four-straight years at the Asahi Ekiden showed that West Japan's claim to be the stronghold of Japanese distance running was slipping. In 1995 the Central Japan Ekiden, along with the Asahi Ekiden known as one of the 'Big Three Japanese Ekidens,' closed its doors. The 'Big Three' name likewise was extinguished. The Asahi Ekiden saw its role shift from being the battleground of the best to a testing ground for developmental athletes.

A two-time Asahi Ekiden stage winner and Barcelona Olympics marathon silver medalist, after becoming head coach of Team Toyota Kyushu Koichi Morishita used the Asahi Ekiden, "as a place for rookies to prove themselves. It was a historic race, and so if a young athlete ran well there it would do a great deal to build their self-confidence."