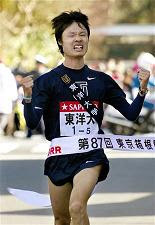 For the third-straight year Toyo University's Ryuji Kashiwabara was the deciding factor on day one of Japan's biggest race, the Hakone Ekiden. Starting the 23.4 km, nearly 900 m climbing Fifth Stage in 3rd place 2:54 behind leader Hideki Inomata of rival Waseda University, Kashiwabara ended up 27 seconds ahead, giving Toyo the win as the team broke the five-stage, 108.0 km Day One course record by over a minute to finish in 5:29:50. Kashiwabara, who was been injured most of the year, missed his own course record by less than a minute but still finished faster than any other runner ever has, winning the stage in 1:17:53. Inomata, in his first and last Hakone, brought Waseda home in 2nd in 5:30:17, likewise clearing the old course record held by Yamanashi Gakuin University for eight years. With seven men holding sub-29 minute 10000 m PBs each Toyo and Waseda were already the best two university teams Japan has ever seen, and their results on Day One confirmed this distinction.

Kashiwabara takes the lead going up the mountain.

But it wasn't only Toyo and Waseda. The first six schools, top-ranked Toyo and Waseda, contenders Tokai University, Meiji University and Komazawa University, and unexpectedly strong minors Koku Gakuin University, all ran times within the previous all-time top ten for the Day One course. The Fourth Stage saw a course record by Teikyo University senior Tomonao Nishimura. All four other stage had winning times within the all-time top six including a stunning run on the 23.2 km ace Second Stage by Akinobu Murasawa (Tokai University), who started in 20th, last place, and finished 3rd in a stage-best 1:06:52, the 4th-best ever on the stage and only 5 seconds away from the best ever by a Japanese runner. Despite the fast time by Toyo, 18 of the 20 teams finished within the 10 minute window before a time penalty would be imposed on Day Two. Taken together with the ideal weather conditions, it all adds up to a ringing confirmation that the exceptional improvement in track times seen among university runners in 2010 was not an illusion and that whatever the shortcomings of the current generation of Japanese marathoners, the current student generation is the best Japan has ever had and is doing what is needed on its part for the country to be competitive again.

Looking at the overall race, Waseda first-year Suguru Osako, the Asian Jr. half marathon area record holder with a PB of 1:01:47, got the race started by running a largely solo 1:02:23 for the 21.4 km First Stage, the sixth-fastest ever but the best-ever by a freshman and equivalent to a new 1:01:31 PB. Osako was challenged partway by former Saku Chosei H.S. teammate Naohiro Domoto (Nihon Univ.), but Domoto fell away after 12 km to finish 2nd on the stage in 1:03:16.

Osako, the 2010 Ageo City Half Marathon winner, handed off to 2009 Ageo winner and fellow Saku Chosei grad Shota Hiraga on the 23.2 km Second Stage, Hakone's most competitive. Hiraga ran the stage entirely alone, never challenged by another runner but still finishing in 1:07:50 to become the 10th Japanese runner to break 68 minutes in Hakone history. Domoto handed off to Kenyan track champion Benjamin Gandu (Nihon University), who ran an all-time fifth-best 1:07:09 while trying to run down Hiraga.

Murasawa ready to run the field down. Click photo to enlarge.

In an unusual development, four of the Second Stage's best runners started in the last six spots. Kenyan first-year John Maina (Takushoku Univ.), winner of October's Yosenkai 20 km in 58:23 and a 27:53.50 10000 m runner, swiftly overtook track ace Tetsuya Yoroizaka (Meiji Univ.) and relative unknown Takehiro Deki (Aoyama Gakuin Univ.), who ran an all-time Japanese collegiate #3 58:51 at the Takashimadaira 20 km in October. The trio worked together, passing other runners by the half dozen to move into the top five. Behind them Murasawa, another Saku Chosei H.S. grad, ran alone, cutting down the distance from last place as he covered in the first 5 km on sub-58:30 half marathon pace. Just after Maina, Yoroizaka and Deki made contact with a large pack Murasawa did the same, charging past. Maina and Yoroizaka went went him while Deki took his time. Yoroizaka soon dropped away, and Murasawa hammered the faster Kenyan for nearly 10 km before breaking him on the first of the large uphills in the stage's final third.

Murasawa continued on virtually unchanged, finishing 3rd overall and winning the stage best in a stunning time for a second-year, 1:06:52, equivalent to faster than 61 minutes for a half marathon on a net uphill course and outrunning better-credentialled Kenyans Gandu and Maina. He also set the all-time regular twenty-team year Hakone passing record, picking up seventeen places. Yoroizaka rallied to overtake a fading Maina and finish in the third-best time on the stage, 1:07:36, likewise joining the all-time top ten. The mysterious Deki also overtook Maina, running 1:07:50 minutes. He proved that his miraculous Takashimadaira performance was not a fluke and made it four Japanese under 68 for a course on which only nine in history had ever accomplished the feat. Maina was sixth on stage time in 1:08:04 while sub-29 first-year Keita Shitara (Toyo Univ.) just missed making it five, seventh on stage time in 1:08:09. While there were no serious breakdowns several aces underperformed, notably top-ranked 10000 m runner Yusuke Hasegawa (Jobu Univ.) and Nittai ace Takuya Noguchi.

Waseda held its lead on the 21.5 km Third Stage and 18.5 km Fourth Stage. Ace Yo Yazawa underperformed somewhat and lost ground to his pursuers with a stage sixth-best 1:03:45 on Third. Tokai first-year Daichi Motomura had a big run to move into 2nd on the Third Stage, while the stage best honors went to Kenyan Cosmas Ondiba (Yamanashi Gakuin Univ.), who ran an all-time third-best 1:02:19.

Toyo University lost ground to Waseda on both the Third and Fourth Stages, going from a 2:20 deficit at the end of Second to 2:35 at the end of Third to 2:54 at the end of Fourth. B-list Waseda runner Yuki Maeda brought the race of his life to Fourth, doubling Waseda's lead from 1:09 to 2:17 and missing the stage record by just 1 second. Further back Teikyo University captain Tomonao Nishimura scored an unexpected stage record, running 54:34 to break the old record by 31 seconds.

With everything set for the Fifth Stage Kashiwabara excelled, methodically taking down 28:47 10000 m Tokai man Tsubasa Hayakawa's 37-second advantage in the first 5 km and running down leader Inomata just over 10 km later. Kashiwabara fell short of the stage record but after winning was the most elated and emotional he has ever been on camera, his satisfaction at the success after a long, unlucky year clear to see. Inomata and Hayakawa held their positions, a credible achievement given the unpredictable effects of the Fifth Stage's uphill. Others were not so lucky, but several people had breakthrough runs. Second-year Hiroki Oe (Meiji Univ.) was second on time, running 1:19:52 to become one of just a handful of runners to ever break 1:20. Unknown Shun Amano (Kanagawa Univ.) just missed joining the club with a 1:20:02 for third-best on the stage.

Waseda head coach Yasuyuki Watanabe said before the race that if Waseda was within one minute of Toyo at the end of Day One he was confident of the overall win on Day Two. Toyo head coach Toshiyuki Sakai evidently had similar feelings, saying he wanted Kashiwabara to be within 2:30 of Waseda at the start of the Fifth Stage. Kashiwabara was 2:54 behind at the start, a deficit of 24 seconds, and finished 27 seconds ahead. Taken together it is clear Sakai was estimating a one-minute deficit on Day Two. How this plays out remains to be seen, but expect a close-pitched, furious race. Both Toyo and Waseda hold two A-list starters in reserve, but Waseda is suffering from injuries to two of its key players, Hiroyuki Sasaki and Fuminori Shikata. Their loss could be fatal, but at the same time Maeda's superlative Fourth Stage performance could end up being the critical element in a Waseda victory. Expect Watanabe to put juniors Yusuke Mita and Yuki Yagi in on the Eighth and Ninth Stages and then to be praying that Waseda can hold on over the anchor stage.

Tokai and Meiji have spent their best runners and are likely to fade on Day Two, but Komazawa is still in range to feasibly move up on the leaders. Other pre-race favorite Nittai struggled with the failed performances of senior aces Noguchi and Deguchi and will be aiming just to maintain its seeded-bracket position. Look for places six through thirteen, separated by less than two minutes, to battle it out for a top ten finish and a seeded placing for next year's Hakone Ekiden.

Emiko said…
Thanks for the most updated Hakone Ekiden's Day One result. I started watching the race but had to return to the US! I look forward to your Day Two report, perhaps tonight!
January 3, 2011 at 9:45 AM

Michael said…
Thanks for the amazing update! I used to live and run in Japan. I always watched this race each year. I was in Japan over the holidays in 2009 and 2010 but not there this year. I love watching Kashiwabara run. He's a monster!!!
January 3, 2011 at 12:09 PM

Anonymous said…
Thank you for the coverage & summary. Kashiwabara really was a beast at that 5th stage, but I'm hoping Waseda can pull through for the championship. Right now we're leading Toyo by 40 seconds in the final 10th stage. 頑張れ、早稲田！
January 3, 2011 at 12:58 PM