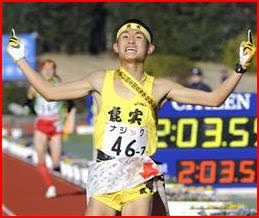 Kazuto Nishiike (Suma Gakuen H.S.), who finished 0.02 seconds out of the medals in the boys' 3000 m at last summer's Youth Olympics, took the race out hard with a 29:35 for the 10 km First Stage. Kagoshima Jitsugyo's Takashi Ichida was just 3 seconds back, with another 5 seconds separating Ichida from pursuers Sendai Ikuei H.S. and Kyushu Gakuin H.S. Suma Gakuen's Second Stage runner Yudai Yamamoto lengthened the team's lead over Sendai Ikuei and Kyushu Gakuin, while Kagoshima Jitsugyo fell to 7th.

The 8.1075 km Third Stage, a showcase for the top Kenyan high schoolers in Japan, saw a shakeup to the runner as defending champions Sera H.S.' new ace Charles Ndirangu delivered a big performance. With a 36 second deficit at the start of the stage Ndirangu moved up from 10th to the lead, running dead even with Samuel Wanjiru's stage record and ultimately finishing just 1 second off Wanjiru's seemingly unbreakable mark of 22:40. Michael Getange (Aomori Yamada H.S.) likewise had a strong run to move into 2nd ahead of Wanjiru's alma mater Sendai Ikuei, Kagoshima Jitsugyo, Kyushu Gakuin and 2008 national champion Saku Chosei H.S.

Sendai Ikuei made the strategic decision to put its current Kenyan Bernard Waweru on Fourth Stage, usually the sign of a weaker athlete, but Waweru was successful in moving Sendai Ikuei into 2nd with a stage best run. Sera held a lead of 18 seconds over Sendai Ikuei at stage's end, with Kyushu Gakuin moving up to finish the stage dead even with cross-island rivals Kagoshima Jitsugyo. Kagoshima Jitsugyo pulled away on the Fifth Stage, overtaking Aomori Yamada for 3rd but failing to make dent in Sera's 28 second lead. But Kagoshima was saving its best for last.

Kagoshima Jitsugyo's Hiroshi Ichida, the twin brother of its First Stage runner Takashi, took the stage best to put his team in range. Ichida outran Sera's Takuya Fujikawa by 14 seconds, cutting the lead in half. Kagoshima anchor Koki Takada quickly ran down stunningly named Sera anchor Naruhei Daikuya. Entering the track together for the final 500 m, Takada waited until the very last 250 m to kick away from Daikuya, winning by a margin of 6 seconds and just sneaking under 2:04. Kyushu Gakuin overtook Sendai Ikuei for 3rd, with Suma Gakuen moving back ahead of Aomori Yamada thanks to a Fifth Stage best by Takuma Sano. 2008 winner Saku Chosei, a virtual factory for top high school talent in the last 7 or 8 years, was only 7th.

In a post-race interview with TV broadcaster NHK, Kagoshima Jitsugyo head coach Sadanori Kamioka commented, "When we finished the First Stage in 2nd I was very confident because I knew we had our strongest runners on Sixth and Seventh. With 1 km to go I knew we had it." Anchor Takada agreed, saying, "When I caught up to the leader at 4 km I decided just to take it easy the rest of the way and outkick him on the track. I had planned to outkick him with 150 m to go but could see he was struggling so I went a little farther out." Kamioka thanked the people of Kagoshima prefecture for the school's first national title, saying, "This victory was won by everyone in Kagoshima."

Samurai Running said…
I saw this race from the TV inside the sauna of a hot spring resort.

I swear I've never been able to stay in the sauna so long! only coming out to to rinse with ice water and I was back in ;)

Great race, other then running, no better way to spend a cold boxing day afternoon.