The 16th Rome Marathon takes place this Sunday, Mar. 21. In the 50th anniversary year of 1960 Rome Olympics, the Rome Marathon has formed a partnership with the Tokyo Marathon, site of the 1964 Olympics, to work together to promote cooperative bids from each city for the 2020 and 2024 Olympic Games. A handful of elite Japanese runners will join the Rome field this year for the first time, two as invited elites and three as special guests in honor of the Rome-Tokyo cooperative relationship. As the 50th anniversary of the legendary barefoot win by Ethiopian great Abebe Bikila in the 1960 Olympics, Rome organizers have offered a unique bonus: if either the men's or women's leader in this year's race runs the final 300 m over cobblestones barefoot they will receive a 5000 euro bonus and 20 seconds off their finish time to compensate for the time spent stopping and taking off their shoes.

The men's race features a solid field of young Kenyan and Ethiopian runners, most running their second marathons after 2:10-2:11 debuts. At the head of the field are Kenyans Nicholas Kamakya and Benson Barus, both of whom ran under 2:09 at last fall's Beijing Marathon and both of whom stand strong chances for the win on Rome's historic cobblestone course. Countryman Vincent Kiplagat is the only other runner with a recent time under 2:10, but almost any of the nine other athletes with times under 2:12 could step up and contend for the win. Of particular interest is Italian Daniele Meucci who is debuting at the marathon after running a 1:02:41 half marathon PB earlier this year. 2009 Copenhagen Marathon winner Toyokazu Yoshimura is the only invited Japanese man in the field and hopes to break into the top 10 with a 2-3 minute PB. Joining him is Josai University's Shohei Mita, making his marathon debut as the youngest man in the field and one of Rome's guest runners. 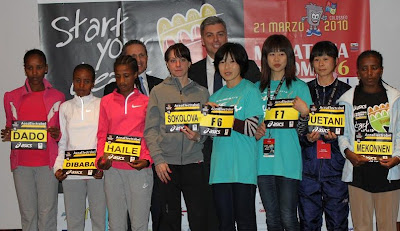 The elite women's field is more evenly matched and notable for the absence of Kenyan women. By far the most interesting facet is the marathon debut of Mare Dibaba, who earlier this season set the Ethiopian half marathon national record of 1:07:13 at the Ras al Khaimah Half Marathon. Fellow Ethiopians Firehiwot Dado and Kebebush Haile hold recent times in the 2:27-2:28 range and should be up front along with Ukrainian Tetyana Filonyuk. Lithuanian Zivile Balciunaite has the second-fastest PB in the field, 2:25:15 from the 2005 Tokyo International Women's Marathon, but she has stuggled to break 2:30 in recent seasons. 2009 Hokkaido Marathon 3rd place finisher Satoko Uetani is the only invited elite Japanese woman in the field. With a PB-level performance she has a lock on a top-10 spot and could finish as high as 5th. The fastest woman, Japanese guest runner Kayoko Obata, ran 2:27:19 in January's Osaka International Women's Marathon in what she said at the time was her retirement run. Whether she is running Rome seriously remains to be seen. Mineko Yamanouchi, a retired sub-2:30 woman, is the other guest runner. 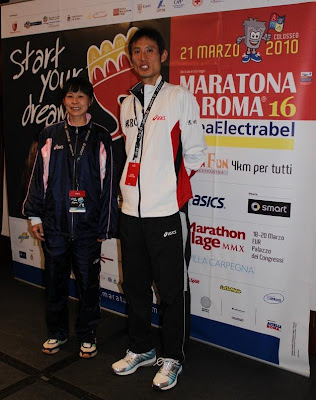 JRN will bring you exclusive photos and reports from the Rome Marathon throughout the weekend. Check back for updates.