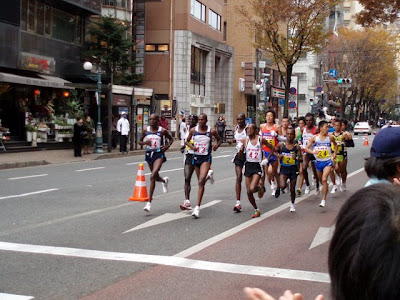 Beijing Olympics marathon bronze medalist Tsegaye Kebede of Ethiopia followed through on his promise to run a PB by scoring a resounding 2:06:10 victory in the 2008 Fukuoka International Marathon. Beijing gold medalist Samuel Wanjiru was on hand to watch Kebede smash his year-old course record by 29 seconds; South African great Gert Thys' Japanese soil record of 2:06:33 from the 1999 Tokyo International Marathon also went by the wayside. Kebede will next have a chance to take down Wanjiru himself in April's London Marathon.

Team Kanebo's Satoshi Irifune ran his second marathon PB of the year to finish 2nd in 2:09:23 despite fading in the final kilometers, barely holding off an incredible late charge by Team JR East Japan's Arata Fujiwara, who ended up 3rd in 2:09:47. Irifune provisionally qualified for the Japanese national team at the 2009 World Championships in Berlin. Barring a slew of spectacular performances in the remaining three selection races, it will be Irifune's second appearance in the World Championships marathon after running on the 2005 Helsinki team.

Despite snow the day before, race day dawned with excellent conditions; cloudy, windless and 5.5 degrees. Pacemaker and former Komazawa Univ. ace Noritaka Fujiyama took the lead pack through 10 km running between 3:01 and 3:02 per km, on pace for a finish time of 2:08:00. After his departure at the 10 km mark the remaining three African pacemakers maintained the same pace. The large pack of thirteen competitors including all the major Japanese contenders and major overseas names stayed together through a halfway split of 1:04:02 before beginning to splinter. At 25 km it was down to ten.

Approaching 30 km Kebede moved up onto the shoulder of the last remaining pacemaker and began to push the pace, breaking the pack further. Half the runners, including Olympians Jon Brown (Canada), Shigeru Aburaya (Team Chugoku Denryoku), and Jose Manuel Martinez (Spain) immediately dropped back, and Arata Fujiwara and Felix Limo were also soon adrift. At 30 km only Kebede, Irifune, Yuko Matsumiya (Team Konica Minolta) and Tomoyuki Sato (Team Asahi Kasei) were at the front. 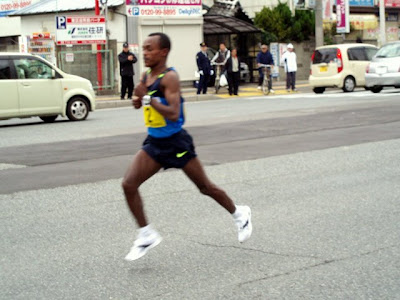 Tsegaye Kebede on his own.

When pacemaker John Kales dropped out at 30 km Kebede instantly went into action. He virtually sprinted away from the three 2:09-level Japanese runners, clocking a 14:17 5 km split between 30 and 35 km and guaranteeing himself the win. Matsumiya led the Japanese chase pack, Sato temporarily falling back before regaining contact. Fujiwara and Limo ran together in 5th position, but rounding the turnaround point at 31.6 km Fujiwara threw away his arm warmers and summarily dropped Limo.

Kebede slowed after 35 km, but it was evident not only that he was on track for a PB performance but that he stood an excellent chance of taking Wanjiru's course record. As Kebede sped away into the distance, Matsumiya, identical twin of 30 km world record holder Takayuki Matsumiya, fell into trouble, slipping to the rear of the Japanese pack as Sato moved up at 32.7 km to push the pace and try to stay on track for a 2:08 finish. Irifune tailed Sato by a step as Matsumiya soon lost contact. Fujiwara looked to be in a position to catch the three but in turn ran into problems of his own and began to slip. 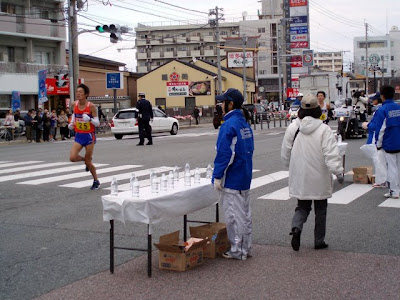 Even as Irifune and Sato's splits inched toward a 2:09 finish they moved away from Matsumiya and Fujiwara. At 35 km Irifune, a 27-minute 10000 m runner, had had enough of Sato's charge and responded with his own attack, swiftly opening a gap. Despite laboring visibly for the remainder of the race and continuing to slow he was able to continuously pull away.

At 38 km Kebede was 7 seconds ahead of Wanjiru's course record pace and looking strong. Fujiwara recovered from his problems and, like Kebede, looked incredible. He overtook Matsumiya at 36.9 km to move into 4th and once more advanced toward the fading Sato. Again he stalled.

Kebede hit 40 km in 1:59:45, 18 seconds ahead of Wanjiru's pace and on track to break the Kenyan's course record by 20 seconds. Irifune looked to be in trouble and losing focus but continued on without interruption. Approaching 40 km Fujiwara was almost out of sight behind Sato, but he launched an incredible spurt and flew past Sato at 40.9 km. Ahead, Kebede also took off with 1 km remaining, deeply and truly impressive as he entered the track for a final lap. Was Japan's first 2:05 in range? So close, but not quite. He sprinted down the final straight to a 2:06:10 finish, a PB by 30 seconds, course record by 29 seconds, and Japanese soil record by 23 seconds. He clocked 1:02:08 for the second half of the race and 6:25 for the final 2.195 km, 9 seconds better than Wanjiru's final kick last year.

Irifune appeared to be staggering as he entered the track, while Fujiwara was giving everything he had to catch up and take the top Japanese position. Fujiwara ran 7:03 for the final 2.195 km, the fastest in the field after Kebede, but Irifune was out of range and he settled for 3rd in 2:09:47 to Irifune's PB 2:09:23 2nd place finish and narrowly missing out on a World Championships team spot. Sato held on for a 2:09:59 4th place finish, his third time under 2:10, while Matsumiya faded to 8th, overtaken by Limo, Martinez and Kenyan David Makori.

Kebede's mark does much to return Fukuoka to a place of prominence among the world's great marathons, particularly in conjunction with the three 2:06 times run in Fukuoka in the previous two years. 42 seconds faster than world record holder Haile Gebrselassie's winning time in 2006 and 29 seconds faster than Beijing Olympics gold medalist Samuel Wanjiru's winning time last year, Kebede's mark establishes him as one of the best in the world and a major front pack contender in next year's London Marathon.

Complete results with detailed splits are available in English here.