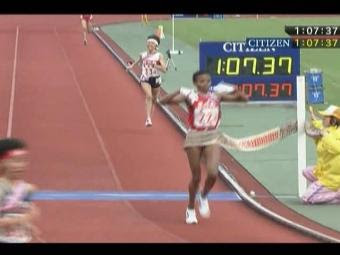 
The All-Japan High School Ekiden Championships took place Dec. 21 in Kyoto, broadcast nationwide and commercial-free on government-sponsored NHK Television. A widespread heatwave brought warm, sunny conditions for the first race of the day, the five-stage, 21.0975 km High School Girls Ekiden. In only its third appearance in the championship ekiden, Toyokawa High School of Aichi Prefecture overcame a new rule intended partly to limit the effectiveness of its Kenyan ace Wysela Wylim to take its first national title. Defending champion Ritsumeikan Uji High School finished 3rd, a fantastic performance by anchor Ikumi Natsuhara not quite enough for her to catch rival Ai Kuboki of Kojokan High School, who finished in 2nd just 4 seconds back from Toyokawa's Wylim.

1st Stage - 6.0 km
A new rule this year in both the girls' and boys' races followed a nationwide trend in championship ekidens by banning non-Japanese runners from the longest, most competitive stages, in this case the 6.0 km 1st stage. No rationale for the change was presented to the television audience. Perhaps as a consequence of this elimination of runners unafraid to race from start to finish, the first kilometer was a very slow 3:23, 11 seconds slower than last year's race when two Kenyan 'exchange students' led the way. A pack of four made up of defending champion Ritsumeikan Uji, last year's 2nd and 3rd place teams Kumamoto Chiharadai and Kojokan, and newcomer Toyokawa pulled away from the rest of the field. Kojokan's Rei Obara took the lead in the final third of the stage, giving Kojokan a 10 second lead.

2nd Stage - 4.0975 km
Kojokan's Aika Tsutsumi widened her team's lead to 18 seconds, but with 1 km to go Toyokawa's Nanaka Izawa burst from the chase pack, picking up 11 seconds on the leader to finish just 7 seconds back.

By 2 km Toda paid the price for early aggression, slowing dramatically as Shimomura came back with a vengeance and passed Toda with 660 m left. Toda tried to hang on and Shimomura gradually applied more pressure, but Toda was tenacious and once again pulled even. With 250 m to go Toda again moved into the lead, and with her last sprint opened a gap on Shimomura. In battling each other the two widened the lead over Suma Gakuen to 20 seconds.

5th Stage - 5.0 km
The race was over almost as soon as the race began, as Toyokawa's Kenyan anchor, Wysela Wylim, barred this year from repeating last year's brilliant 1st stage run, sailed effortlessly past Kojokan's Ai Kuboki to take the lead. However, by halfway Kuboki started to narrow the gap reeling Wylim back in. In the distance, Ritsumeikan Uji's Ikumi Natsuhara was overtaking Suma Gakuen's Akane Abushita in the race for 3rd, passing her at 3 km. Ahead, by 3 km Wylim's lead was down to 8 seconds and she looked to be struggling. At 3.5 km her lead was 5 seconds. At 4 km it was 4 seconds. Who had the stronger kick?

Kuboki was on fire as she tried to chase down the Kenyan, who looked back for the first time just before entering the stadium and realized how close she was to losing the race. As Wylim tried to stay ahead of the charging Kuboki, from out of nowhere Nasuhara came into the stadium just behind. In a dramatic sprint finish Wylim held on, reaching the goal line in 1:07:37 to give Toyokawa its first-ever victory. Kuboki was 2nd in 1:07:41, with Nasuhara 3rd in 1:07:49, outrunning Wylim by 17 seconds and just missing the stage record by 4 seconds. Suma Gakuen was 4th and Tokiwa 5th.

Completely ignored by race broadcasters, Aomori Yamada's Felista Wanjugu, the winner of last year's first stage, delivered the performance of the ekiden, passing 18 runners to put Aomori Yamada into 14th with an incredible 15:04. Her time broke the existing anchor stage record by 27 seconds, a fact which received little more than passing mention. Race commentator, 1991 World Championships marathon silver medalist and Team Daiichi Seimei head coach Sachiko Yamashita came the closest to acknowledging the apparent efforts at this year's championships to minimize and hide the presence of foreign runners, commenting on air, "It would've been nice to see some of her run."

Fukuoka International Marathon to Go Ahead With Limited Field Size

September 12, 2020
On Sept. 12 the Fukuoka International Marathon announced that this year's race will go ahead as scheduled on Dec. 6. Usually a two-tier elite/sub-elite men's race with a field of around 400, this year's race will be cut back dramatically. Along with an elite invited field of probably 10 men, the field this year will be limited to the 80 fastest applicants with marathon qualifying marks under 2:25:00 and the 10 fastest with half marathon bests under 1:04:00. This eliminates the B-group start in Ohori Park, with the entire field starting on the track at Heiwadai Field.

Most notably for the event's "international" self-designation, applications will be "limited to runners who are able to enter and stay in Japan as of September 14 (Mon.), the day on which applications open." That pretty well eliminates anyone who is not a Japanese citizen or already a resident, even in the event of liberalization of Japan's restrictive anti-COVID immigration polici…
2 comments
Read more

September 15, 2020
On Sept. 15 the Japanese government announced its proposal for anti-coronavirus measures that would allow non-Japanese athletes wishing to compete at next summer's postponed Tokyo Olympic and Paralympic Games to enter the country. Along with at least five tests for COVID-19 prior to competition, foreign athletes must submit a detailed itinerary of their planned movements within the country and a written oath to abide by the submitted plan. Rules and consequences for dealing with violations are still under discussion. The complete proposal is expected to be presented at a government planning meeting next week.

Under the proposal, the first test must be carried out less than 72 hours prior to departure and must return a negative result. Another test must be done at the airport upon arrival in Japan, another when entering the team's pre-Olympic base or host town, another when entering the Athletes' Village, and another before competing. Beyond these five tests, athletes will…
Post a Comment
Read more

September 14, 2020
With regard to the Japanese national team's participation in the 24th World Half Marathon Championships Oct. 17 in Gdynia, Poland, because current circumstances make it impossible to ensure that the team will be able to compete in an environment of adequate safety, we hereby announce that the decision has been made to withdraw the Japanese team.

At the present time, Japan's Ministry of Foreign Affairs has issued a Level 3 infectious disease advisory, recommending cancelation of non-essential travel, for host country Poland. There does not appear to be any chance of a change for the better in that advisory prior to race date. Although it is possible to travel to Poland, the Japanese government's strong recommendation for a 14-day self-quarantine at home, avoidance of public transportation including from the airport to home, and other self-restrictions after returning to Japan makes it difficult to establish an adequate support system for the athletes.