Fujiwara in Fukuoka: "I'm Not Going to End Up A One-Hit Wonder" 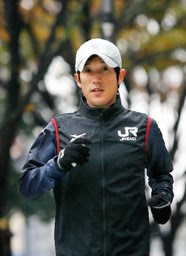 Reduced to 'one-hit wonder' status, Arata Fujiwara's career stands on the edge of a cliff. "It's scary, you know?" he says. "If I blow it in Fukuoka then that's all I'm going to hear the rest of my life." Coming into last February's Tokyo Marathon as an unknown individual entrant, Fujiwara's stock soared after he finished 2nd in 2:08:40. Was it just a fluke? Fujiwara is ready to face the answer to this question in the Dec. 7 Fukuoka International Marathon.

In his three marathons to date Fujiwara has seen both heaven and hell. In his debut, the 2007 Biwako Mainichi Marathon, Fujiwara ran an amateur-quality 2:38:37. In Tokyo he took 30 minutes off his best time but he was not selected for the Beijing Olympic marathon team. To wipe away the bad taste this experience left him with Fujiwara ran October's Chicago Marathon, but he fell away from the lead pack after only 10 km, again finishing with the amateurs in 2:23:10.

Fujiwara has always had big ups and downs in his running. A month before Tokyo, Fujiwara, who runs for Team JR East Japan, went to a training camp with Team Konica Minolta. He did three training runs in the 40-45 km range, but they were all failures. "My concentration only focuses every month and a half," he says with a wry smile. Over time he believes he has found the reason. "I think it might be my form. It's not something technical like having to swing my arms more, it's just that the right feeling comes and goes."

With this in mind, Fujiwara is constantly looking for ways to improve his control over his body. Every day he does online research into training methods used by top athletes from around the world. "If I can get faster by thinking intelligently about my running then that seems like a better way to go than just training hard all the time."

This study of the marathon has become the seed for Fujiwara's growth. In his days at Isahaya High School in Nagasaki he learned to run using the pitch method, a system focusing on low-impact, high leg turnover running. His coach told Fujiwara, "You're going to be one of the best runners in Japan someday." The words rang through the young runner like the beat of a taiko drum and left a lasting mark. He is now trying to adapt the lessons he learned in high school to meet the demands of the marathon, gradually developing a longer stride similar to that of stride method runners. "Right now I'm working on ways to redirect the impact of each step into speed," he explains. This desire to develop his training himself and to focus on the kind of training he feels is best is the main reason Fujiwara declined offers from many of the top jitsugyodan teams after university, instead joining Team JR East Japan in only its second year of existence.

"I don't read a lot, but I enjoy it," Fujiwara says. He is currently reading a set of travelogues from the Meiji Era [1868-1912]. "I'd like to travel but I can't, so this kind of makes up for it." With this Sunday's Fukuoka International Marathon designated as a selection race for the 2009 World Championships, the top Japanese finisher will earn a ticket to Berlin. Fujiwara may well get his chance to see Europe.

Anonymous said…
Brett - As you develop the website, will you add a training section with workout information from the top runners as well as video and pics as referenced in this article? Great Stuff
December 3, 2008 at 12:25 PM

Anonymous said…
i have to agree with the previous poster. Try to glean some more training logs from the 2nd Wind gals and others.
December 17, 2008 at 8:47 PM