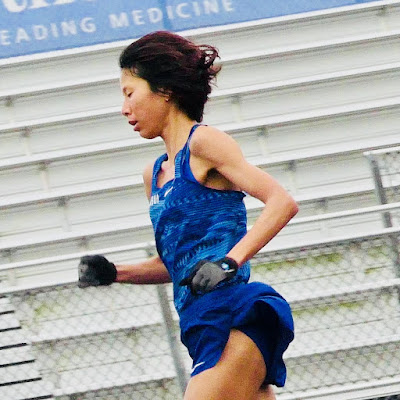 "I hate running. There's only pain. But, it's work and I'm getting paid to do it, so I can't say that I hate it. I have to do my job." Still, she's come right out and said it without hiding her words. Hitomi Niiya (32, Sekisui Kagaku) isn't your average athlete. She's the leader of Japanese women's long distance, having set a new national record of 1:06:38 for the half marathon in January this year. She's a pro who cares about her results and lives by the words, "running fast is all that matters."
Despite scintillating 9th place and 5th place finishes in the 10000 m at the 2012 London Olympics and 2013 Moscow World Championships, she retired in 2014 at the age of just 25. Returning to racing in June, 2018, within two years she was breaking PB after PB and had the Tokyo Olympics in range. Having said that she would "absolutely never" do another marathon, she now says, "there's a possibility." She's a natural born talent, and with a coach she trusts she's bounding up the steps toward the top level of the sport worldwide.
In 2007 Niiya won the first Tokyo Marathon at the age of 18, but after several failed attempts she gave them up. Since her return she has focused on the 10000 m, but after finishing only 11th at the Doha World Championships her coach Masato Yokota had her try things outside her speciality including the half marathon and 1500 m. As she took on these new challenges her thinking started to change.
Right after her half marathon national record in January Niya said with no ambiguity that she would "absolutely never" do another marathon. But things are different now. If you look abroad, Sifan Hassan (Netherlands) won the 1500 m and 10000 m gold medals at the 2019 World Championships. The kind of boundaries that used to exist between middle and long distance, between road and track racing, are evaporating, and Niiya has come to realize that.
"The world evolves constantly, so we have to evolve too," she says. "Not just marathons, not just middle distance or long distance on the track, but in every area that we can develop our potential. Thanks to coach Yokota my anxiety about long distances has been fading. I'm not dead set against a marathon like I used to be, and I can feel that the possibility is there. If I just say that I'm not good at them or hate them, I won't get any work."
If Niiya actually did a serious marathon, what kind of time could she run? Speculation as to the answer is the stuff of fans' dreams. But first she has to get the job done in the 10000 m. She has already run the qualifying time for the Tokyo Olympics, so if she wins the Dec. 4 National Championships on Dec. 4 she will be at the Olympics for sure. "The plan is to win with a national record," she says. "That's what I'm training for." The current national record, 30:48.89, was set 18 years ago by Yoko Shibui. As of right now Niiya looks to have the momentum, support crew and overall vibe to clear such an ambitious hurdle.
photo © 2020 Masato Yokota, all rights reserved
source articles:
https://www.jiji.com/sp/v4?id=202011tfniiya0001
translated and edited by Brett Larner

zatopek said…
That's kind of sad if it is true that running is nothing but pain for her. Even for a top level runner some of her runs should be fun/easy.
November 20, 2020 at 2:23 AM

Stefan said…
Given her half marathon record, if she embraces the marathon challenge I believe she can definitely go below 2hrs20min and even go so far as to challenge for the national record. And her age should not been an obstacle given that the great Eliud Kipchoge is 36 years old. Of course, injuries can play a big part in all this. I would love to see it. Is she competing in this weekend's exiden? Her big national championship race is just around the corner on Dec 4?
November 20, 2020 at 12:43 PM

Stefan said…
It would be incredible to see her run that time for a marathon. It really would. And what's more it would raise the standard for her peers in the event.
November 21, 2020 at 2:09 AM

Andrew Armiger said…
I do hope Niiya embraces the marathon, she is an electric performer.
November 21, 2020 at 3:27 AM

November 10, 2020
On Nov. 9 on its website the JAAF published the results of a research report looking at 787 races and track meets nationwide held during the period from July 1, when competitions resumed following months of cancelations and postponements in the early days of the coronavirus crisis, through Oct. 4. The report documented only one case of someone who was involved in one of the races contracting COVID-19 in the two weeks following the event they attended. The study surveyed 53 organizations including the JAAF and corporate and collegiate league governing bodies. As of Nov. 6, 47 of the groups had returned responses. A total of 571,401 athletes and 98,035 officials and staff took part in the 787 races covered by the survey. 529 of those events were held without spectators, and JAAF guidelines specify safety measures such as simplified opening ceremonies and race staff wearing masks and goggles when assisting struggling athletes. source article: https://news.yahoo.co.jp/articles/7034bbd52
Post a Comment
Read more

November 22, 2020
The 2020 Queens Ekiden , the season-ending national championships race for Japan's corporate women, was about as good an example as you could ask for of why it takes an entire team to win a top-level ekiden, not just a couple of star runners. Princess Ekiden qualifying race winner Sekisui Kagaku hoped that the addition of middle distance national champion Ran Urabe and half marathon national record holder Hitomi Niiya to its roster would be enough to knock out defending champ Japan Post and take its first-ever national title. Over the first half of the six-stage, 42.195 km race things went according to plan, leading runner Sayaka Sato putting Sekisui Kagaku in 3rd, Urabe moving them up to 2nd, and Niiya delivering a 33:20 course record for the 10.9 km Third Stage, splitting 30:31 for 10 km en route, taking 1:10 off the CR and putting Sekisui 55 seconds out front. Japan Post stayed steady after losing the leading position that its first runner Ririka Hironaka had given it, st
2 comments
Read more