Four and a half years ago JRN published a look at 20 years' worth of the Hakone Ekiden and the relationship between development at the university level on Japan's Hakone circuit and later success in the marathon. There are a lot more important things going on right now, but, since we've got some time on our hands, let's follow up on where things have gone since then and what might still be ahead.

In the original article I wrote, "In the next 4-6 years we are going to see a lot more Japanese marathoners running fast times, the first really significant overall change in Japanese men's marathoning since Barcelona ('92).....Once that ball gets rolling we should see an impact on the all-time marathon lists and when that happens you are talking real times. There's nothing to suggest Japanese men are going to start running 2:03 or 2:04 marathons, but given the numbers involved 2:07 and 2:08 should become normal, with 2:06 in range of the top men the way 2:07 is now.....Maybe 2:05 is possible after all."

Since then the national record has gone to 2:05:29, four men have run 2:06, eight have run 2:07, and fifteen have run 2:08. In just about every case that's about half the total number of Japanese men to have ever run those kinds of times. Between the announcement of the Project Exceed cash bonus system for a national record or sub-2:08 time and the Marathon Grand Championship qualifying system for the 2020 Tokyo Olympic marathon team things happened a little earlier than expected, and, more recently, changes in shoe technology have played a role in what people are capable of doing, or at least of being willing to risk an attempt to do.

The table at the top is the breakdown of performances used in both the original article and this one to calculate athlete and team levels. The levels in some of the graphs below refer to the levels on this breakdown. All graphs are normalized to account for small changes in the number of teams running Hakone over the years. Top-tier athletes, "ace runners" as they're called in Japan, are considered anyone under at least one of the Level 7 times. 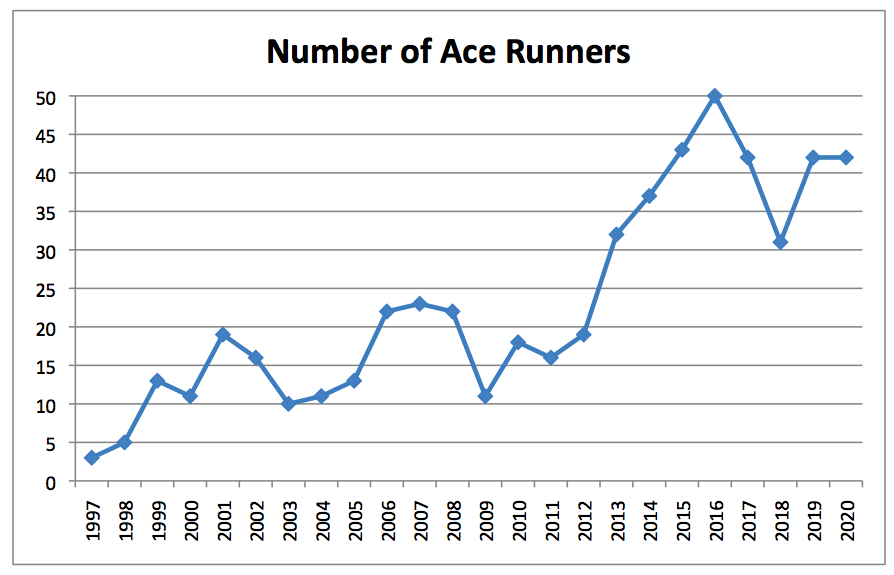 After a steady and rapid rise in the number of athletes at the ace level from 2011 to 2016, numbers declined in 2017 and 2018 before turning back around over the last two years. Overall, there has been no real change since 2015. 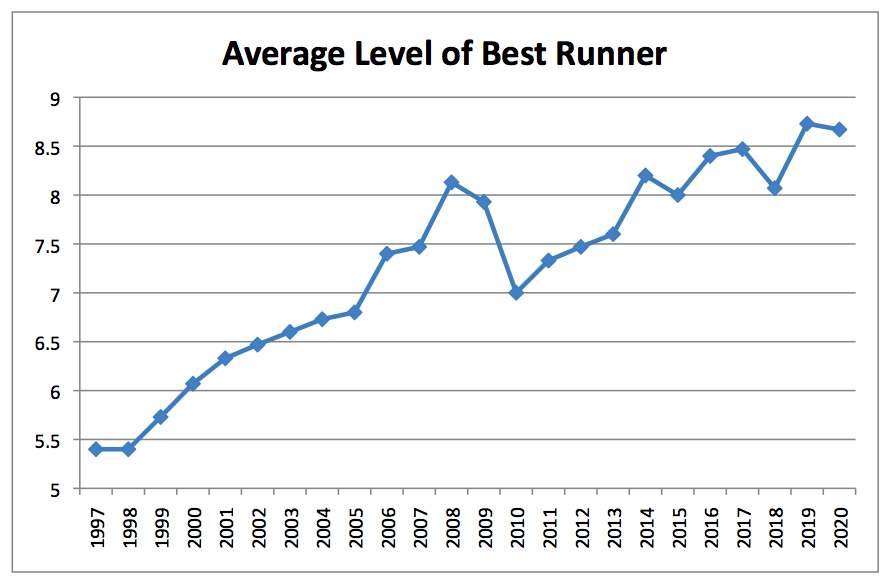 In terms of the average level of each team's best athlete, after a slight increase in 2017 the level again dropped in 2018 before returning in 2019. The level fell slightly this year, but overall it has improved almost linearly since 2010. 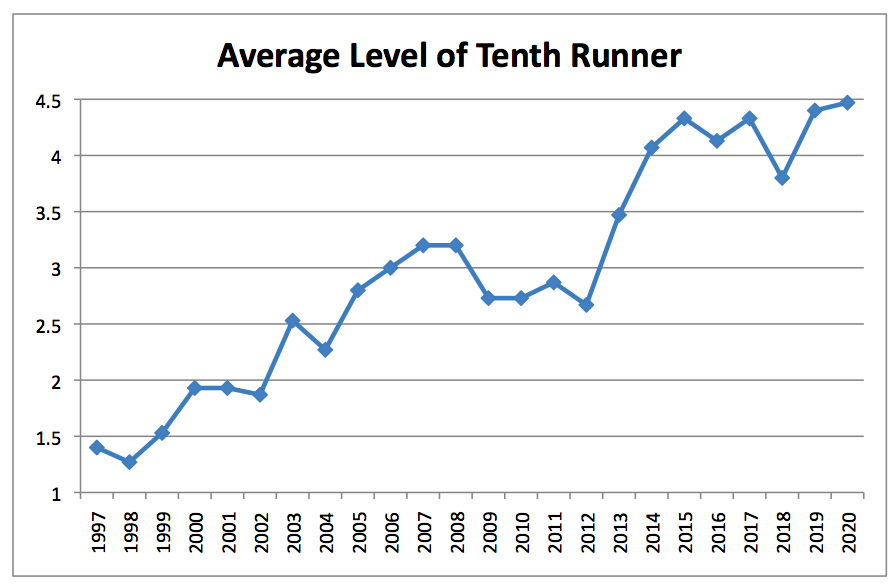 Hakone features ten-man starting rosters, and almost the same pattern was seen for the average of each team's tenth-best runner as for its star runners, a slight increase in 2017, a drop in 2018, and a return in 2019 to a record-breaking level. In this case the number continued to improve to new levels in 2020, indicating increased depth of quality. After explosive growth in 2013 and 2014 progress has been slower but steady except for the dip in 2018. On average, teams' tenth runners are now almost as good as the very best runners of 25 years ago. 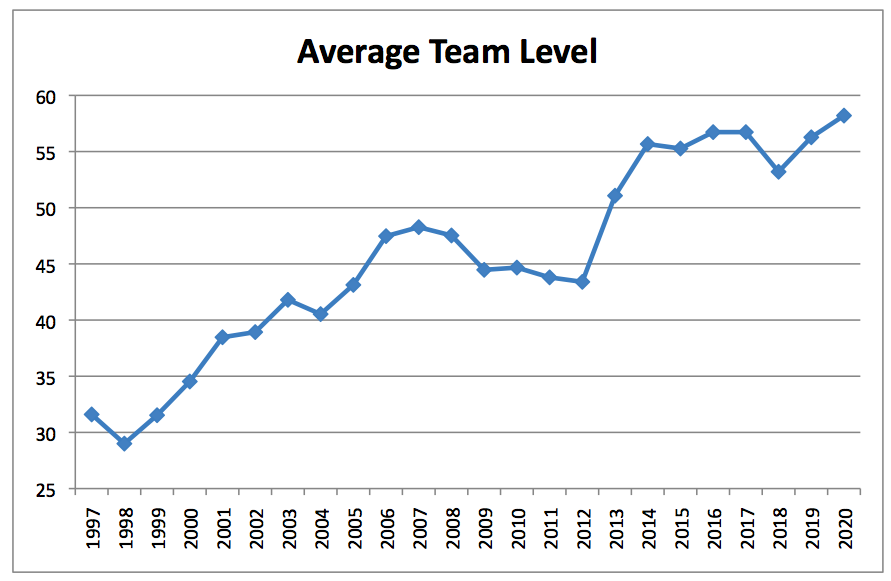 This improvement was mirrored in the average team level, which, after rapid development in 2013 and 2014, has seen slow but steady growth since 2014 apart from a drop in 2018 from which it has since recovered to new and record-breaking levels. The average team level this year was higher than that of the best team in the Hakone field as recently as 2010, and has been that way every year since 2014 except for 2018. 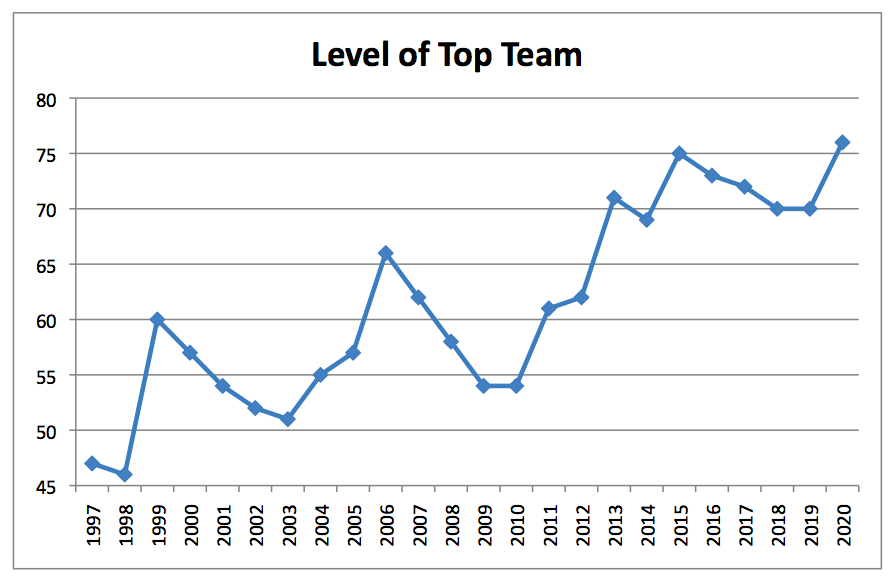 Looking only at the best team in the field, the pattern has been somewhat different. declining after 2015 before bouncing back this year to a new level. It's interesting that exactly every seven years there has been a spike with a team reaching a new height, and that the rate of improvement from one peak to the next has been almost the same, from the 1999 Yamanashi Gakuin University team at 60 points to Tokai University in 2006 at 66 points to Komazawa University in 2013 at 71 points to this year's Komazawa lineup at 76 points.

Things didn't dip as much between 2013 and 2020 as between previous peaks, but given the timing of the intermediate 2015 peak, near the end of the time when the last group of people who could realistically target the 2020 Olympic marathon team were going through, it's not hard to understand why that probably was. The drop in 2018 probably reflects the same, with the highly motivated generation that would represent Japan in a home-soil Olympic marathon out of the way and the next generation still finding its feet.

The main question about the progress to new levels over the last two years would of course be how much of it was due to new shoe technology and how much of it was "real." If you want to take the most pessimistic case and put it all down to the shoes, then things are probably "really" at about the level they were in 2013 or 2014, when all three people named to the Tokyo Olympics men's marathon squad, Shogo Nakamura, Yuma Hattori and Suguru Osako, and future 2:06 marathoners Yuta Shitara, Ryu Takaku and Hiroto Inoue were all running Hakone. And that's not too bad. Factor in the shoes and the prospects look even better.

There's no telling how hard an impact the coronavirus crisis and its resulting economic effects are going to have on the opportunities for the current post-Tokyo 2020 generation to reach the potential they show in the same was that Nakamura's did. Even before the crisis started there was a lot of talk about the corporate team system cutting way back after the Olympics on the kind of investment they had made to try to get their people there. Limited opportunities to compete or travel for training seem inevitable for at least the next two or three years, and it's hard to see that not affecting what people can achieve.

But on paper, at least, supported by the reality of the roads and track over the last four or five years, they've got the people to keep this going if the opportunity is there. Collegiate development looks stable, still growing, like the promise that flowered over the last couple of years is set to become a regular harvest, even if it's with a bit of carbon plated fertilizer. They may not be more and more of the very best, but their very best keep getting better, and so are their second-tier teammates, and in every other respect things are still ticking upward. And whatever cutbacks are ahead that's a little bit of a reason for optimism. I know I can use some of that right now. How about you?

CK said…
Insightful analysis as always.
And many thanks for the embedded videos in a number of your recent series of significant nostalgia. Incomplete memory has transformed a few of these into kind-of-new-races to be enjoyed for kind-of-the-first-time with a curious element of deja vu. Fukuoka from the 1980s,etc - I could waste an entire week watching these...
June 1, 2020 at 11:45 PM

Andrew Armiger said…
There is definite intrigue in seeing where all this goes! Arigato
June 4, 2020 at 10:00 AM