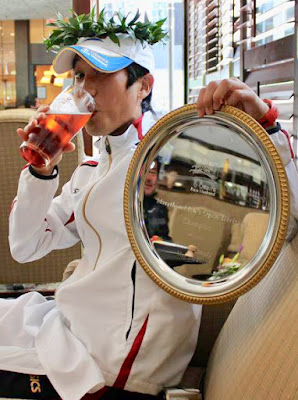 Translator's note: The most wildly unpredictable of Japan's elite marathoners, Fujiwara's achievements included a 2:07:48 PB that at the time ranked him all-time Japanese #7, a 2:09:34 course record at the 2010 Ottawa Marathon that made him the first Japanese man in 23 years to win a marathon outside Japan sub-2:10, three 2nd-place finishes at the Tokyo Marathon, becoming only the fifth Japanese man to score five career sub-2:10s, and representing Japan at the 2009 Berlin World Championships and 2012 London Olympics. His 2010 decision to quit the corporate league system and get individual sponsorship led the way for others including future national record holder Suguru Osako and Hakone Ekiden star Daichi Kamino to do the same.