Inoue Returns from New Zealand Training Camp Ahead of Boston: "More Than Just Running It I Want to Win" 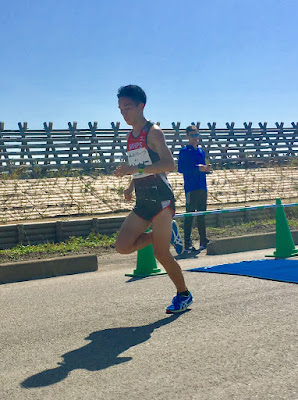 Don't set limits on yourself. 2018 Jakarta Asian Games marathon gold medalist and all-time Japanese #5 man at 2:06:54, Hiroto Inoue (26, MHPS) returned to Japan on Jan. 31 after three weeks of training in New Zealand for the Apr. 15 Boston Marathon. Even though New Zealand was hit by a severe heat wave with temperatures going over 30˚C, he completed a 50 km run and two 40 km runs. Inoue was positive about the training camp, saying, "I built up a good base and ran according to purpose. The sunshine was brutally strong and there were days when it was really windy, but by training hard in the midst of tough conditions I've put in the groundwork to be able to handle the distance." His coach Jun Kuroki, 47, was also positive, saying, "He had no injury issues, trained well, and had a good time."

The ability to win is what he is honing now. In preparation for September's MGC Race 2020 Tokyo Olympic marathon trials, Inoue will give March's Tokyo Marathon a miss in favor of the Boston Marathon, a part of the World Marathon Majors series of the world's best marathons. "When you're planning to compete against the best you have to become stronger if you want to be number one," Inoue said. "I'm focusing on competing more than time. I want to be able to handle the changes in pace that the foreign runners will drop in a race without pacers, and to be able to use my strength to make some moves of my own. More than just running it I want to win."

In not having pacers Boston will give Inoue the same kind of experience he will face at the MGC Race, and with uphills late in the race the two courses are also similar. But in competitive level they differ. "Boston is higher-level than the MGC Race," said Inoue. A competitive race in Boston against some of the world's best will be a big boost to his self-confidence at the MGC Race. "Developing experience and ability is a cumulative process," he said.

Inoue also showed the motivation to deliver Japan's first 2:04 marathon. When he won the gold medal in Jakarta Inoue outkicked Moroccan-born El Hassan El Abbassi (Bahrain) in the home straight. In December El Abbassi ran 2:04:43. Asked about El Abbassi's time Inoue said, "I can't see how he did it at all," but of his own chances for a 2:04 he said, "I think I can do that." Quoting world record holder Eliud KIpchoge he added, "No human is limited."

Inoue's first race after returning to Japan will be the Feb. 10 Karatsu 10 Mile Road Race, where he will get an early shot at 2018 Boston winner Yuki Kawauchi (Saitama Pref. Gov't). "I'm still a bit tired, but I want to see how competitive I can be over a distance like 10 miles," Inoue said. After Karatsu he plans to run the Mar. 3 Tamana Half Marathon in Kumamoto. Following that is Boston. Balancing speed and competitive ability, each race is just one more step in Inoue's buildup to September's main event where he will face Yuma Hattori (Toyota), Suguru Osako (Nike Oregon Project) and Yuta Shitara (Honda) as one of the four favorites for the Tokyo Olympic team.