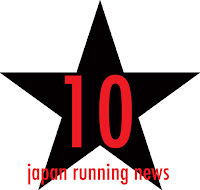 Running again in her hometown on the second day of the Osaka Track and Field Championships at Yanmar Stadium Nagai, 2014 Youth Olympics girls' 3000 m gold medalist Nozomi Musembi Takamatsu (19, Osaka T&F Assoc.) took the first step toward a comeback. Closing the gap to the runner ahead of her on the second lap, Takamatsu finished with effort to spare in 2:14.51 for 2nd. "I was able to run the way I'd envisioned," she said afterward. "I had some anxiety since it was pretty much my first real race in a year but I was able to give it my best."

After graduating from Osaka Kunei Joshi Gakuin H.S. in the spring last year Takamatsu moved to Oregon, U.S.A. to take part in the "Nike Oregon Project" elite long distance group created by Nike. With a dream of winning gold in the 5000 m or 10000 m at the 2020 Tokyo Olympics and high hopes in her heart, she crossed the ocean.

But in the U.S. she was hit by the cold hand of reality. "I was DFL every time," she said, using the Osaka slang word betta for "last place." In October last year she lined up in an indoor track race in the States. "I told myself, 'If you're DFL this time then it's time to take some time off,'" she said. With that thought in the back of her mind she ran the 800 m race, but the outcome was the same. Her heart no longer in her training, in February this year she finally gave up and left the U.S. to return home to Osaka.

Takamatsu is now under the guidance of her Kenyan father Maxwell Musembi, a former marathoner. In the mornings she works out with her younger sister Tomomi Musembi. Her family and hometown are helping to heal her broken heart. "It didn't go well over there," she said. "I'm not the type of person who gets depressed, but sometimes I cried and cried. There were times that I thought about quitting athletics, like I just didn't want to run anymore, but I think that just keeping small goals in sight reaped benefits."

Now that she is once again set upon the road toward her dream of the Tokyo Olympics, Takamatsu doesn't feel that her relocation to the United States that ended in less than a year was a total waste. She describes her position at the "Oregon Project" as "more like a trainee" than as a full member. Even so, she got nothing but support from her NOP teammates. She remains thankful to Suguru Osako, saying, "It's a car-based society there, and he helped me out when I needed to get around."

What she got from experiencing a high-level training environment remains a valuable asset for Takamatsu. "I learned a lot," she said. Once a star runner of the Osaka big city streets, after experiencing the first setback of her career Takamatsu is ready to spread her wings again.