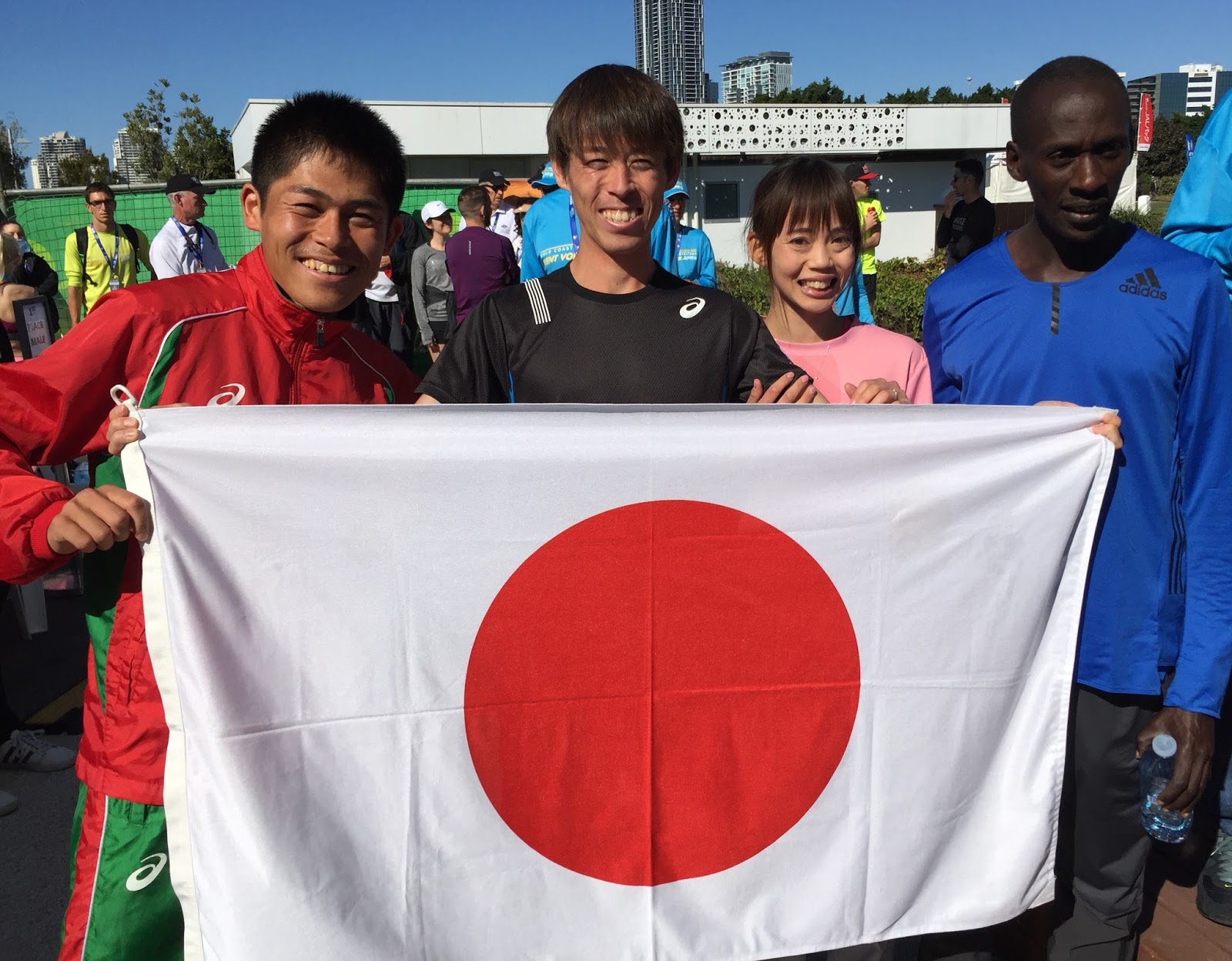 Running on his 29th birthday, Takuya Noguchi (Team Konica Minolta) became just the sixth Japanese man to ever win a marathon outside Japan in a sub-2:10 time as he shot down favorites and past champions Kenneth Mungara (Kenya) and Yuki Kawauchi (Saitama Pref. Gov't) to win the Gold Coast Airport Marathon in a 2-minte-plus PB of 2:08:59. In the women's race #1-ranked Abebech Bekele (Ethiopia) became only the second Ethiopian woman to ever win Gold Coast as she took more than a minute off the year-old course record to win in 2:25:34.

Pre-race Noguchi's wife Risa Takenaka (Team Shiseido), the 2015 Gold Coast women's winner and running again this year, told JRN that he was in better shape than she was and had come in part to try to outgun Kawauchi. With a good season behind him including a 1:02:37 half marathon PB and 2:11:04 marathon PB in February and a 1:02:21 half marathon best in May Noguchi had the momentum to see that through. Two-time defending champ Mungara had called for a 2:08 race, while Kawauchi, who is set to run the London World Championships in a month's time, had hoped only to break 2:10. 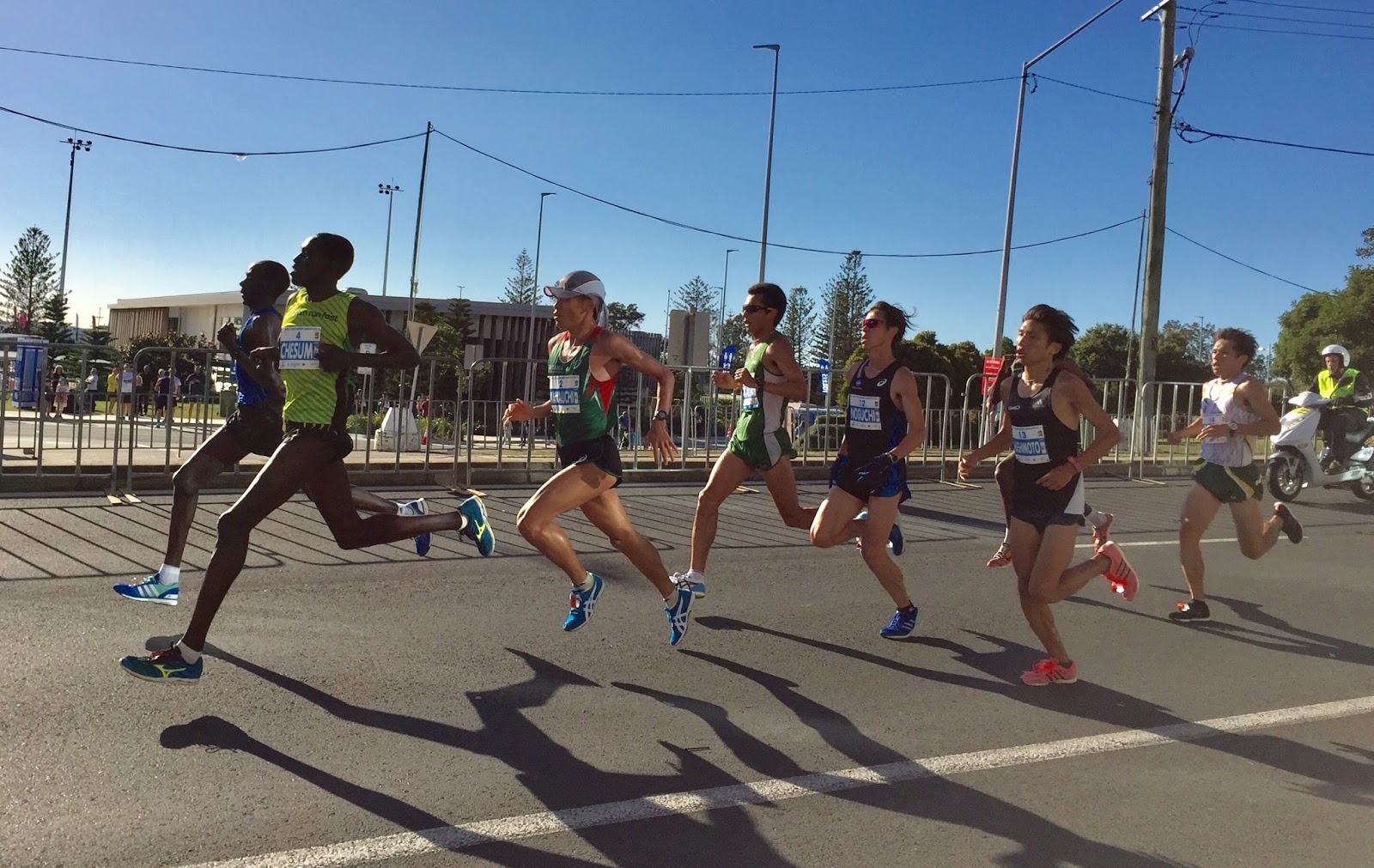 For most of the race it was right on track for Mungara's target, with Kawauchi and little-known Shoya Osaki (Team Chudenko) doing most of the frontrunning behind a trio of pacers as Mungara and Noguchi sat back. Past 30 km it was down to eight, with Mungara, 2017 Barcelona Marathon winner and Paralympian Jonah Chesum (Kenya), Kawauchi, Noguchi, Osaki and others still together. Over the next 6 km heading to the final turnaround near 37 km that shook down to just the two Kenyans, Noguchi, Kawauchi and 2016 Hofu Yomiuri Marathon winner Ryo Hashimoto (Team GMO Athletes) as the real contenders threw in a series of surges.

Round the turnaround Mungara showed his knowledge of the course with a familiar from his past wins with a surge, but surprisingly it was Noguchi who parried, attacking with a move that got rid of Chesum and Hashimoto and put Kawauchi on the ropes.  From there to the final turn into the finish area it was a replay of last year's classic, Mungara and Noguchi attacking again and again and Kawauchi unable to get back on it. Just like last year Mungara pushed the lefthand corner to the finish area with 300 m to go and opened a small lead. But where Kawauchi had been unable to make it up in the home straight last year, this time Noguchi had the answer, coming back on the final turn and opening 5 seconds on Mungara in the final straight.

With a PB of over two minutes Noguchi took the win in 2:08:59, joining greats Taisuke Kodama, Takeyuki Nakayama, Toshihiko Seko, Hiromi Taniguchi and Arata Fujiwara as the sixth Japanese man in history to win a marathon under 2:10 on foreign soil. Mungara's 2:09:04 for 2nd took more than 30 seconds off his age 43 world record, with Kawauchi setting a world record of his own. More than meeting his pre-race goal as he took 3rd in 2:09:18, Kawauchi's performance was his 23rd career sub-2:12 marathon, removing Ethiopian great Abebe Mekonnen's world record of 22 from the books. Together he and Noguchi also scored Japan's 24th and 25th sub-2:10 marathon times outside Japan to add another small piece of history to the day. 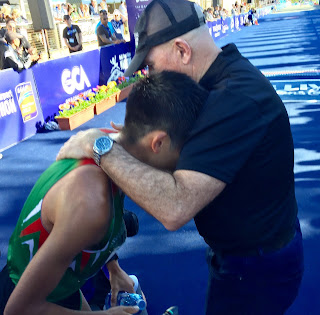 Post-race Noguchi told JRN, "The last 5 km were hard and Mungara's surges were pretty scary, but I believed in myself and told myself that if I'd come this far I had to go all the way." "He was very strong," said Mungara. Kawauchi agreed, telling JRN, "I'm surprised how tough Noguchi was. He was fantastic." At the award ceremony Kawauchi pulled out a Japanese flag and handed it to Noguchi. "I brought this," he said. "I was planning on using it myself. It's yours." Just over 6 hours later Kawauchi was on a plane home to Japan, due back at work the next day.

Bekele took the women's race in hand from the start, leading a pack of five including compatriots Letebrhan Gebreslasea and Meseret Tolwak and Kenyans Mercy Kibarus and Leah Kiprono out on 2:24 pace, well under the 2:26:40 course record set last year by Japan's Misato Horie (Team Noritz). Japanese women have long owned the Gold Coast, with seven wins in the last ten years including the last five straight. The last non-Japanese winner was another Ethiopian, Goitetom Haftu, back in 2011, while no Kenyan woman had ever won. Sticking true to her plan of only targeting her 2:28:09 best, Takenaka made no effort to go with the pack, running right on target pace at 3:30-3:31/km. 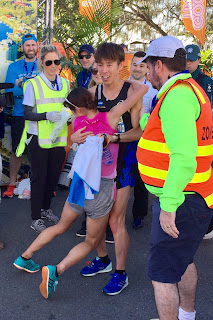 Bekele kept up the intensity as she ground down the others in the lead pack, slowing once she was on her own but sailing in 66 seconds ahead of Horie's mark in a new course record of 2:25:34. Takenaka picked up the casualties one by one, catching up to Kibarus for 2nd late in the race before losing ground again. With a few kilometers to go a spectator shouted "Your husband won!" to give Takenaka a boost.

Rallying and starting to close again, she bore down on the exhausted Kibarus in the home straight, but Kibarus had enough left to hang on to 2nd in 2:28:28. Takenaka finished 3rd just off her PB in 2:28:32, collapsing into Noguchi's arms before joining him on the podium at the award ceremony. "I was really worried before the race since my training hadn't been 100%, so I'm very relieved to have made it to 3rd," she told JRN post-race. "I thought I could get 2nd, but at least Takuya and I got to be on the podium together." Only married this spring and already Japan's fastest-ever marathon couple, after the race they will return to Japan briefly before heading to Hawaii for their honeymoon.

Men's 4th placer Hashimoto, who beat Kawauchi to win Hofu last December, took more than a minute off his best as he ran 2:10:19. His teammate and training partner Hiroki Yamagishi (Team GMO Athletes) won the Gold Coast's ASICS Half Marathon earlier the same morning, running alone after 10 km to take the win in 1:03:14. "This was part of my prep for the Hokkaido Marathon in August," he told JRN. "I can go back to Japan feeling good about how things are going." American Sara Hall won the women's race in 1:10:32 after flying in late from Ethiopia. 2015 Marugame Half Marathon winner Eloise Wellings (Australia) won the Southern Cross University 10 km in a road PB of 32:55, with Timothy Lefroy (Australia) taking a three-way sprint finish to win the men's race in 29:48.