Most of the country's corporate leagues held their regional track and field championships this weekend, but superseding them all was the Golden Grand Prix Kawasaki meet.

With a shortage of candidates for the London World Championships men's 5000 m the JAAF doctored in a sub-7:55.00 qualifying standard for men to get into next month's National Track and Field Championships, adding a 3000 m to the normally sprint, middle distance and field event GGP.  In the midst of his best season in years, Yuichiro Ueno (Team DeNA) took it out close to national record pace through the first half before abruptly slowing and dropping off the back. Rio Olympics 10000 m silver medalist Paul Tanui (Team Kyudenko) took over, with only Evans Keitany Kiptum (Team Toyota Boshoku), Hiroki Matsueda (Team Fujitsu), Hayato Seki (Tokai Univ.) and Tetsuya Yoroizaka (Team Asahi Kasei). 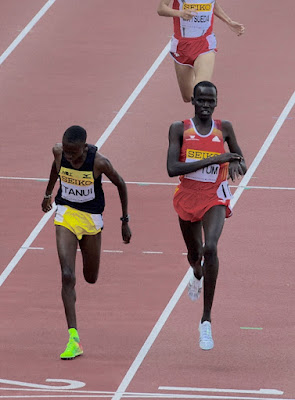 The best women's mark of the weekend also came outside the corporate regionals. At the Oita Prefecture High School Championships, local Kenyan Marta Mokaya (Oita Tomei H.S.) won the girls' 3000 m by more than a minute with a PB of 9:02.93. A meet record, Mokaya's time was also a worldwide 2017-leading time in the U18 category and put her at #2 in the U20 category behind fellow Japan-resident Kenyan high schooler Helen Ekarare (Sendai Ikuei H.S.).


Among the corporate league regionals, the best Japanese women's results came in Osaka at the Kansai Corporate meet. Up-and-coming Mao Ichiyama (Team Wacoal), age 19, pulled off an impressive double, winning Friday's 10000 m over Olympian Wacoal teammate Kayoko Fukushi in 32:48.15, then returning Saturday to win the 5000 m in 15:49.63. Getting his pro career off to a great start, 18-year-old Hyuga Endo (Team Sumitomo Denko) did his own double, winning Saturday's 5000 m in 14:00.23 and Sunday's 1500 m in 3:47.72. Both wins came in slow races with blazing sprint finishes, a good sign that Endo is handling the transition from high school straight to the pros.