With temperatures suddenly jumping ten degrees to the mid-20s former Tokyo Kokusai University star Leul Gebresilase (Ethiopia) proved the toughest in hot and sunny conditions as he won Saturday's Ottawa 10K with a long kick from a kilometer and a half out.

Back from a nearly two-year layoff due to illness, 2015 Ottawa winner Nicholas Bor (Kenya) did the early heavy lifting, shaking the lead pack down to himself, Gebresilase, Japan's Kenta Murayama (Team Asahi Kasei), Martin Hehir (U.S.A.) and Taher Belkorchi (Morocco) by 3 km. Shortly after that Murayama, running with support from JRN, started to feel dizzy and began to drift back from the pack. Belkorchi was the next to fade, leaving Gebresilase, Hehir and Bor up front by halfway.

Little changed for the next few kilometers, but between 7 and 8 km Bor abruptly faltered and dropped back. Newcomer Hehir gave it what he had, but on a sharp left turn across a bridge before 9 km Gebresilase surged and had the race in hand.

Ottawa sets up its women's and men's races in a chase format, the elite women starting with a 3:10 handicap and a $4000 bonus to the first person male or female to cross the finish line.  Rolling hard after dropping Hehir and crossing the bridge, Gebresilase passed 2nd-place woman Paskalia Chepkorir (Kenya) in the final kilometer and bore down on leader Netsanet Gudeta (Ethiopia) but came up just short. Gudeta was first across the line in 31:35 to win both the women's race and the gender challenge, Gebresilase next in 28:43 for the men's title. 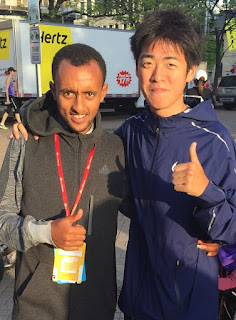 Chepkorir held onto 2nd in the women's race in 32:08, Monicah Ngige (Kenya) 3rd in 32:46. Hehir was an impressive 2nd in the men's race in 29:05, with Bor fading to a distant 3rd in 29:33. Two minutes off his goal of breaking the 28:05 Japanese national record, Murayama held off a fast-closing pack of three including Rio Olympian Eric Gillis (Canada) to take 5th in 30:01. Post-race Murayama and Gebresilase, a former training partner of his 10000 m national record holder twin brother Kota Murayama, surprised race staff by chatting at length in Japanese about their training and racing in the three years since they last met.