Sonota and Nishiyama Make It a Komazawa 1-2, Yiu Breaks own NR at Ageo City Half Marathon


text and photos by Brett Larner
video by Ekiden News 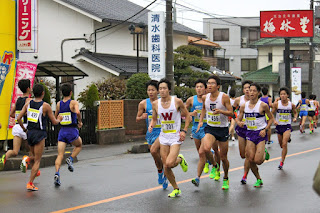 With invites to the 2016 United Airline NYC Half on the line to the top two Japanese collegiate finishers, in light rain and temps in the mid-teens the pack went out on fast on high-1:01 pace, clearing 5 km in 14:40 with a lead pack of around ten gaining separation on a larger chase pack. 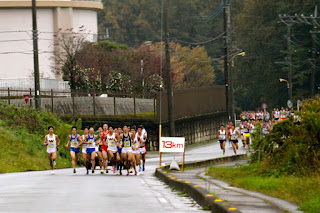 The pace slowed slightly over the next 5 km, the leaders going through 10 km in 29:33, with the chase group of around 20 still in sight.  On the most technical part of the course near 13 km the leaders slowed as the humidity rose before a move from Taiga Machizawa (Chuo Univ.) shook things up, dropping Shinichiro Nakamura (Waseda Univ.) and Fuminori Shimo (Komazawa Univ.) before regrouping in a lull before the last 5 km. 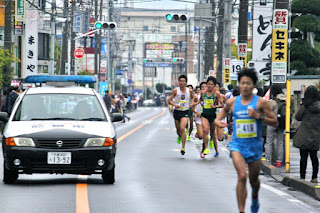 Behind them, Yuki Kawauchi (Saitama Pref. Gov't), running just two weeks after his 6th-place finish at the TCS New York City Marathon, emerged at the front of the chase pack.  As the kilometers went on towards the finish Kawauchi pushed the pace, overtaking Nakamura and Shimo and starting to come within range of the lead group. 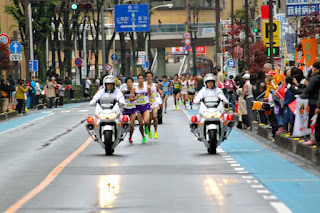 Machizawa attacked again, shaking it down to a lead quartet with Sonota, Nishiyama and Haruki Minatoya (Tokai Univ.) who had turned heads two weeks ago at the National University Men's Ekiden Championships.  Kawauchi, pursued by Waseda teammates Koki Ido and Rintaro Takeda, overtook Shota Miyagami (Tokai Univ.) to move into 5th with less than 2 km to go.

Eyes on the prize, Komazawa Nishiyama made his first move with 1 km to go, gaining a gap with only Sonota able to follow.  Heading onto the track Nishiyama seemed to have it in the bag, but, misjudging the finish, he slowed at the start line with 200 m to go.  Sonota was by him before he could realize his mistake, and with a last kick it was all he could do to hold off Minatoya for 2nd.  Sonota took the win in 1:02:48, Nishiyama next in 1:02:52, picking up the two invites for the next United Airlines NYC Half Marathon. 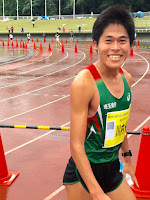 Minatoya scored a PB 1:02:54 for 3rd, Machizawa rounding out the sub-63 club in 1:02:57 for 4th.  Kawauchi held on to 5th in 1:03:11, his best time of 2015 and well ahead of his planned 1:03:30.  Kawauchi will be targeting Rio in his next race at the Dec. 6 Fukuoka International Marathon riding a positive wave after good runs in Ageo and New York.  "This was great!" he told JRN post-race.  "This was just a training run for Fukuoka but I was really moving well and can go into Fukuoka feeling confident.  2:07 and top three." 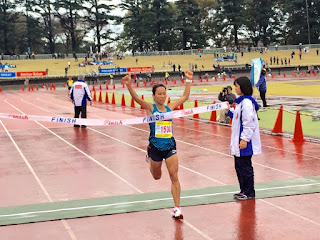 Just under 10 minutes later defending women's champion Christy Kit Ching Yiu of Hong Kong came through in 1:12:57, the fourth-fastest winning time in Ageo history, 3 1/2 minutes better than the national record she set in Ageo last year and 2 minutes better than her subsequent national record at March's Matsue Ladies Half Marathon.  A camera crew was on-hand at the finish to catch her new national record, her fourth on Japanese soil and a good step toward her goal of making next year's Rio de Janeiro Olympics.

Overall numbers at Ageo were down from the last two record-breaking years with only 360 men breaking 1:10, but the total results were still in the top five in Ageo's 28-year history for depth: 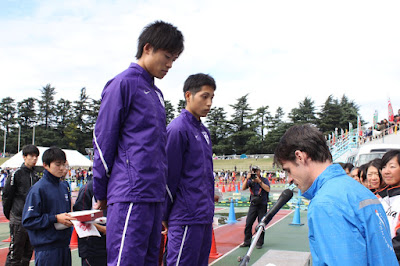